Home • Interiors • KAWS: Companionship in the Age of Loneliness 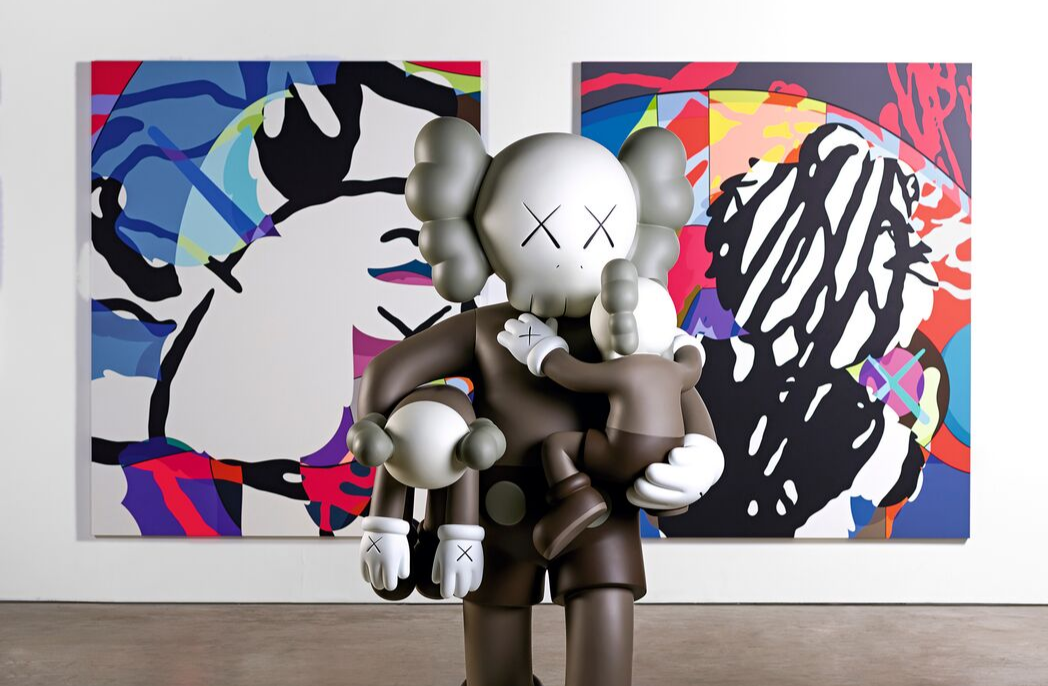 The NGV:International has opened a new exhibition – an Australian first that celebrates 25 years of the work of KAWS, aka Brian Donnelly.

The exhibition comprises over 100 works, many of which appropriate familiar pop culture figures such as The Simpsons, Sesame Street and Disney characters overlaid with KAWS’ signature character BFF or simply the familiar crosses for eyes motifs.

Most arresting is the brand new bronze sculpture Gone, which greets visitors to the gallery in the central atrium, towering seven metres over them in a Pietà pose with the Companion/Mickey Mouse and Elmo  standing in for Jesus and Mary, in much the same way that John Moran has done with Ronald McDonald and Jennifer Marman and Daniel Borins have done with E.T. and Yoda.

Elsewhere, perhaps the most engaging part of the exhibition is the accompanying child-friendly space – after all the work is deliberately bright and child-like in its references and style.

KAWS: PLAYTIME is a free and immersive exhibition revolving around the signature character BFF and giving visitors the opportunity to make videos and incorporate themselves into the works.

Born in 1974 in Jersey City, KASW attended the School of Visual Arts in New York where he received a Bachelor of Fine Arts. He went on to work for Jumbo Pictures animation studio, painting cells for animated series including Disney’s 101 Dalmatians and Doug, and MTV’s cult series Daria.

He began his artistic career outside of the traditional art world during the height of graffiti and street art culture in New York in the early 1990s. During this time, he began to develop his signature motifs, the skull and crossbones, which appeared painted over the beautiful faces of late 90s Manhattan advertising posters in what the artist refers to as ‘subvertising’.

In the late 90s, after visits to Japan and experiencing the collectible market there, KAWS began making limited edition toys, which soon became cult objects among collectors. He has since produced more than 130 toys.

KAWS’ latest paintings showcase his hallmark use of bold colours and bright lines, moving into new creative territory with his hybrid characters now dissolving into fragmented fields of colour.

“Unrestricted by conventional contemporary artistic boundaries, KAWS’s multidisciplinary and evolving practice across contexts and in collaborative ways, is representative of today’s society and the need to connect. He continues to engage new audiences through a common language of vibrant visuals and pop cultural references and characters,” says Tony Ellwood AM, director, NGV.

KAWS: Companionship in the Age of Loneliness and KAWS: PLAYTIME will be on display until 13 April 2020 at NGV International, 180 St Kilda Road, Melbourne, Australia. Tickets and information are available from the NGV website.