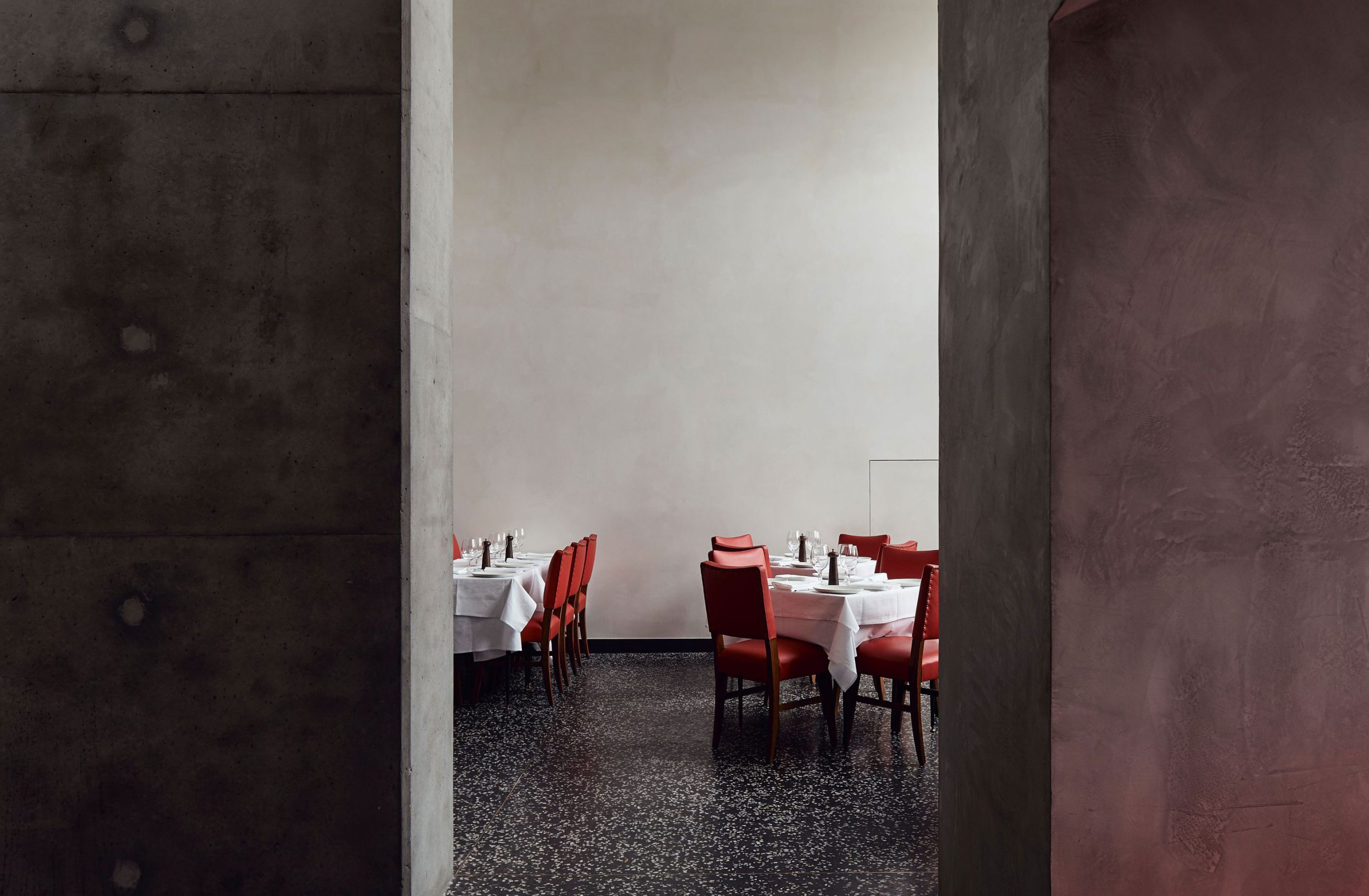 There is a fine line between what works and what falls flat when it comes to the theatrical that few can master. Hassell’s interior for Di Stasio exemplifies mastery of that divide with aplomb.

Art, particularly large-scale art, is another area where most designers are at sea. Again, Hassell has proved itself consummate with an interior scale that manages to hold both monumental projections and intimate dining.

Starting with a residential development and retail tenancy, the restaurant site was tenant-ready in plasterboard and aluminium. The client, however, was a known entity having initially commissioned Hassell to create a pastry kitchen some years previous. With a driving passion for art and, in particular, the art of Reko Rennie and Shaun Gladwell, Di Stasio was never going to be an out of the box restaurant.

Rather, both client and design team, led by Hassell associate Di Ritter, were ready to allow the space to inform their decisions to effectively ‘feel’ the space towards something exceptional.

“The whole project was organic. The way we worked wasn’t the traditional ‘do a render, make plans, do an elevation, get it built’. It was experimental; it was all derived from us running around the site pulling things together and experimenting with how things were made,” says Ritter.

To this end, the space was stripped to bare bones of exposed concrete. To create scale within the extremely large volumes – comprising six-metre ceilings in the dining room and between four and two metres in the bar – the large portions were built at one-to-one scale in chipboard, including the entry hall and bar.

“We moved it around, with a lot of model making – at first small and then life-sized – to really fully understand how the space would inhabit the pieces, and itself be inhabited in turn,” says Ritter.

One such portion made at scale, this time in cardboard, is the extraordinary pale blue Murano glass chandelier. Located in the corridor leading to the bathrooms, the chandelier in a way exemplifies the spirit of the design, where “you get to enjoy all the different moments of the restaurant experience,” says Ritter.

The corridor also houses a Reko Rennie artwork, 31-piece installation, comprising small paintings and a neon work, which, due to the confined space, you can only ever experience as a single event by being there. The same artwork can be glimpsed from the outside, where a window is bisected by a concrete wall with the art on one side only. In a world where everything is Instagram-able and laid out to be camera ready, it is a brave design that posits experience above documentation.

Materiality was addressed with an early decision to deliver the large moves with pared back clarity. “The exposed concrete is where it all started, and beyond that it really was very few simple solid elements. There are not a lot of finishes, but what is there is handmade,” says Ritter.

The terrazzo floor, for example, was hand mixed in buckets on-site, churned and poured by hand with the care of artisans. Similarly, the plaster stucco walls were hand applied and polished. The result for both floor and walls is a very fine feeling of handmade perfection that is more akin to a beautifully tailored suit than an arts and crafts object.

Much of the furniture is similarly handmade in Victoria (Dewhurst), with inspiration coming from odd finds rather than catalogues or showrooms. The chairs, for example, are based on an old Italian office chair that had horsehair and strings piling out of the seat. Obviously, the working versions are intact, but there remains a feeling of nostalgia and weight to the chairs that can’t be forged. Additional furniture was sourced from Grazia & Co.

Spatially and dynamically the bar is physically balanced by horizontal weight before art and an angle create a soaring presence: “When you are stripping back to the basics you see things that are fantastic. The underside of the car park ramp was something we knew we wanted to keep,” says Ritter of the angled ceiling line that shifts from four metres on one side to an intimate two at the other.

A long bar of Carrara marble provides an intimate and humanising scale, while also gently reflecting the slowly moving images from the wall behind the Di Stasio bar.

Drawing parallels between the obscenity of flagrant wealth embodied in the Rolls-Royce Corniche of 1973 (the artist was born in 1974) and the displaced Aboriginal people of rural Australia, the work uses camouflage to overlay the need for visible identity of culture – on a symbol of colonialism.

Viewed from above, the landscape shifts from mauve, orange and green, to orange and then yellow as dust builds. Within the car, Rennie has a photo on the dashboard of his grandmother (a stolen generation Australian Aboriginal woman) with the artist on her lap. How the artwork interacts with the room, however, adds to both the experience of the artwork and the interior experience of the bar. Granted it is an immersive way of viewing the work, but it is the way the colour shifts in the work create colour temperatures that change to the whole room.

On a technical note, the projectors are close to the wall to avoid blinding the Di Stasio bar staff. Lighting has been adjusted for day and night to facilitate video legibility and the actual digital films are extremely sharp to mitigate surface nuance of the stucco walls.

For the dining room, the technical concerns were amplified from four metres to six, with the lighting (Clearlight) needing to pass through the projected image to the tables below. Occupying the entire wall, Shaun Gladwell’s Nancy Bird 2, which was developed for the project, shows a swimmer perpetually moving forward. The scale is even more exaggerated here, with the chairs and tables providing a lower layer of warm caramels and mushroom.

The red half glazing of the entrance door pervades through to this area with a soft warm glow that warms the wall, but is negated by the projected image. It is an extraordinary manipulation of light that sets the image as though within a frame, when in fact all the walls are a uniform soft off-white. Another artwork by Gladwell, which shows a hand perpetually walking across a surface, will be rotated into play with time.

Where the balance lies is in the design’s ability to support the artworks, make them the hero, then let them slide from and into focus as dictated by the individual. Effectively, the immersion at Di Stasio becomes light and colour or image as attention shifts. But then the journey to the bathroom triggers the senses and brings attention back to the art, arresting the viewer again on return to the restaurant or bar.

This isn’t the only project Hassell has recently completed with theatrical flair. The Melbourne practice also lent its style to the kaleidoscopic Cafe Lafayette, which beckons diners with neon fingers.