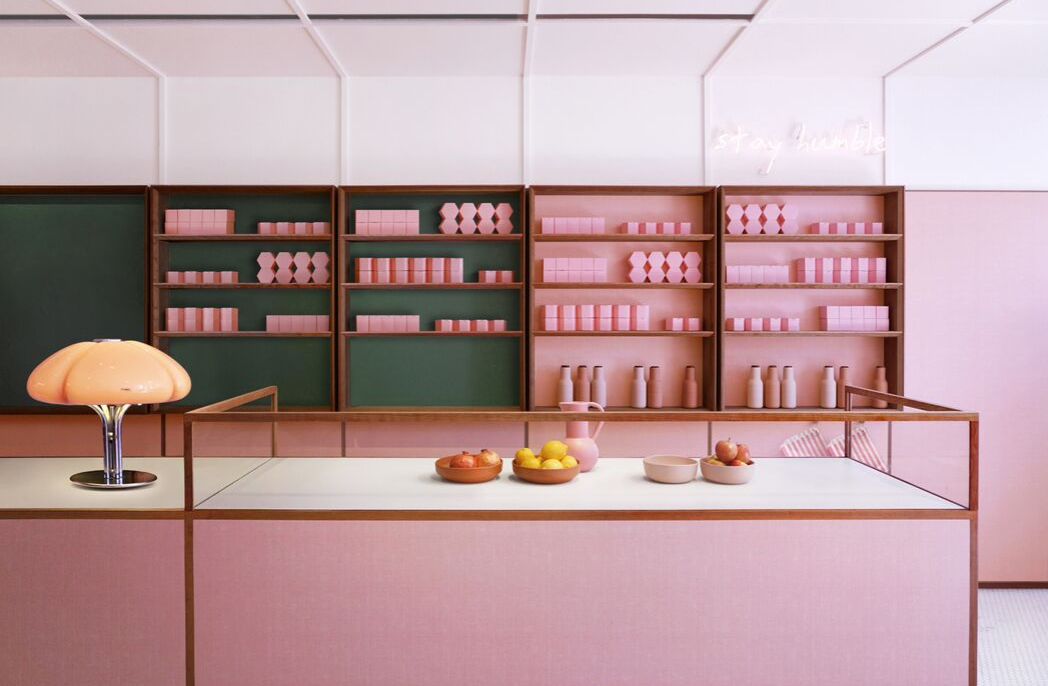 The inspiration for the design came from the staple of British vernacular post-war architecture – the ‘Formica caffs’, which first appeared in London’s West End in the 1950s, several of them surviving intact to this day. 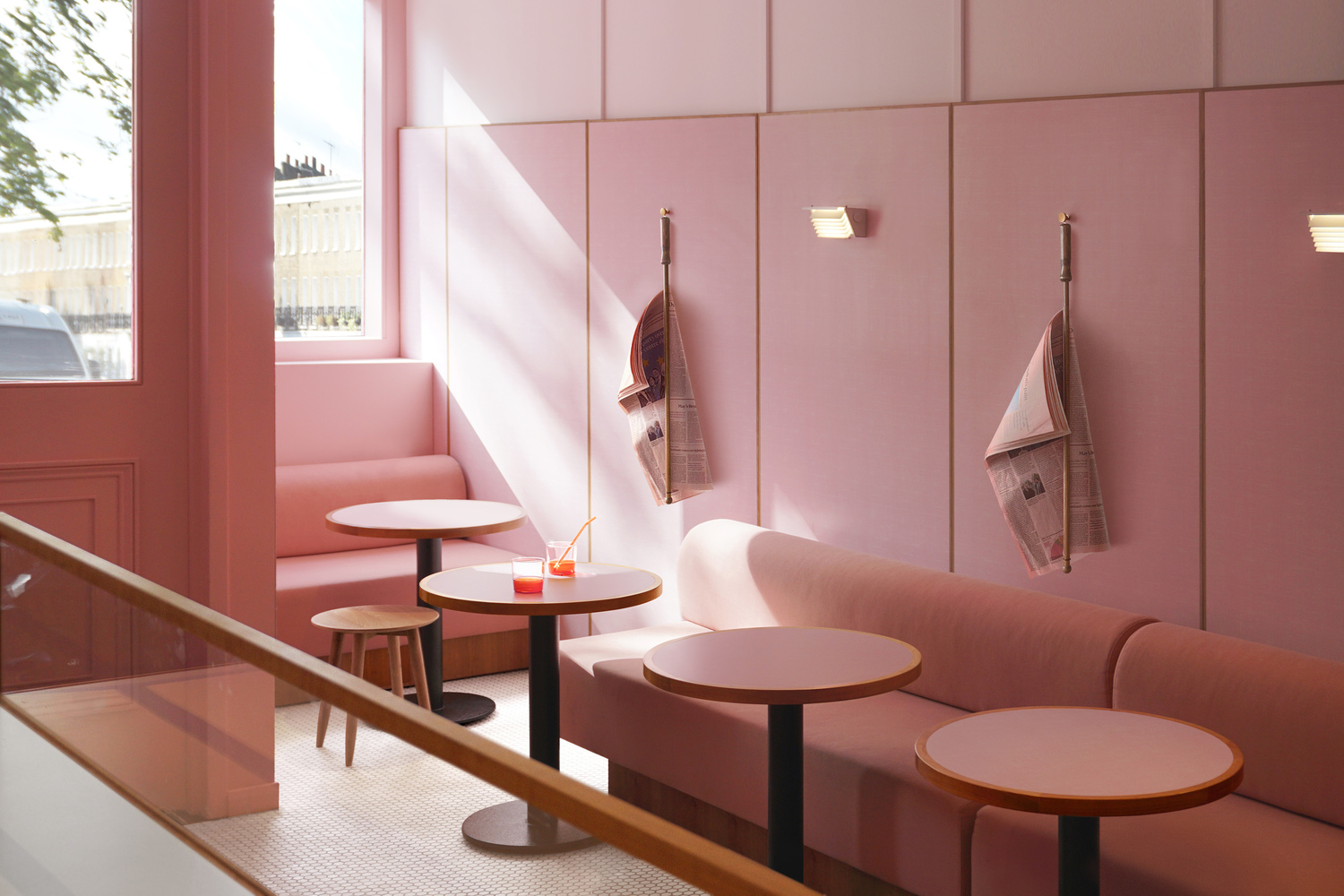 Established by Italian immigrant families, those coffee bars served simple snacks and drinks in a pared-back modernist setting featuring laminate surfaces, pastel colours and cosy seating nooks and crannies. This was the beginning of the ‘cafe culture’ in London with King’s Road at the epicentre, attracting writers, musicians, photographers and bohemian characters of all styles. 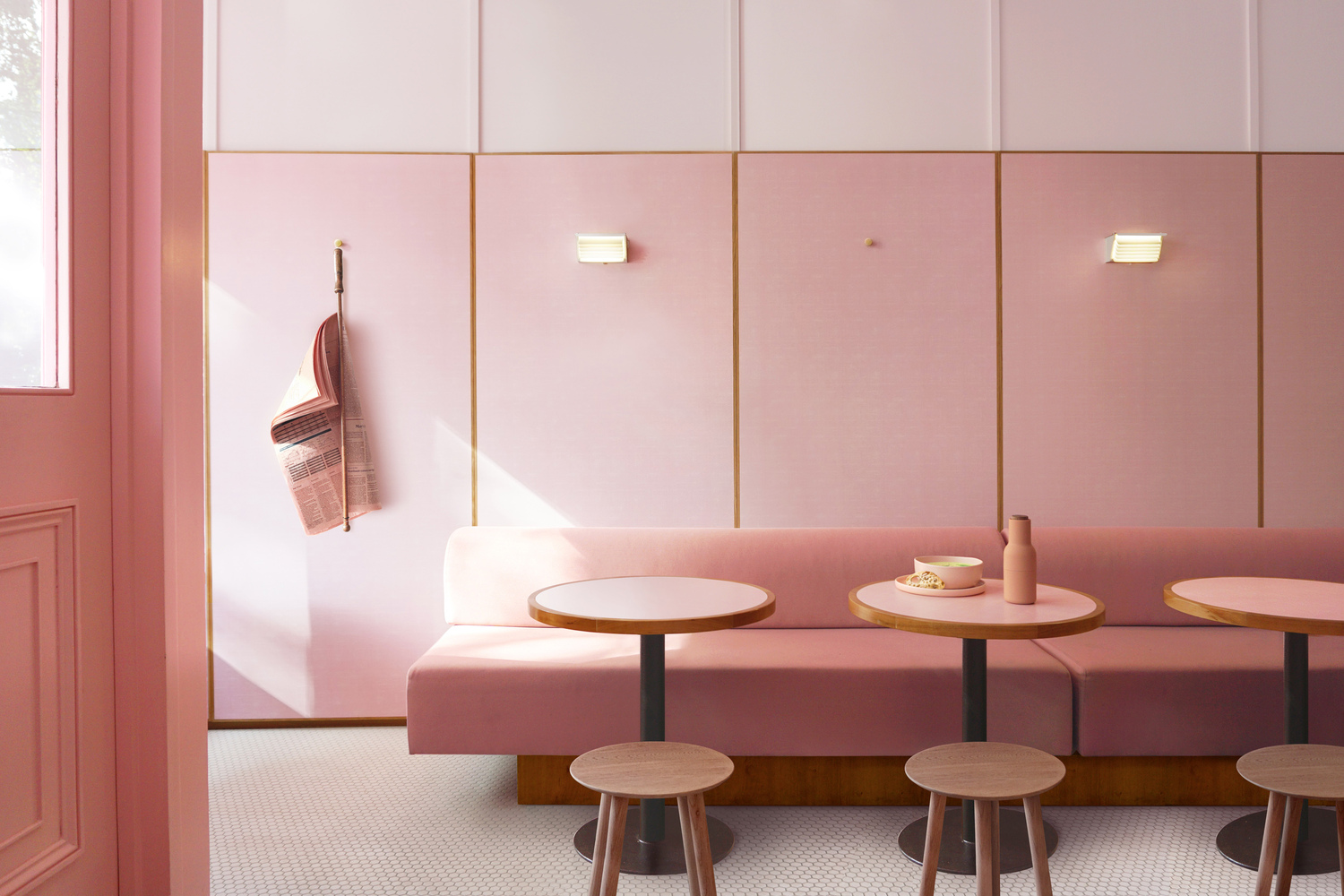 The interior is clad in wall-to-wall pink Formica, which continues along counter fronts and across tabletops. The rhythmic pattern is highlighted with cherry wood, framing each laminate panel. The designers worked with Formica factory to recreate the original ‘linen’ pattern design popular in the 1970s, opting for a suitably ‘Millennial pink’ shade. 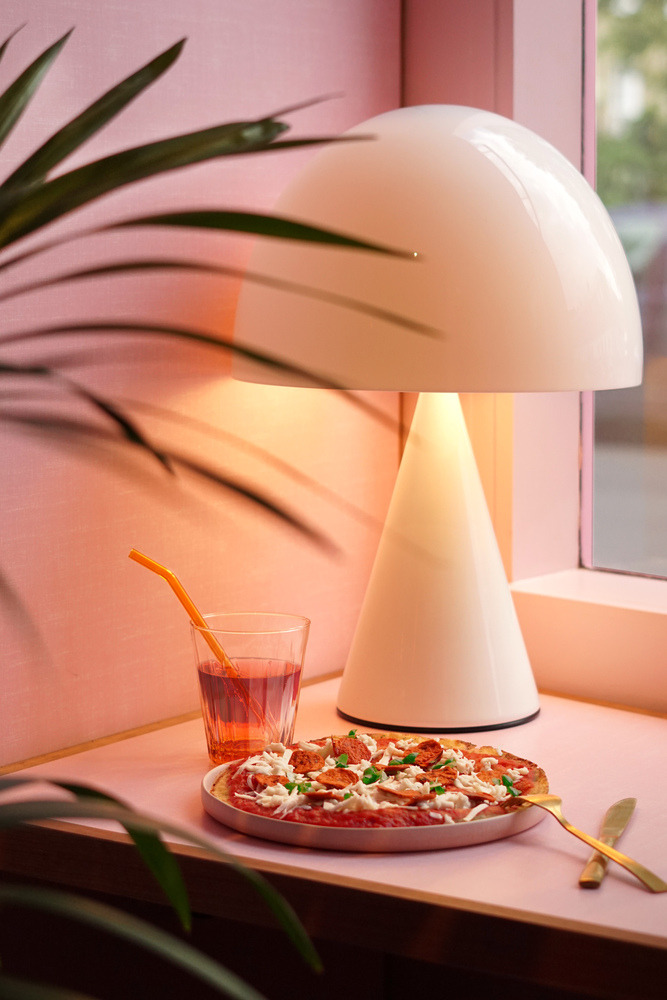 Other subtle nods to the past include mosaic tiled flooring, cherry wood shelving and neon signage. The cafe is accessorised with the classic mid-century lighting pieces by European designers Poul Henningsen, Jacques Biny and Luigi Massoni. 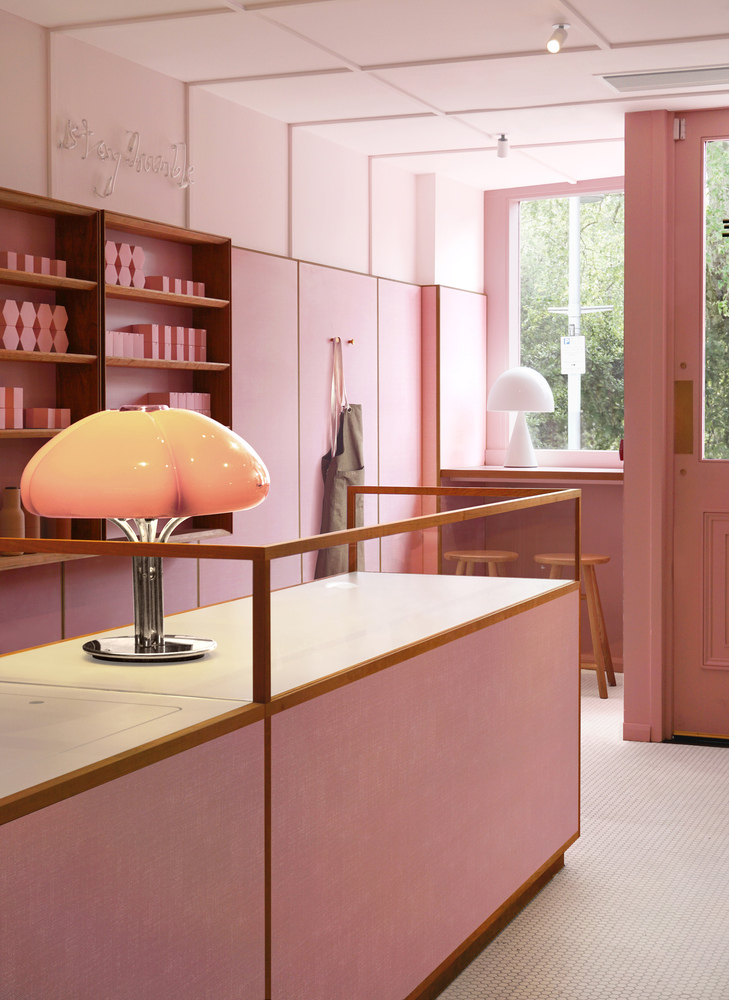 “We have long been attracted to the cinematic quality of London’s ‘Formica cafes’, the duality of Modernist design language and the playful, almost cartoonish spirit. This project aims to create a contemporary version of this unique typology,” say Chieh Huang and Alexey Kostikov of the London-based Child Studio. 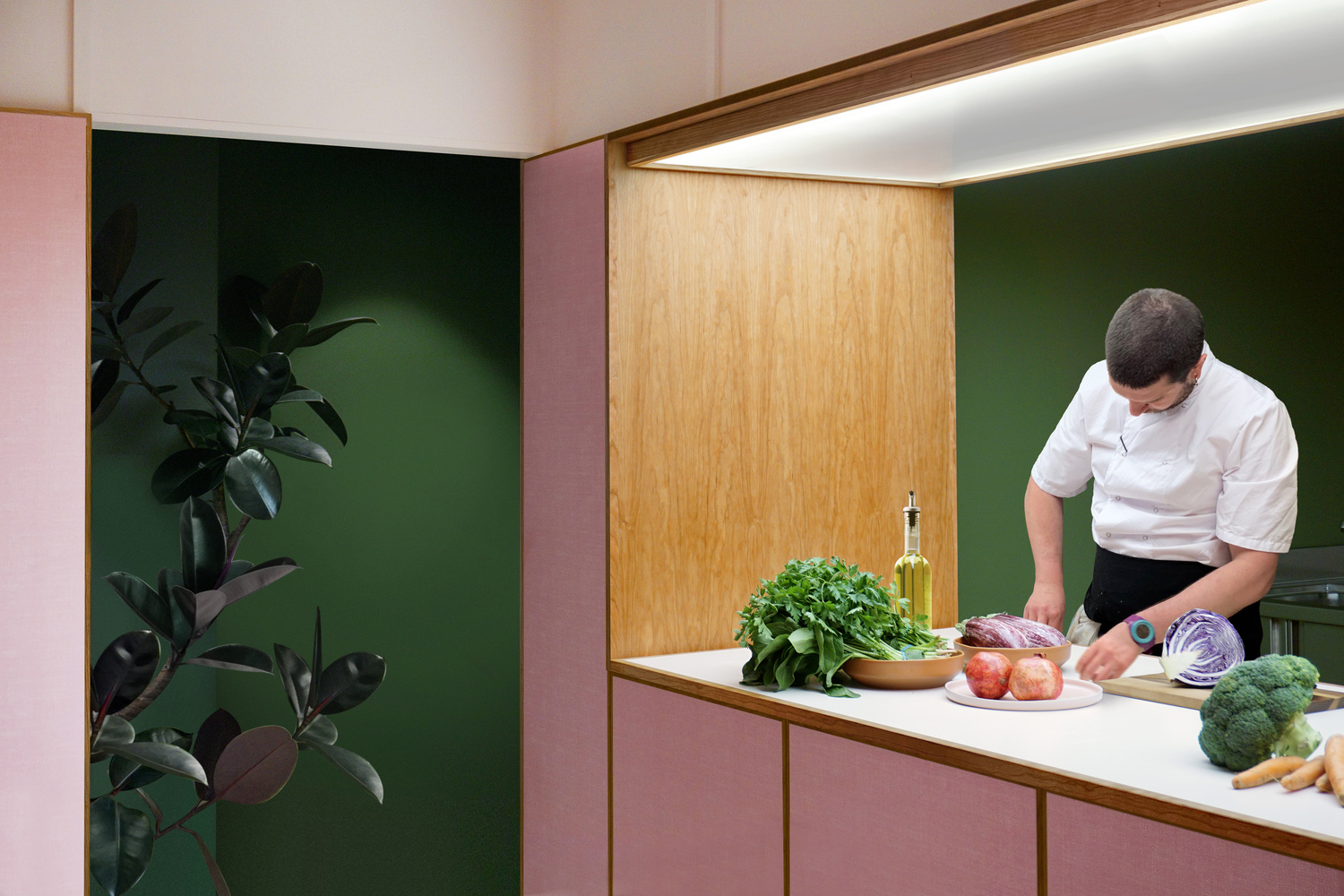 The cafe sits behind a period timber shopfront. The facade was stripped back from the later additions to reveal the original features, including the ornate cast-iron grilles. The long and narrow floor plan informed the layout with a long banquette seat flanking one side and a 5.5-metre display counter located along the opposite wall. 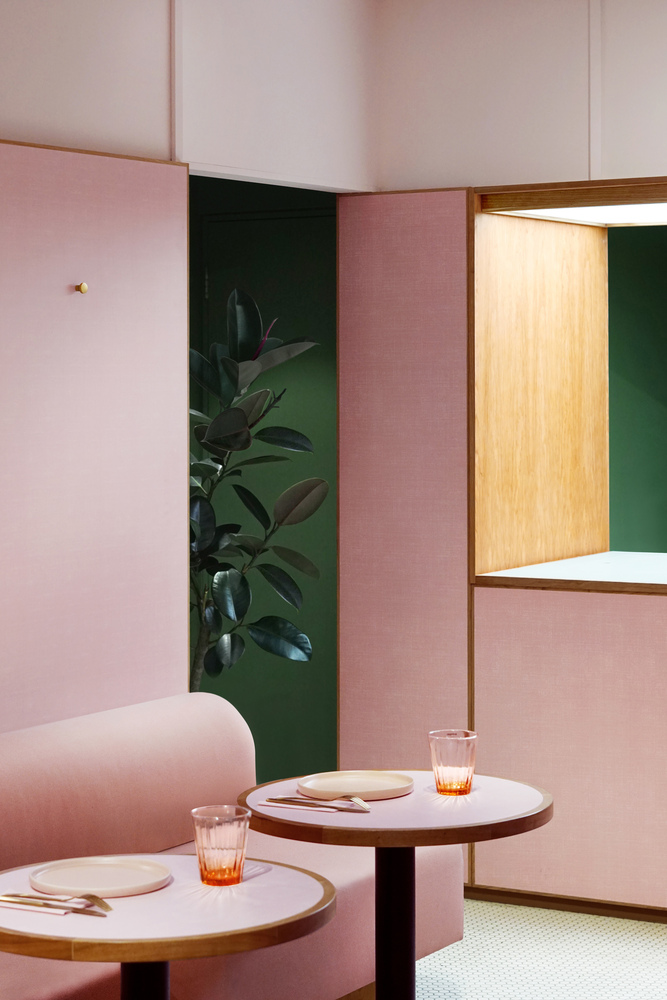 An Illuminated cherry-clad lightbox frames the ‘open kitchen’ counter towards the rear of the space, creating a cinematic focal point whilst offering a glimpse behind the scenes and celebrating the food making process focused on plant-based ingredients.