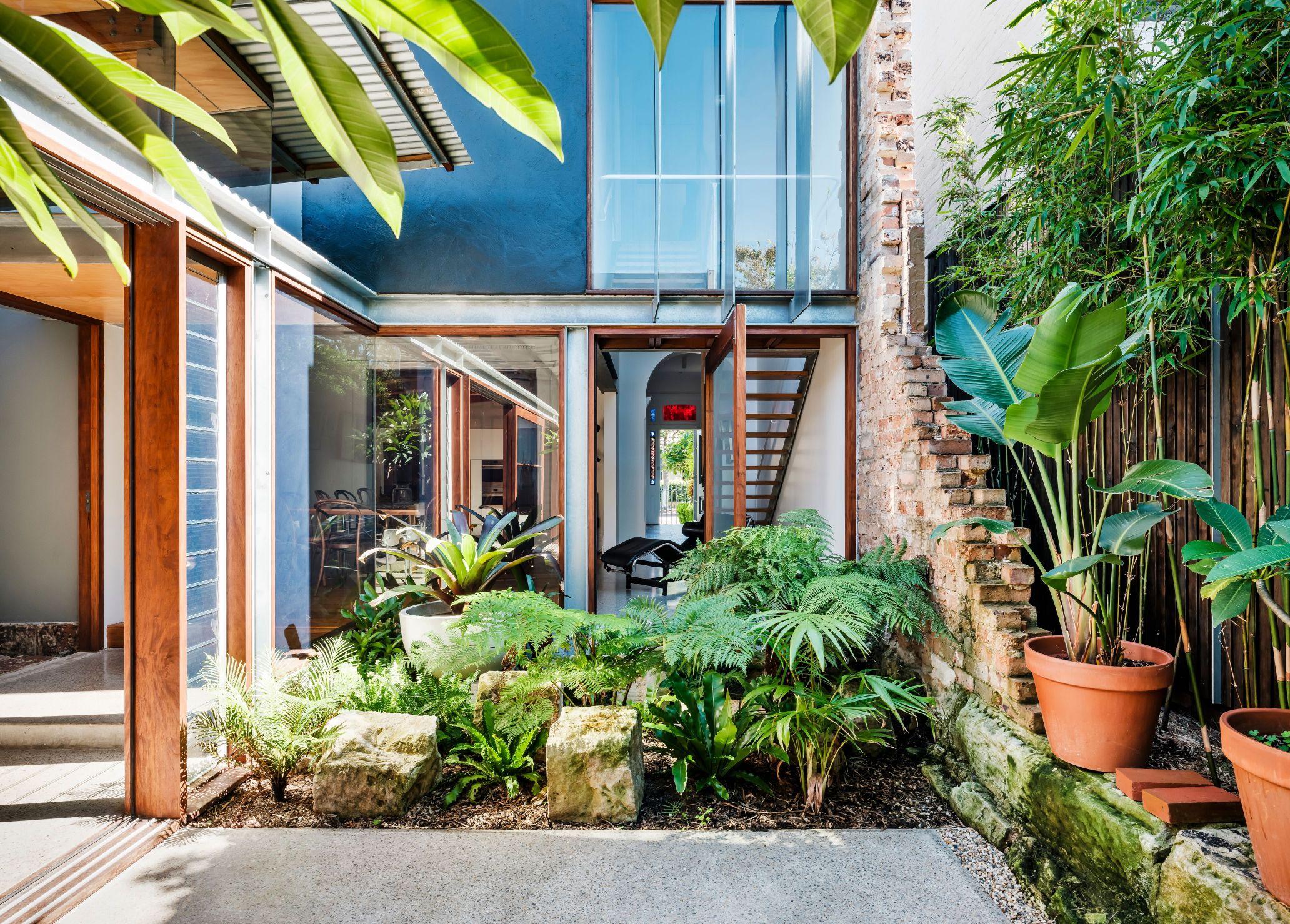 The Sydney design director takes us inside his reconfigured terrace home in Glebe, which references Moroccan riads and the pleasures of a central garden.

From 19th century Italianate terrace to interwar boarding house, Agius’ Courtyard House acknowledges its eventful, but not always glamorous, history by carefully retaining all elements of the original 1885 structure.

In reconfiguring the building back into a single dwelling, the ambition was to create a courtyard house that afforded much better amenity than the typical terrace typology.

The 1885 original front and the contemporary sandstone rear are connected and celebrated through a new cantilevered roof. At its centre is the sunny north-east facing central courtyard.

Filling the interiors with plenty of greenery and light, this courtyard represents the physical and conceptual heart of the dwelling, inspiring Agius and his family to throw open its timber glazed doors and invite the sunlight into every corner of their home.

We catch up with Agius to find out more about the project.

ADR: How long have you lived here and what drew you to the property?

Joe Agius: As it had been configured as a boarding house, we did not live in it until the project was (almost) complete. The period of time from purchase to moving in was three years. We have been in the house now for just over two years.

Having completed a renovation – modest in scale, but big on ambition – some years ago, my wife Kate and I were keen to have another go. We had been looking for an opportunity for some time, one that enabled us to ‘do something different’. The house we bought was built in 1885, a substantial Italianate terrace.

Many larger terraces in this inner Sydney neighbourhood were abandoned, some became slums and some were converted into boarding houses during the interwar Depression period – sometimes quite aggressively and unsympathetically. Such was the case with this house; in the process the rear was demolished and replaced with what one neighbour described as a ‘monstrosity’.

This was the appeal though. The monstrosity gave us a planning envelope in which we could negotiate an outcome different to Heritage and planning codes compliance. Hence, a courtyard typology that broke the planning and Heritage rules was indeed possible.

Local council and the neighbours were all happy as the monstrosity that had blighted the now somewhat gentrified streetscape for 70 years was set to go.

The design was inspired by some of your favourite architects – Louis Kahn, Carlo Scarpa and Tadao Ando. Can you elaborate?

JA: These are architects whose work I have admired over a long period, and that cannot help but inform your own thinking. There are many influences though, including people I have worked with over the years.

Three key inspirations for this house were the riad courtyard typology of North Africa, the Dutch Calvinist approach to engaging the public domain and revealing personal space, and the restraint, severity and economy of much contemporary Japanese residential architecture. We visited Tokyo while in the middle of the design phase. Wandering the back streets of any Tokyo [district], one is bound to find many anonymous but inspiring houses dealing with their constrained sites and small streets in inventive ways.

You retained all elements of the original 1885 structure. Why did you make this decision and did it present any challenges?

JA: On our initial viewing of the house, my first feeling was to ‘save it’. A beautiful 1885 Italianate terrace was hidden somewhere under the 70 years of neglect and aggressive boarding house modification.

The boarding house arrangement meant there were kitchens and bathrooms everywhere and reversing all this was going to be a challenge. Although this was never a Heritage conservation project, in returning the house back to a single dwelling we wanted some of the generosity and elegance of the original 1885 interior spaces to be celebrated again, but allowing the contemporary interventions and the original retained features to sit juxtaposed.

Our mantra through design and construction was to retain the 1885 fabric/remove every element of the 1930s fabric. This is probably most clear in the toothed sandstock brickwork – here we were accurate (to the brick) in removing 1930s brickwork from the original 1885 brick leaving what appears as a ‘ruin’.

The house really has two distinct wings articulated by a tenuous connection – the 1885 original front and the contemporary rear.

All of the features in the 1885 portion of the house that were original were retained – including pressed metal ceilings, cedar architraves and fireplaces. By contrast, all of the 1930s fabric in the house, including bathrooms, kitchens, lighting and face fixed conduit, was removed.

The profile of the original rear of the 1885 house (which was demolished in the 1930s, we discovered) we articulated in the façade as a black silhouette, referencing the house’s original form. In a sense [this is] a public art historic interpretation piece, viewable from the courtyard and the side street.

Can you talk about the courtyard? It’s the heart of the building, is that right?

JA: I had always been interested in the courtyard house typology, having experienced it on trips through Europe, North Africa and China. The idea of a central space that was the heart of a dwelling had strong appeal. It is a dwelling type with a lineage to Roman architecture and very much cross cultural. This is not, however, a Sydney typology, so the opportunity to do this – particularly in an inner urban Heritage suburb – was remote.

Having commenced with a commitment to the courtyard idea, we had to then refine it and, of course, study the many plan configurations possible around it. We looked to the traditional riad courtyard houses of Morocco – houses with lush, green, open and shady courtyards with a strong sense of interiority, coupled with severe exteriors to street. This spoke of a possible contemporary approach.

All the living areas, including an open galley kitchen, are on the ground floor and seamlessly open to one another. The garage is also directly connected to the courtyard via a glazed opening. It is a multifunction play space and music room, as well as store for bicycles etc. The garage and courtyard can be also configured as a contiguous inside/outside space for large gatherings.

Somewhat contradictory to the interiority of the courtyard, we are able to open the entire living area direct to the sidewalk – in the best Calvinist Dutch tradition of opening one’s private home interior (including the courtyard) to the public gaze.

JA: My favourite location at the moment is relaxing on the banquette in the living room space – with the sliding panel to the street open. From here one can survey the entire ground level and courtyard of the house, while easily engaging with the street outside.

Which is your favourite piece of furniture and why?

JA: The dining table I made in 1995 when Kate and I started living together in an Elizabeth Bay apartment. It has been with us through three homes and has a layer of patina developed over 25 years. Indeed most of our furniture is quite old – either good investments in our early days together or inherited. I’m of the view that furniture should really be quality one-off purchases – and last a lifetime.

Did being a designer make it difficult to settle on a design for your own home? Are you a good client?

JA: Glenn Murcutt once said never design your own house – best to design a house for someone else, then buy it. He said if you design your own house you will want to put every idea into it. I think this is the dilemma and challenge in designing your own house as an architect – being clear and focused on the concept and ambition, and disciplined enough not to stray.

In developing the ideas, it raised broader questions of values and caused much self-reflection – how do we live? How should we live? What is important to us? And what is not important? How can a house engage with and contribute to the public life of the street? We spent a year developing the brief and thinking before we really committed. All of this involved many discussions and sketches between Kate and me before we settled.

This article original appeared in inside magazine, which is on newsstands and available online now!

Earlier in the year, we visited studiofour director Sarah Henry’s Melbourne home, which is designed not only as a haven for her young family, but also as an exploration of how to live with deliberation and humility.

At home with Moby Architecture and Interiors director Richard Teed