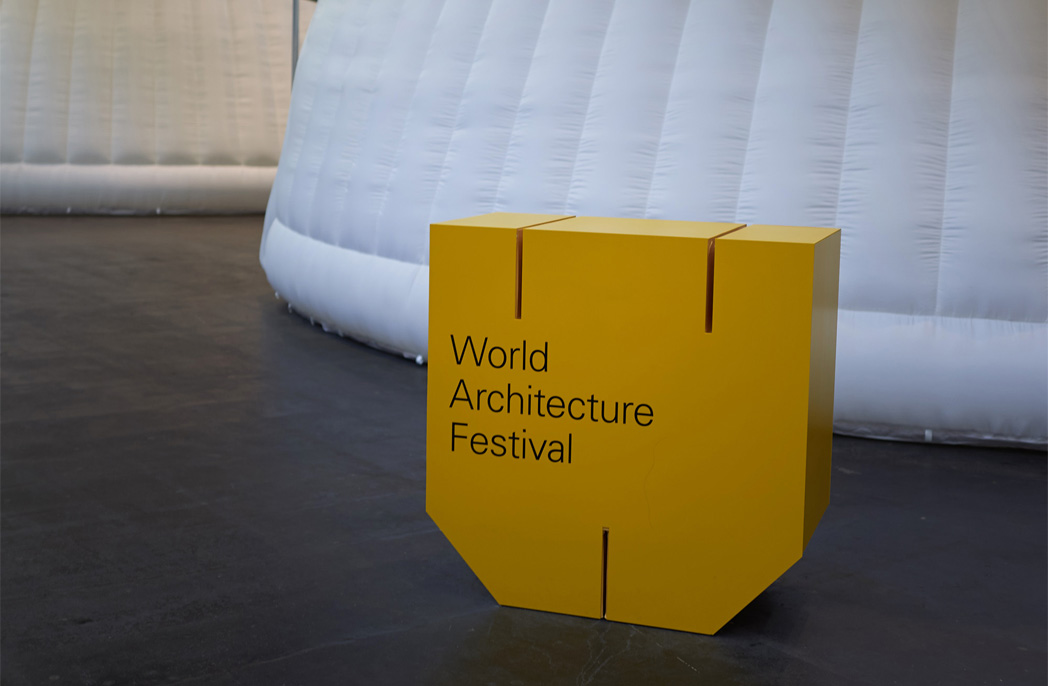 All photography and text by Peter Bennetts.

A few weeks ago, I attended the Ninth Annual World Architecture Festival (and INSIDE festival). For the first time, the festival was held in Berlin, accommodated in the Berlin Arena, an industrial building on the River Spree built in 1927 as a bus depot and co-opted by the GDR during the Cold War as part of the Berlin Wall. A remnant concrete guard tower stands sentry in an adjacent park – formerly the ‘no-man’s land’ between the twin barriers that made up the wall – perhaps keeping watch for subversive architecture!

Unlike WAF’s past – the first three at Barcelona’s CCIB and the next three at Singapore’s Marina Bay Sands – there’s no wondering where you are, this venue is refreshingly real. Memories of the Cold War are easily identified. Around the Arena, sections of the wall appear enmeshed into waterfront cafés and beer gardens. The gothic, brick Oberbaum Bridge, with a new Santiago Calatrava steel mid-section, the East Side Gallery and what was Checkpoint Charlie isn’t far away, reminding us that the built environment can be manipulated for the absolute control of humanity.

Inside the Arena, the setup is less festival and more trade show with stands featuring tap fittings, glazing systems and thinly spread architectural publishers. Inflatable igloos serve as crit rooms. The plenary hall is an inflatable castle. Real igloos have great acoustic separation and don’t rely on compressors to stay up. Presentations to the juries are overhead from one inflatable pool toy to another, over the constant drone of compressors. 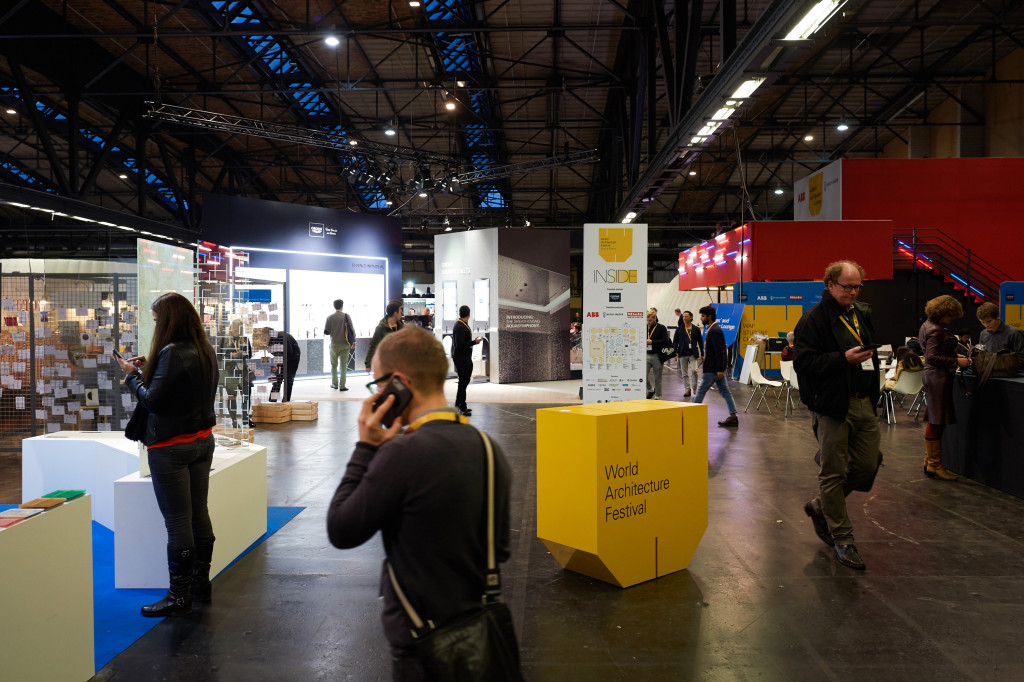 WAF is nominally a juried architectural competition with a parallel seminar program and a series of keynote addresses but at its essence, it is an opportunity for architects to come together from around the world to meet and learn from each other. That’s a good thing!

WAF presents an unprecedented opportunity to view the greatest selection of the year’s architecture in a glance, and in an exotic neighbourhood if you happen to be from Australia.

Online entries are shortlisted, and you’re then invited to pay to attend and present to the category juries. Delegates would be right to think that €1,250 for the cheapest ticket is a lot to pay to attend… in 2010 it was €695.

Entries come from the world over. I’d say from our region, entries were a bit down on previous years when Singapore hosted the event. UK entries are high but that’s understandable considering the ownership of the event by British publisher emap who counts the Architecture Review among its mastheads – heck, someone has to organise it. Entries from the USA are always thin at the WAF and the USA now has its own competing American Architecture Prize. Like the Brazil Olympics, Australia didn’t fare as well as it usually does in the medal tally – no Building of the Year (FJMT’s Auckland Art Gallery Toi o Tāmaki in 2014) or Interior of the Year (March Studio’s Hotel Hotel in 2015) but Australian architects did put on a great show.

The beautifully monastic Indigo Slam did have a well-deserved win in the INSIDE interiors program ‘House’ category, edging out works that included Iredale Pedersen Hook Architects with Caroline Di Costa Architect and Ian Moore Architects. The eventual winner of the World Interior of the Year 2016 was the Black Cant System, Shanghai by An Design Studio. A grey-like-Berlin-winter-skies retail store of brutalist concrete, black steel and dark timber – what’s not to like! 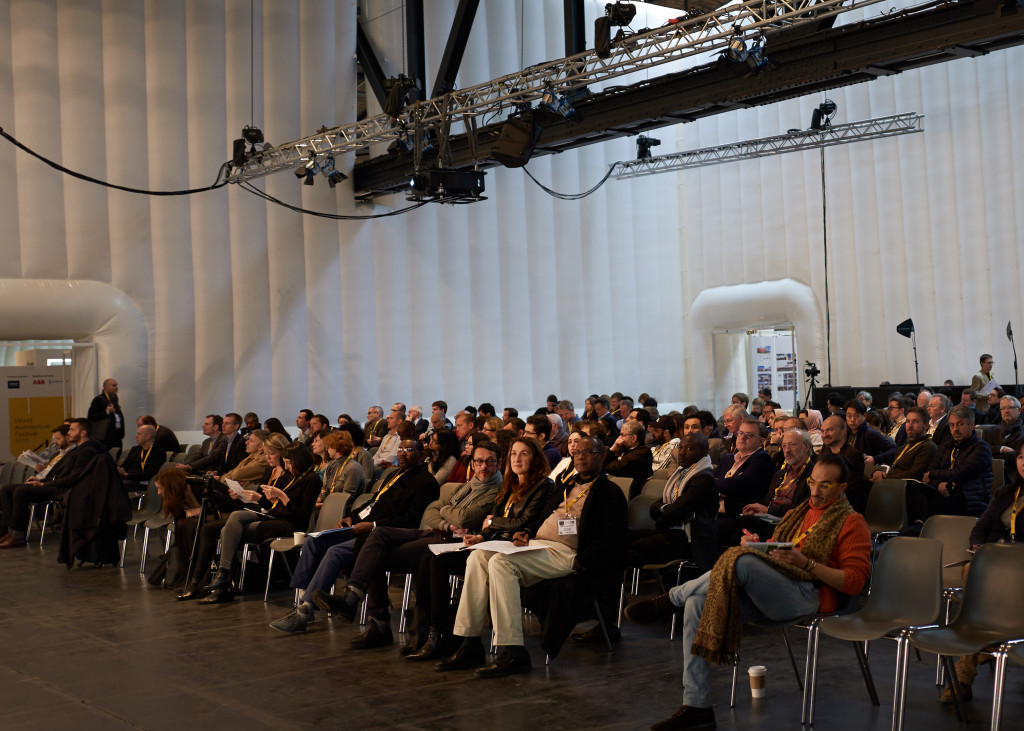 The top prize for unrealised projects – ‘Future Project of the Year’ – was won by Hayball for South Melbourne Primary School. The school promises to be an exemplar vertical school in the former industrial precinct of Fishermans Bend. Not far from home for me; I’m looking forward to seeing the school built.

Pipping The Waterfront Pavilion by Francis-Jones Morehen Thorp (winner of the ‘Display’ category) and taking the World Building of the Year was the poetic National Museum in Szczecin (Chechin) by Robert Konieczny, KWC Romes. This worthy winner had won the Culture category to progress to the final. Comprising an undulating public square with the museum below ground, it successfully challenges notions of what constitutes public space and building. Definitely one to visit! 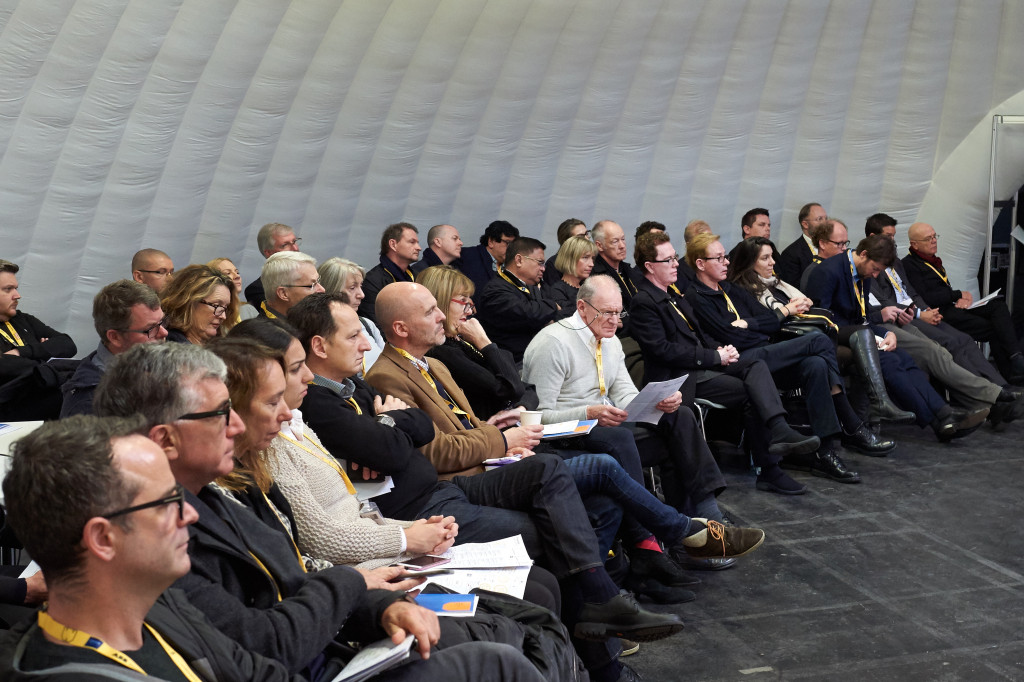 Meanwhile, in the INSIDE festival igloos… Woods Bagot was awarded a category prize in ‘Offices’ for Paramount by the Office Space in Sydney, beating a diverse group of 15 contenders from all around the world, including efforts from fellow Australians BVN and Woods Bagot’s own Melbourne Studio. Bates Smart and HASSELL fielded fine projects in ‘Hotel’ with the Canberra Airport hotel and Ovolo Woolloomooloo Hotel respectively.

Australians did their WAF jury duty in the igloos with Martyn Hook, Michael Hennan, Cameron Bruhn and honorary Australian Chris Bosse all taking part in the deliberations, while HASSELL’s Robert Backhouse and Nik Karalis of Woods Bagot did their part in the INSIDE igloos.

Elsewhere in Berlin, outgoing POTUS Barack Obama was saying his goodbyes. From my accommodation in central Mitte – just opposite the Brandenburg Gates and behind the Memorial to the Murdered Jews of Europe – the security for the President featured heavily, with pleasantries such as rooftop snipers, machine-gun emplacements and the armoured personnel carriers that denied access to many Berlin attractions. For days the Reichstag, the Unter den Linden, Berlin’s main drag, and most of Mitte was closed off and deserted except for heavily armed police. As I was wondering how the hell I was going to get to the temple of modernism, Mies van der Rohe’s Neue Nationalgalerie, Barry came out of the Adlon, got into Cadillac One and drove past me as I stood on the street corner with bemused Berliners and a couple of tourists. Under heavy skies, it was terribly sad; I’m not looking forward to the new guy.

Back at the WAF, in the inflatable castle, the late great Zaha Hadid’s ‘Potato’* Patrik Schumacher was giving a keynote. Boasting of his practice’s ability to leverage design to maximise profit with example apartments in developments costing between $4.9 to 50 million USD. Schumacher, clearly frustrated with the state of bureaucratic regulations, mapped out a solution to London’s housing crisis that included getting rid of all building and planning regulations, privatising all streets, squares, public spaces, parks and scrapping social housing. Upon suggesting that Hyde Park could even be replaced with a new city developed by market forces, some delegates had had enough and walked out. Upon Schumacher’s conclusion, there was booing. While it’s impossible to agree with most of what Schumacher said, I certainly enjoyed the provocation. 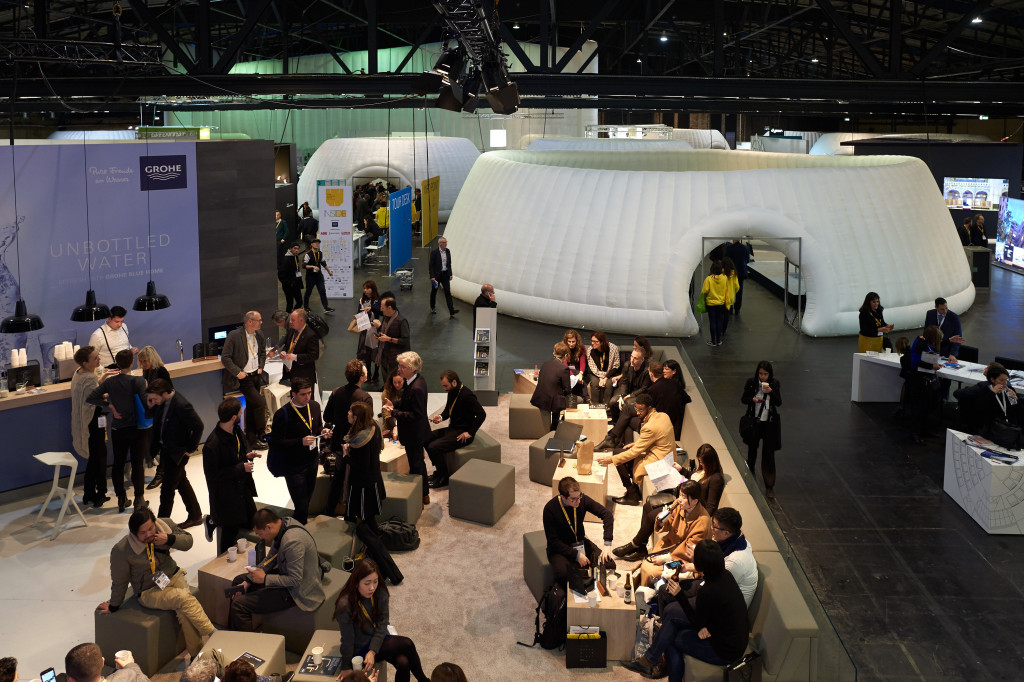 This year’s WAF was a great excuse to visit Berlin and memorable in its timing as the USA ushers out Obama and prepares to anoint a lousy developer as his successor. We can only hope that Trump makes a better president than casino operator but I doubt it. Perhaps Patrik Schumacher can help!!! 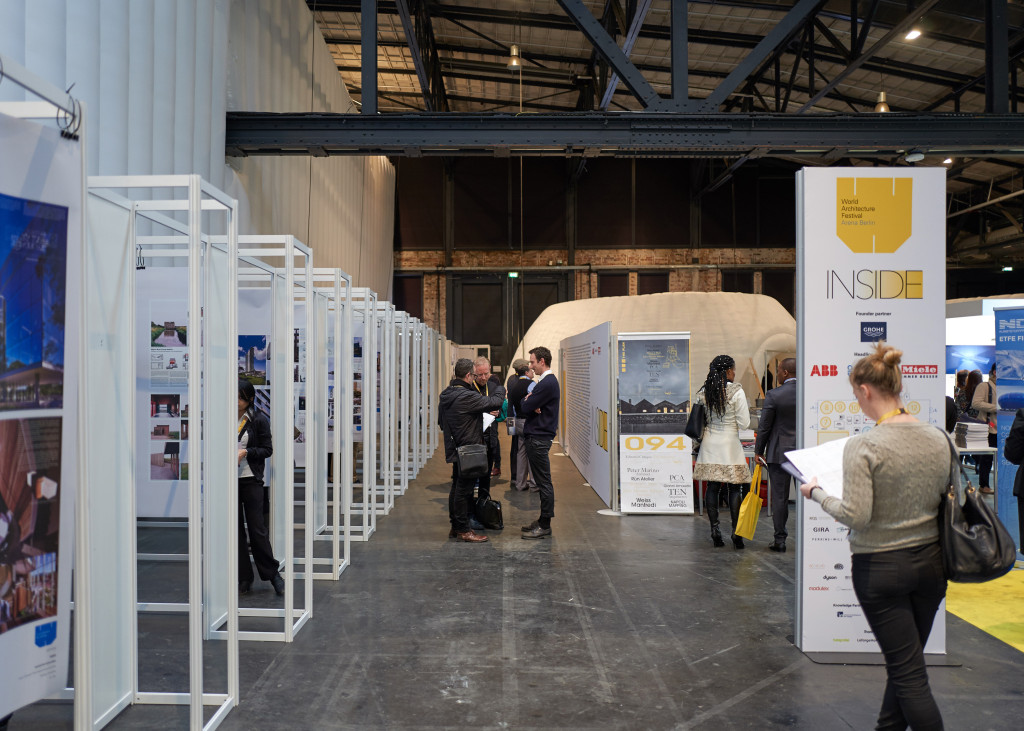