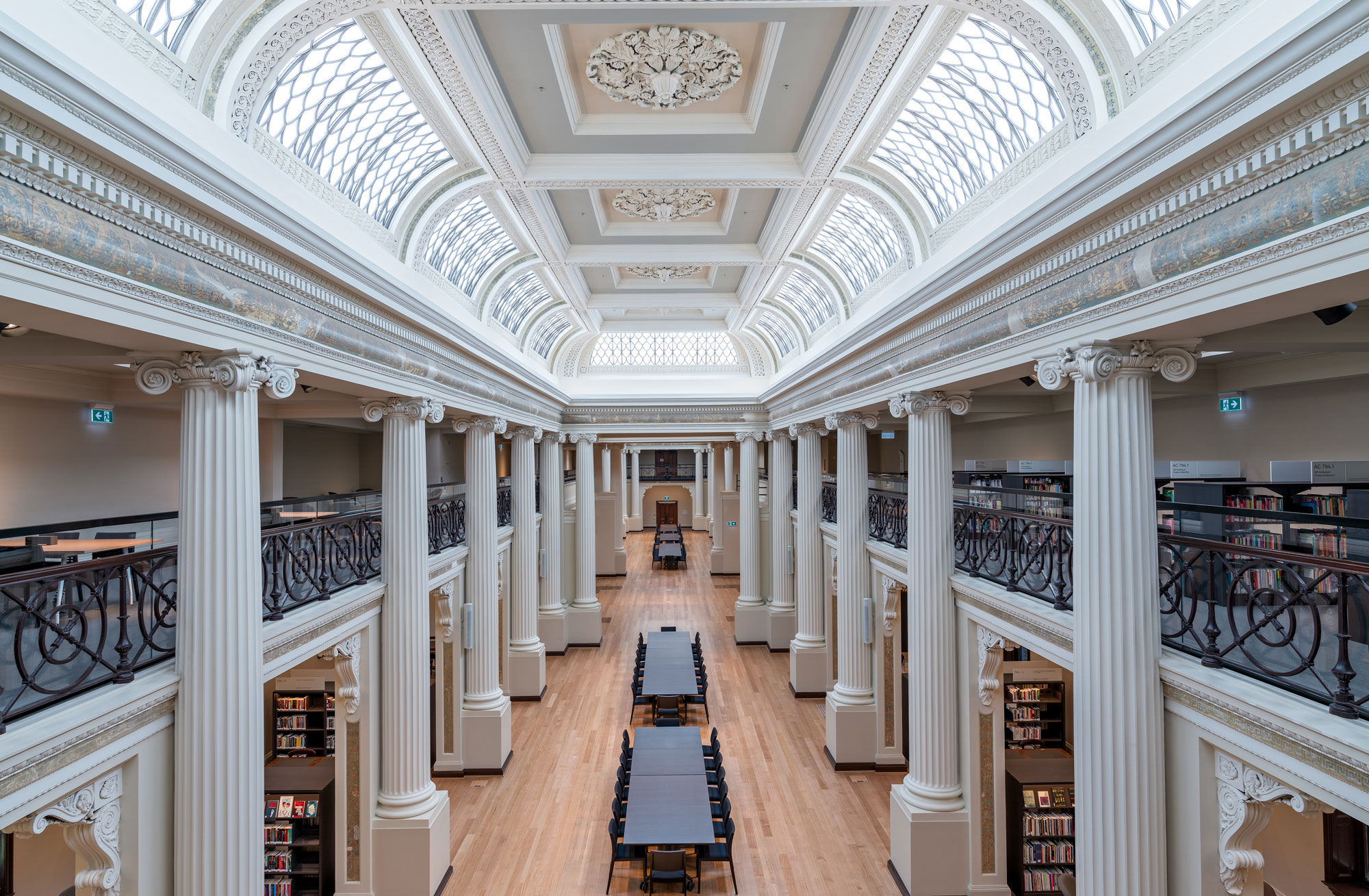 Victoria’s State Library reopens, and it’s a study in restoration over replication

The $88.1 million renovation of the Victorian State Library by Architectus and Danish practice Schmidt Hammer Lassen has officially opened to the public.

The five-year redevelopment plan focused on the Victoria Gallery, The Ian Potter Queen’s Hall, the Russell Street entrance, the Isabella Fraser Room and the Quad, which connects all four of the library’s new activity courtyards.

The project set out to increase public space by 40 percent and seating by 70 percent in what is the fourth-most visited library in the world, but it was also a restoration job that sought to reveal the original grandeur of the 160-year-old building.

Schmidt Hammer and Lassen partner Elif Tinaztepe says the goal was to make subtle, delicate changes that celebrated the historical bones of the library and respected the users’ needs.

“When you’re designing a library, you want people to feel ownership of the space. It belongs to them.

“The history of the State Library was always here, we were just returning it to the people.”

Schmidt Hammer and Lassen is part of the global architecture and design firm Perkins and Wills, making a name for itself in the design of cultural and educational buildings. It’s particularly known for its library design with a portfolio that boasts more than 15 libraries including the Christchurch Central Library, Shanghai Children’s Library and The Royal Library in Denmark.

Tinaztepe says the practice applied this international experience to its design for Melbourne, but was also influenced by the city’s own cultural heritage.

“Every library design is different, it presents its own challenges and plenty of surprises. With the State Library, there were a lot of good surprises. We discovered some of the original flooring, for example. It was in such good condition that we had to incorporate it into the final design. That was a pleasant surprise. Part of the journey with this redevelopment was exploring and uncovering treasures like that.

The highlight of the new library is The Ian Potter Queen’s Hall. After a 16-year closure, the original reading room is one of Melbourne’s most breathtaking spaces.

The 1019-square-metre space featuring 19th-century design, high ceilings and timber flooring has been restored without dampening the raw beauty and authenticity of the hall’s original design.

She mentions the paint scheme as an example. Layers of paint have been scraped back in selected sections around the hall to reveal the original decorative scheme by Edward La Trobe Bateman in 1859.

Based on colourful stenciled patterns used in ancient Greece, the decorative paint work depicts the floral and leaf forms, but can look unfinished in places.

“Even before we were awarded the project, we found a piece of wall that had been stripped back to discover the original paint scheme. When I looked at that, I just thought, it’s so powerful. You feel how old it is.

“I think in Melbourne we’ve had quite a tradition of replicating the decorative paint schemes and while they’re beautiful, we don’t get the sense that they are old. We really wanted people to be able to feel the age of some aspects of the building.”

Wilson says it took Heritage Victoria a while to come around to the idea of preserving the paint scheme.

“It was an unexpected choice, but it was great to have the library’s backing on it. They very courageously embraced the idea, but there were times when had some doubt.”

The decision not to cover the original paint scheme corresponded with the design team’s desire to celebrate, not replicate, the library’s heritage elements.

Any modern additions to the hall are deliberately black, from the table to the staircase, the lighting and the balustrade. That’s so visitors can immediately distinguish them from the original elements.

Elements like the 60 Australian red cedar chairs and 11 tables that were originally found in the hall. They’ve been restored along with the skylights, which were covered in the 1970s to prevent rain damage.

Builders installed a clear Danpalon-clad roof over the top of the skylights. The space in between contains the air handling system, feeding the air through the skylights with a German system that removes the need for visible ductwork.

“We knew that we were ensuring the library’s 21st century performance with aspects like the heating and cooling, but at the same time, we wanted to preserve the feeling that you were standing in something very old.”

Elsewhere in the State Library, other heritage features have been brought to the fore. The 1920s murals above the marble staircase and in the entrance-way to the The Ian Potter Queen’s Hall have been restored.

The staircase, which was deemed unsafe, has been preserved underneath a new modern piece, which Wilson describes as an “old and new collision”.

“With two million people coming through the door, we couldn’t keep the original marble treds, which had been worn away. We laid a new staircase over the top, so we could still preserve the heritage staircase while also being up to code.”

On the ground floor, the new Hansen Hall is filled with natural light, welcoming visitors with a handful of collaborative spaces before branching off into the four new quarters.

The Conversation Quarter is designed for lectures, conferences and workshop, and marries three centuries of architecture – the original bluestone walls, the Edwardian arched windows and the ’80s spaceframe roof that some designers wanted to cover, but Wilson says needed to be embraced and celebrated.

The Create Quarter features access to recording suites. While the Ideas Quarter, which is set to open next year, is a dedicated co-working space that will be home to a member-based service for new businesses.

But perhaps the most popular quarter and a favourite of Wilson’s is the Children’s Quarter.

It features a two-level storybook castle, a tactile, sensory landscape for younger children, easy-to-access family rooms and a running track around the perimeter to tire out the library’s most energetic visitors.

“It was a true process of co-design. We spoke to parents and the children to get their wish list for the space. The two-storey structure itself evokes the sense of a castle or perhaps an eco-spaceship or a treehouse can be many things.”

This process of consultation was also applied to the library’s other spaces and users.

“We know a lot of people studying in Melbourne live in very tiny apartments and that the library is their living room in many ways. A place where they can come to socialise. Many of these students live on very tight budgets, so to be able to come to a place that is free and welcoming is really special,” says Wilson.

As for expectations. With such a visible project, the design team did hesitate over some of decisions, but trusted in their minimalist approach and focus on restoring rather than replacing.

“Sometimes we imagined people coming in and saying, ‘Well, what did they do?’ And that made us very happy,” says Wilson.

“There were times when we were worried, but I believe if you’ve got a strong strategy and you stick to it, the story stays true.”

On the contrary, I don’t feel the building’s age at all anymore. Great intentions but the result feels bland and lifeless. I felt sad to see it. Atmosphere is important in architecture I think. Still, others might do better in another 100 years.