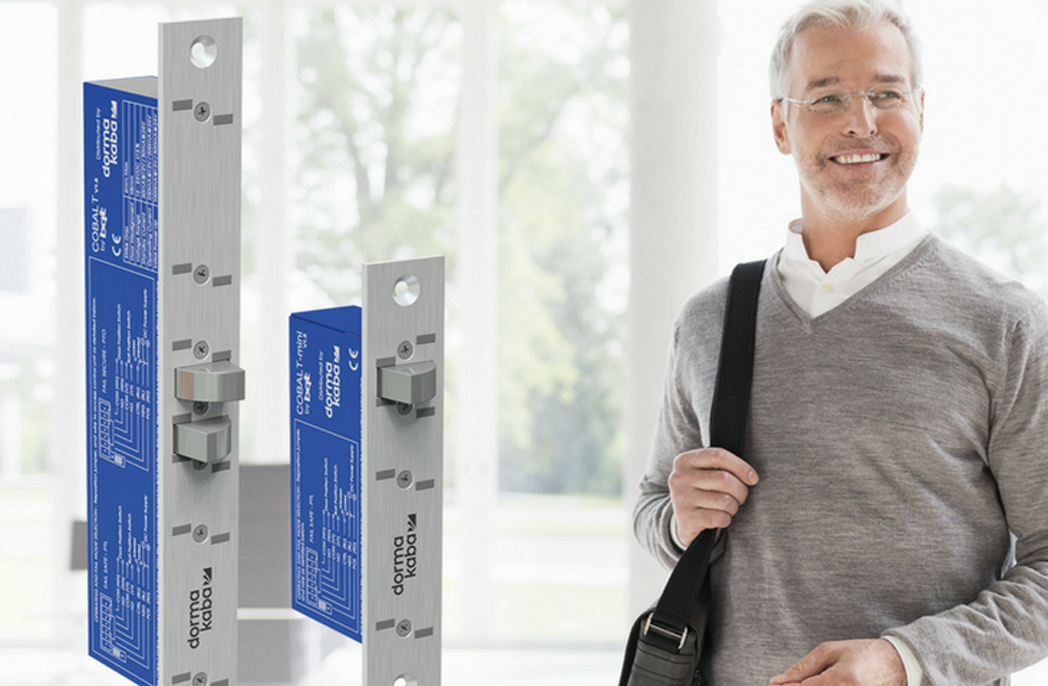 The latest in electromechanical locking solutions

To make sure your doors close firmly, open easily even with unexpected pressure loads and have a minimal noise impact, look at specifying the cobalt side load locks, writes Angus Richardson.

There are various different technologies available that come under this heading, but the most effective are those that can address a range of common issues including the two major ones: door misalignment and side load pressure. The latter is caused by a variety of issues.

The most common are incorrect installation and excessive wear or due to the introduction and greater use of what are known as door seals. These take the form of a rubber seal that goes around the door, but when they’re not carefully applied they can potentially prevent the latch from closing. The outcome of this is that someone opens the door, allowing the normal door controller to close the door behind them. But if it doesn’t perfectly latch, and is left essentially swinging in the breeze, a person following closely behind or ‘tailgating’ will be able to simply pull the door and it will open – leaving supposedly secure areas open and vulnerable.

The latest ground-breaking technology in this area, however, can more fully address both issues of door misalignment and side load pressure, resulting in greater security and more reliable access. Cobalt side load locks have been engineered with these concerns in mind. They are motor driven electronic locks designed to secure commercial and residential double- action doors.

They boast the ability to unlock a door with a significant side load force (powered and unpowered). If someone is pushing or holding a door, or perhaps had an accident and fallen down behind a door, there is going to be pressure on it, but a cobalt side lock will release up to 100 kilograms of pressure. This means the door can be released when requested, even with such an excessive load on it. And in cases of misalignment, these locks also have the ability to pull a door back to its central position by up to eight millimetres in each direction.

The cobalt has been described as the most revolutionary electro- mechanical product currently on the market. What makes it unique is that it militates against that inconvenience a user experiences when they, say, swipe their card and the door doesn’t open because it has pressure behind it. It also prevents people from being able to just walk through because the door hasn’t latched properly. This translates into greater security, as it’s a more positive locking function.

Another great advantage of this particular technology is its minimal noise impact. Apart from its opening feature – which is the click of the bolt retracting – there is no loud metallic noise where the mechanism comes into contact with a big plate as in other electro- mechanical locks. Instead, in the unlocked state, the plates are flush, so there’s no friction. When the product is open, there is no contact between the strike plates, so any noise is at an absolute minimum. And, being motor driven, it’s much quieter than the traditional solenoid.

To sum up, the features of a cobalt electronic side load lock include:

■ door misalignment of up to eight millimetres (8mm) is corrected

■ side load release of up to 100 kilograms

■ mortice mount horizontally or vertically, on single-acting doors, and

■ surface mount with the aid of the SL30DBL accessories, including mounting onto glass.

When cost is a concern

If a greater consideration is the economics of the specification, drop bolts are a reliable alternative to the cobalt side load lock. The latest drop bolts provide unique optional magnetic latching options to minimise misalignment issues inherent with drop bolt locks. There are magnetic latching versions used for regular applications (up to 1000 kilograms holding force) as well as for heavy duty applications (up to 2000 kilograms of holding force). There are also related accessories available, including surface fix mounting boxes and dress plates suitable for frameless glass doors and timber or metal constructed doors.

The difference between the drop bolts and the cobalt locks is that the former do not have the ability to release under side load pressure or preload. They are not a new product, having been in the market for some time, but were reliably used until the introduction of the cobalt locks and are still a sensible choice. The standout feature of this technology is the magnetic latch, which holds the door in alignment, so that the door meshes with the frame.

Angus Richardson is the product manager DHW and DDL | Pacific at dormakaba.