Home • Architecture • Not the last straw 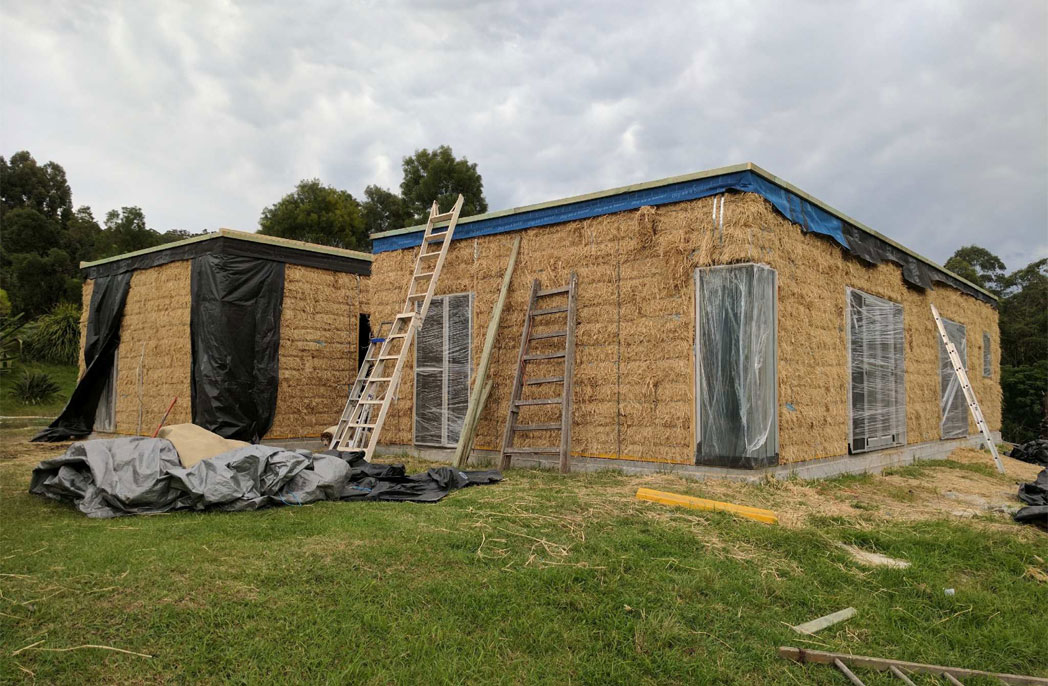 Not the last straw

You can huff and puff all you like, but Frank Thomas is building houses that you can’t blow down.

Remember the story of the three little pigs? It turns out they got it wrong. The house of straw may actually be the best choice after all. Australian straw-bale construction and education company Strawtec has been building homes for 20 years using structures made of straw, and founder Frank Thomas is passionate about the health and environmental benefits of this type of construction.

Originally from Germany, Thomas moved to Australia in the early 1990s and, following an interest in alternative building techniques, he became involved in constructing straw-bale homes. Straw-bale construction involves a building method using bales of straw (typically wheat, rice, oat, barley and rye straw) as the structural and/or insulation elements of a building. It consists of stacking rows of straw bales on a raised foundation, with a moisture barrier or capillary break between the bales and their supporting platform. Bales can be tied together with pins of bamboo or wood, or with surface wire meshes, and then stuccoed or plastered with a lime or clay-based render.

Thomas says that, while straw-bale construction may look easy, it is actually quite labour intensive. “It’s not just stacking up some bales,” he says. “There are three fundamental different ways to build.” 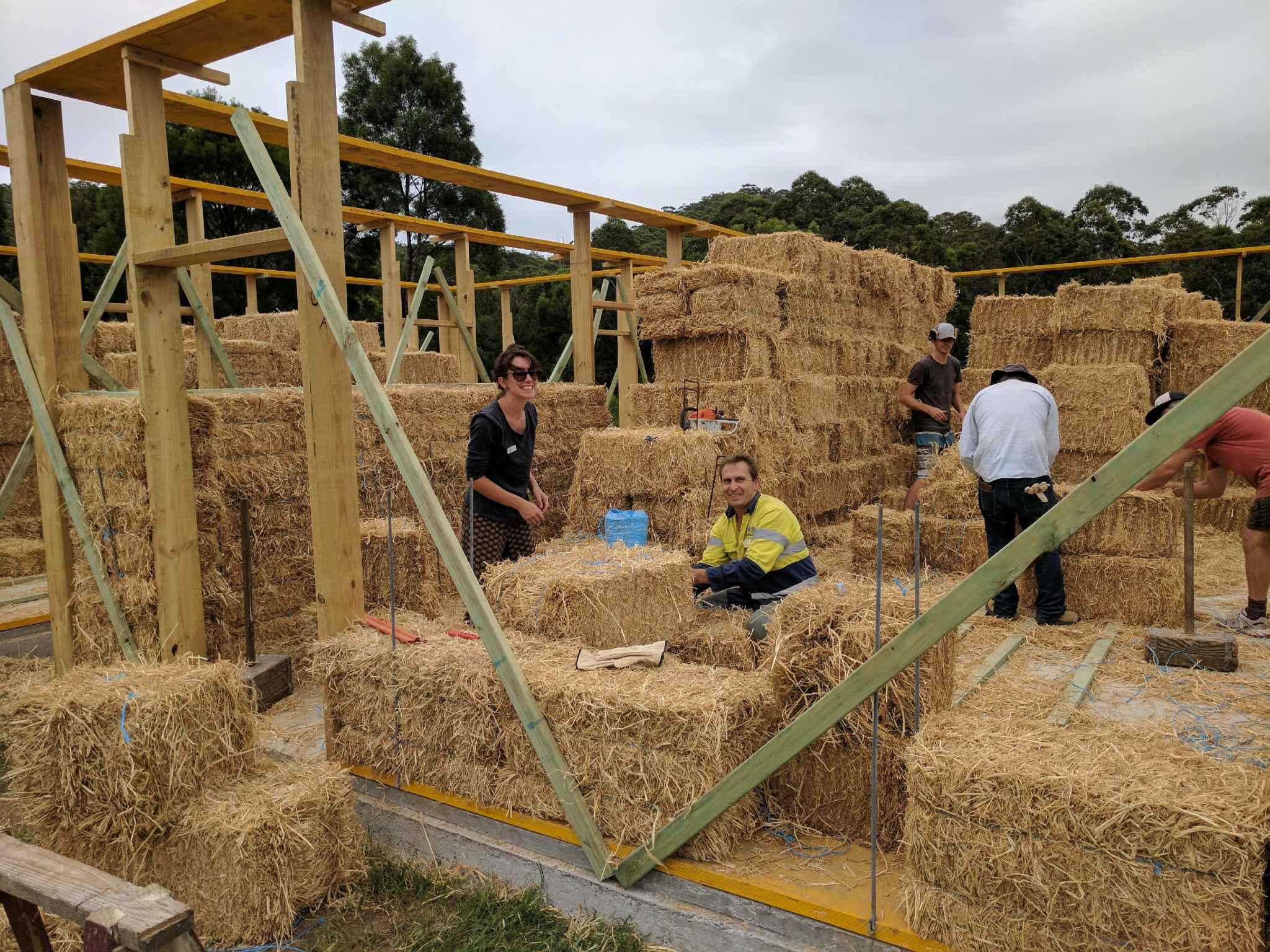 THREE LITTLE METHODS
The first and most inexpensive method is the load-bearing technique. This relatively simple method involves stacking the straw bales correctly and interlocking them to stabilise the structure, allowing the bales to support the roof load.

Thomas says that the load-bearing technique is cheap, quick and very easily adoptable for owner-builders and the like. “The negative side of this is you are limited on design,” he points out. Because the bales need to carry the weight of the ceiling and roof, load-bearing structures cannot have large windows or open sides to let in the sun. “You have to build it in a way that has smaller openings, to accommodate all the weight that the straw bales need to hold the roof and the ceiling up,” Thomas says. 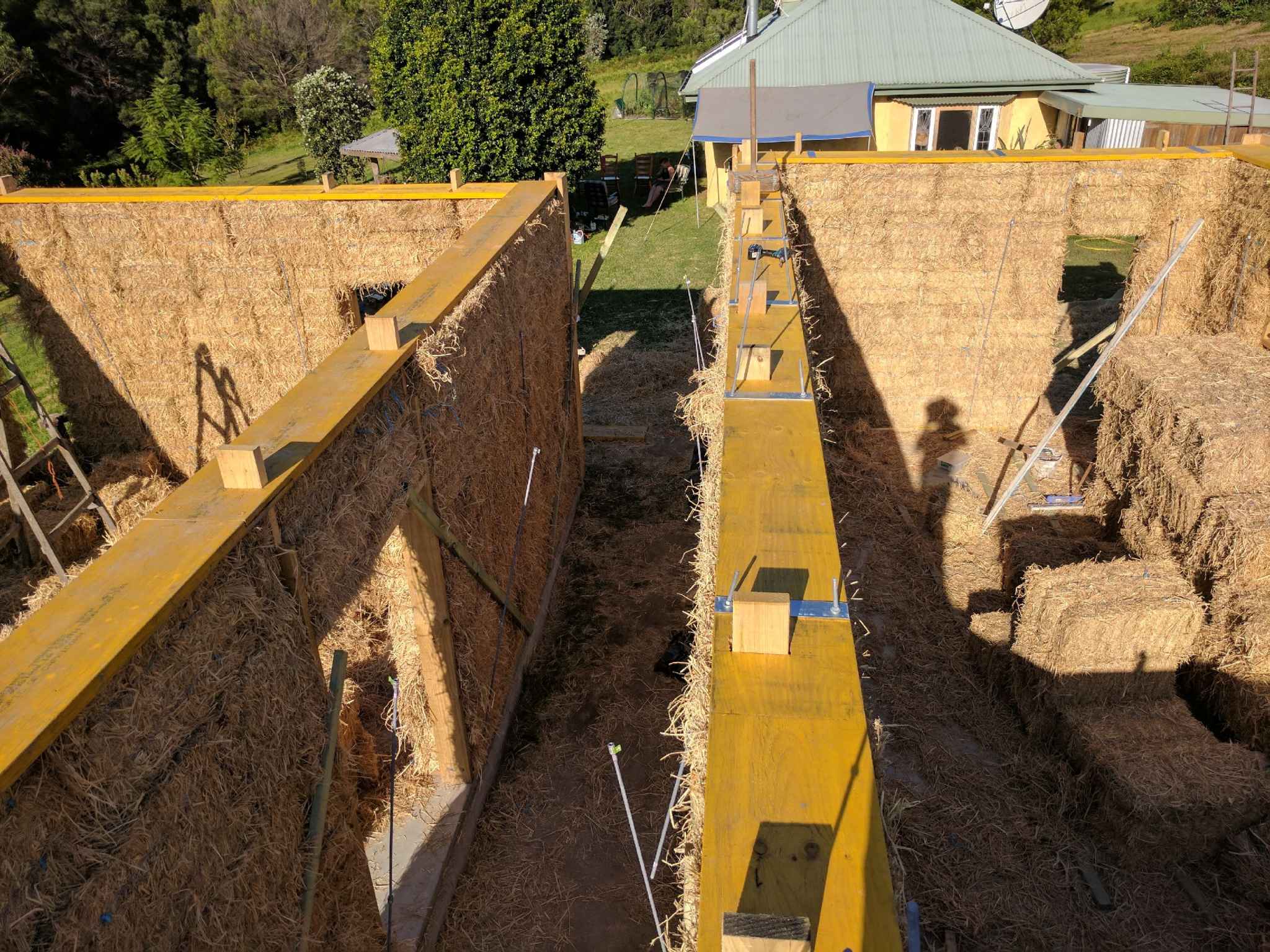 In terms of construction, the middle ground falls to the hybrid system, which combines elements of both load-bearing and post-and-beam techniques. This involves using a wooden frame, giving the structure a rigidity and strength that load bearing constructions lack. Incorporating these additional supports permits hybrid constructions to have wider openings, bigger doors and expansive windows, and thus allows for a more versatile design.

The final construction technique is the post-and-beam system. Here, the building adopts a frame that can be made from an array of materials – wood, steel etc – which takes on the dead load (the structure’s own weight) and the live load (outside or unstable loads, such as weight due to weather). The straw bales are fitted in between the frame, where they need only to support their own weight. This allows for much more flexibility and fewer limitations in the design of the building. With post-and beam construction, Thomas says, “the design options are endless – the posts and beams hold everything up and so you have all the design options open to you, whatever you desire.”

Perhaps what excites Thomas the most about straw-bale houses are the substantial health and environmental benefits. 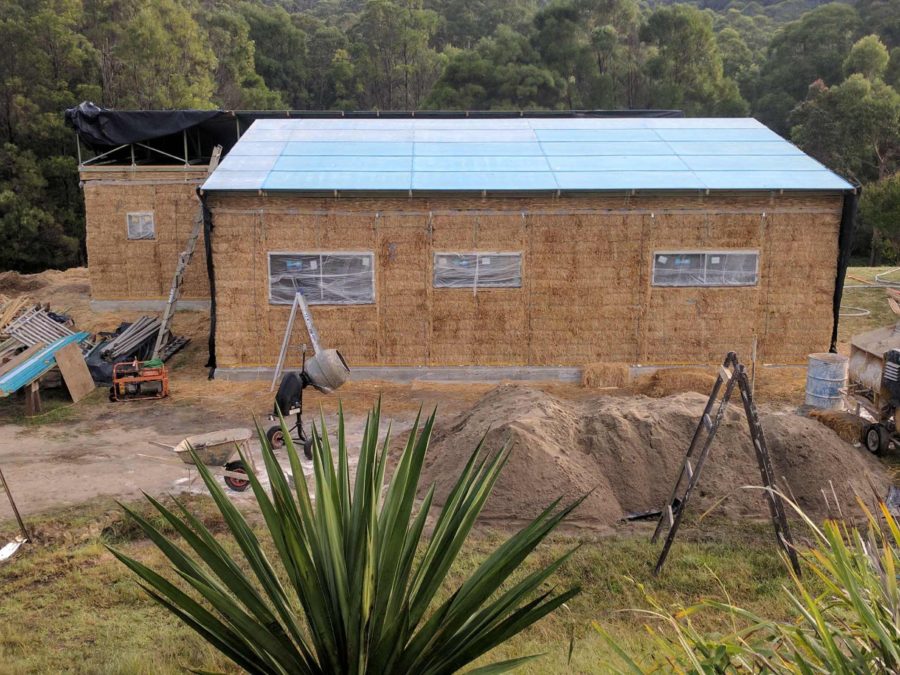 AUSTRALIAN CLIMATE
He believes that, historically, Australia adopted a building method unsuited to its climate. Some designs, particularly brick veneer, mean that in our environment, condensation and moisture build up within wall cavities and result in what is now known as ‘sick building syndrome’ (SBS). Realising this chronic flaw in building standards, Thomas asked himself, ‘What can I offer Australia to give it an increased energy efficiency and give it, from a building biology point of view, a better living standard – a healthier living standard?’ Straw-bale construction makes for a more airtight design and reduced moisture content, which in turn provides better indoor air quality and for a healthier lifestyle. Straw-bale walls have excellent breathability, allowing air to slowly permeate the building without moisture penetration. Additionally, straw bales bestow efficient thermal insulation against the heat in summer and the cold in winter, as well as providing natural sound insulation. 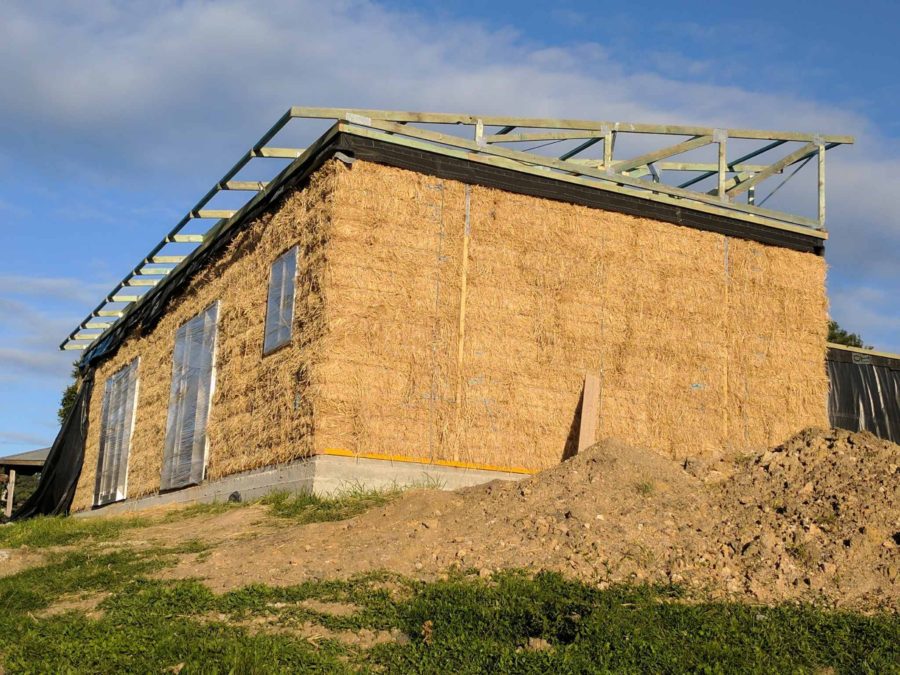 In terms of our environment, straw is a sustainable choice for building construction, as it is essentially a waste product, and grows in abundance in Australia. Unlike hay, it is unable to be used for livestock feed and much of it is burned at the end of the growing season, which emits more ash and carbon dioxide into the environment. Using the straw-bale construction method actually reduces air pollution as straw stores carbon, thus not only utilising a waste product, but also reducing the carbon footprint. Additionally, using a clay render on straw bale buildings heightens energy efficiency, absorbing heat and moisture and stabilising thermal levels. This in turn requires less energy to heat and cool the house, lowering energy costs to the owner and emissions into the environment. 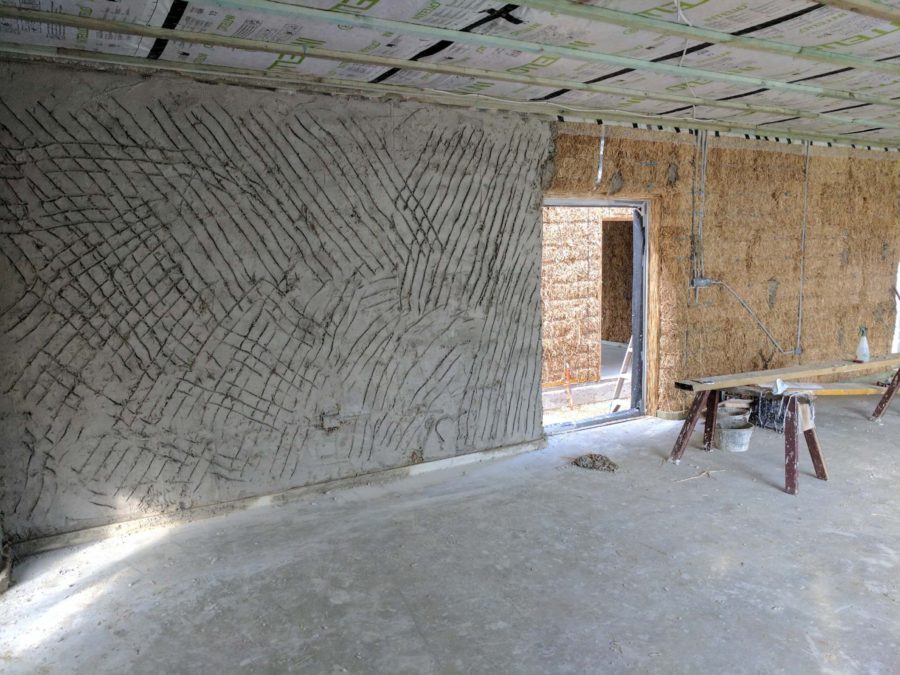 FIRE RETARDANT?
While fire safety is not necessarily the first thing that comes to mind when we think about straw, straw-bale constructions are actually rather fire resistant. Straw bales are tightly packed and covered in a render, and the dense walls provide an airless environment. Fire cannot burn without oxygen and the airtight nature of the straw-bale construction means that the potential for fire to take hold and burn is minimised. Thomas is enthusiastic about straw-bale construction and it is a building method he hopes will become increasingly popular in the years to come. He says, “I love the satisfaction of creating something that is unique… We want to build better, healthier homes.” He is a firm believer in the importance of all factions of society – builders, owners, government bodies – collaborating and working together for a better, healthier, greener and more sustainable future for homes and for the building industry in Australia. Strawtec hosts workshops for people interested in learning about and experiencing straw-bale construction.

Read our debate on the life after the death of an architect.

A climate-efficient supermarket that generates more energy than it consumes

Consense 2014: Meet the Leaders of Sustainability