A brilliant heap of a book arrived on my desk the other day, an impossible heap.

It’s a fat, 1616-page monograph called Mongrel Rapture and it is the first of its kind dedicated to the important and highly influential knotted heap of an Australian architectural practice Ashton Raggatt McDougall (ARM). 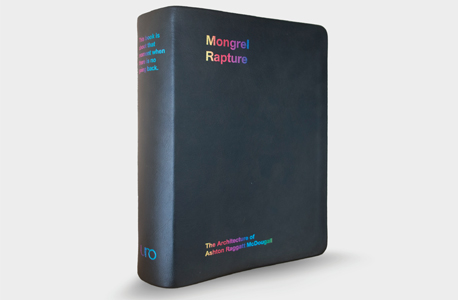 Designed by Stuart Geddes and published by Uro, the book’s size, fine matte paper stock and soft bound black leather cover are clearly meant to be reminiscent of a Bible. Despite the discreet cover text that is printed in a shimmering rainbow gradient (a type of rainbow serpent pop sublime, that is also used to break up the seven major sections in the book), carrying it around under my arm recently made this atheist positively apologetic when encountering others. The inference of this rather perverse but no doubt sincere association with an illustrated Bible, coupled with the ferocious humour of the title, works beautifully to mirror the spirit of ARM’s practice. After nearly 30 years ARM remains defiantly, generously and religiously dedicated to the dissemination of ideas and the ongoing, noisy dialogue around the development of an acute, experimental and critical architectural culture in Melbourne and, more broadly, Australia.

As one might expects, this is no precious coffee table book. Rather, like ARM’s buildings, it’s a delirious mash-up of influences, sources, experiments, scribbles, plans, elevations, sections, rantings, critical writings, interviews, essays and major projects, all piled one on top of the other. Through all the apparent chaos of the book’s form, it is clear that reflective writing, the exegetical text, remains a crucial continuum in the ongoing development of ideas and the collection of narratives that drive each project. This research methodology reinforces and refines the pursuit of a crystalline and figurative legibility in ARM’s work, what might be referred to as a type of pop literalism. The clarity of this image – an open book, a word, a face, an explosion, a crystal or a Bible, is where all the rapture is, but it’s also where all that mongrel nattering is, as well. And ARM has copped its fair share of it.

Indeed I write this at a time when their Swanston Square project that carries on its facade an image of the important Wurundjeri leader William Barak, has just been given its first airing. It’s an extraordinary and provocative feat of hyper-featurism. Following one of ARM’s Boolean strings up the civic spine of Swanston Street, Barak stares toward the Shrine of Remembrance, the site of one of the practice’s most remarkable and successful projects. There is much debate here, of course. Some, rather obviously, are questioning whether the image of Barak is being exploited to sell apartments. Others, more interestingly, are debating what constitutes a public memorial and who is doing the constituting. Is it that the public sphere, formerly charged with the civic duty to memorialise our past, has been colonised by the private sphere to such an extent that the private sphere is now delivering our most significant public monuments? Either way you cut it, an 80-metre-high image of William Barak, acting as a type of sentinel watching over our daily lives, is a powerful, iconic and, perhaps, radical image of reconciliation. Certainly, without the clarity of the image, without the risk of placing this image in the world to animate it, these public debates would not proliferate.

Like Deleuze and Guattari’s A Thousand Plateaus, Mongrel Rapture feels as if it has been conceived of as an open and inclusive system. It can be read in any order, is best used by dipping in and out at will, and acts as a type of tool box for thinking through and developing architectural practice in our local context and beyond. Indeed, it is a Bible of sorts and, for young architects and students in particular, it should be required reading.

This review by Callum Morton features in AR140 – Small Spaces.