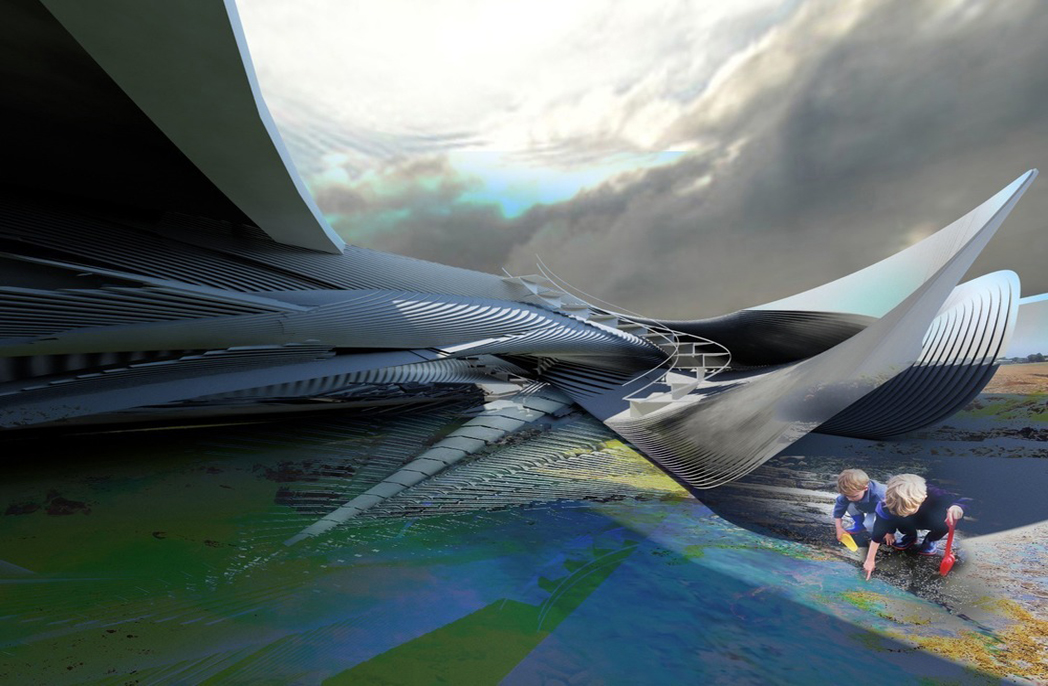 Experimental architect and psychologist Margot Krasojević is known for designing structures that engage smart materials and sustainability and her latest project doesn’t disappoint: she is currently working on ‘the first renewable resource positive energy hotel’.

The Harmonic Turbine Tidal hotel, located on Yalong Bay, on the island of Hainan in the South China seas, has been designed to harnesses tidal energy to generate electricity.  The idea is to redefine the hotel typology by embracing renewable energy to create a sustainable environment. 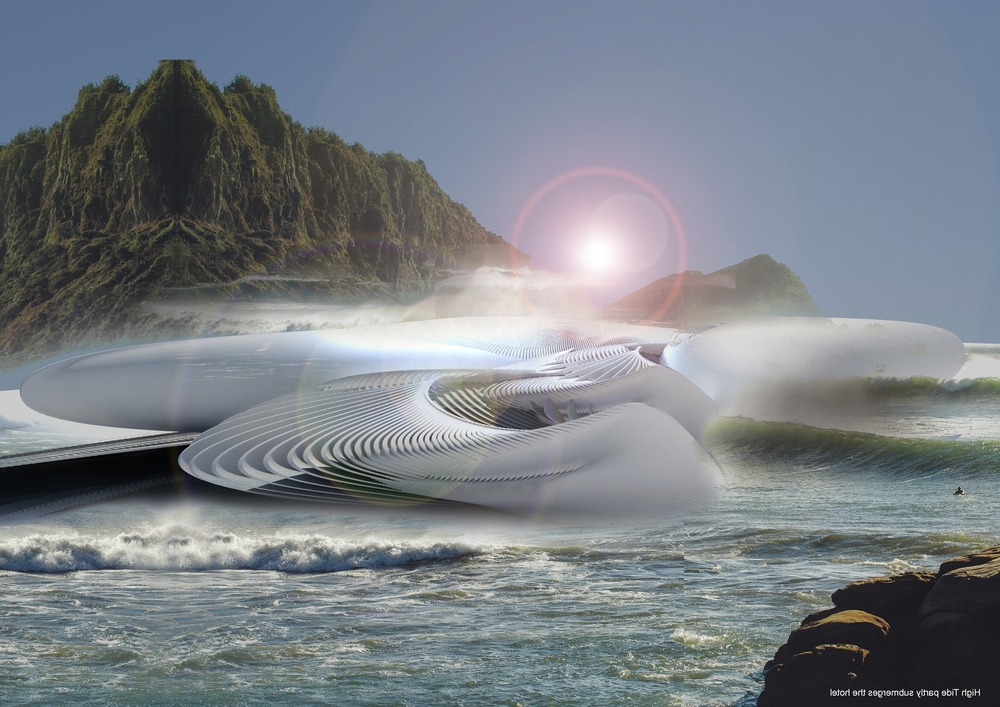 The hotel is the last of three tidal projects from Krasojević to further underline the importance of inter-disciplinary dialogue between architecture, engineering, renewable energy and industrial design.

Along the Yalong Bay’s coastline there are sheltered areas, but also sections which are a high-energy site exposed to winds and high waves: this is where the Harmonic Turbine hotel sits, partly anchored into the coastline’s rock with its elements free to gently move with the tide. Revolving water turbines are partially buried in the sand and respond to tidal waves creating a sustainable infrastructure as part of the hotel’s design.

The hotel’s primary goal is to combine hotel design and program with renewable energy, by using industrial and mechanical turbine engineering. 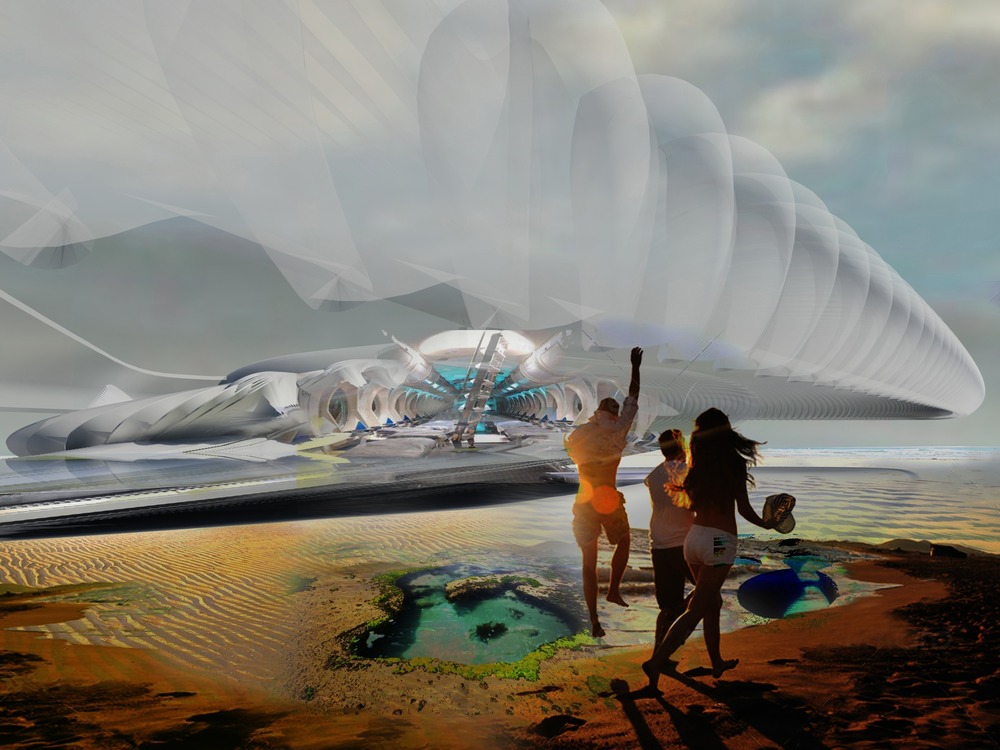 “This project creates a sustainable hotel typology which embraces the multidisciplinary aspects involved in the future of hotel design,” says Krasojević.

“Hotels will no longer be solely a consumer and catering industry, instead, they will incorporate interior design, lifestyle, as well programmatically redefine the hotel as an energy generating self-sufficient typology within the built environment. Currently hotels rely mostly on peak holiday seasons to be able to make a profit. However the nature of this hotel design will allow it to produce its own power in order to keep it running all year round and be able to return surplus energy back into the grid, contributing to the environment by producing usable energy for the surrounding area”.

The pipe water turbines are semi-buried into the sand, but exposed to the South China sea, which washes over the turbines in order to produce and store energy back into the hotel and the national grid, which will create a “step-up energy production hotel”.

“It’s not only contributing to the environment, but it also works as a capacitor as the entire scheme slightly moves in the tide. Pipe water turbines follow a spiral of paths into and around the hotel. The layout of these tidal turbines resembles natural tidal sand ripples and creates enclosures like the rock pool bays for guests,” adds Krasojević. 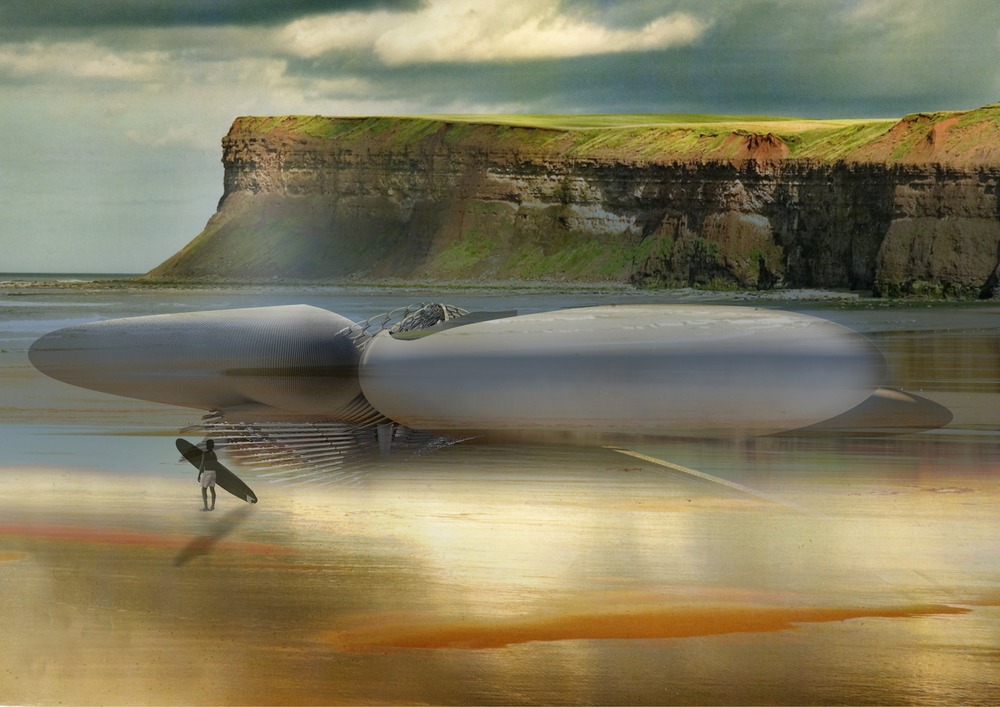 The idea behind the hotel came from rock pools and tidal power, to design a hotel that dips into the sea just enough to catch the tide whilst being able to sway in the current.

The hotel consists of two interlocking steel frame aluminium-clad elements. Similar to the hull of a boat these elements are lightweight enough to gently sway with the tide but strong enough not to break.

The main entrance platform is accessed by stairs and a ramp leading to the turbine hotel’s foyer or bedrooms via an entrance hatch, which descends into the viewing chamber that is partially submerged. 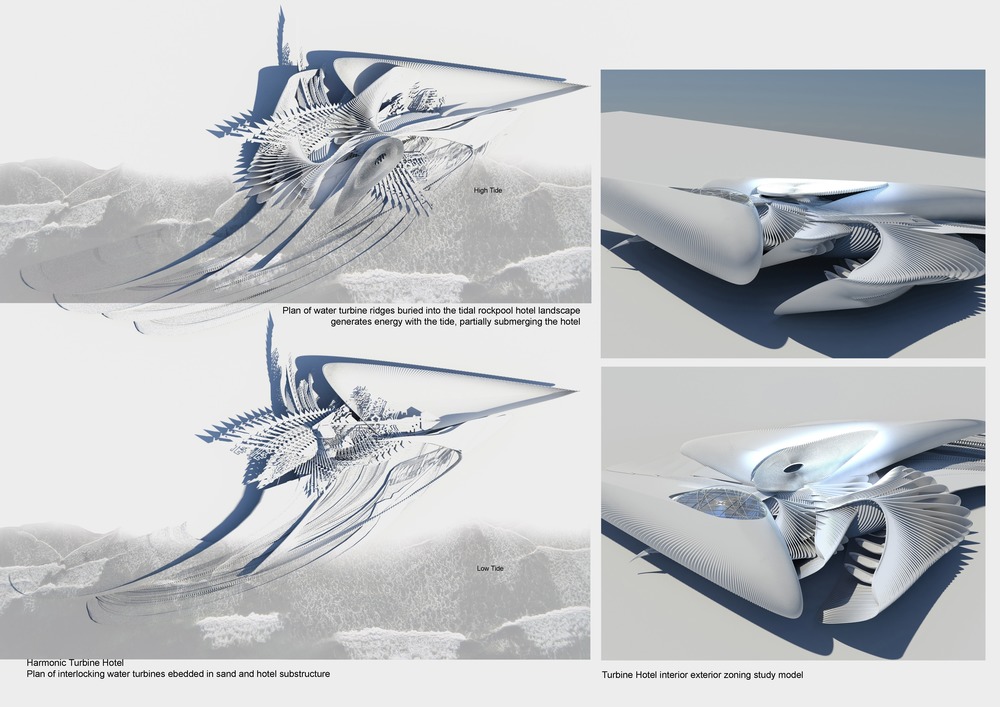 The foyer leads from the entrance hatch into the submerged viewing chamber, which is connected to 30 en-suite spa bedrooms. Each bedroom has a privacy glass-clad panel that makes the guests feel as though they are in a partly submerged submarine.

The building itself is pinned into the sand using partly exposed open foundations, which spiral into the substructure turning slightly with the tide. This movement helps harness renewable energy more efficiently.