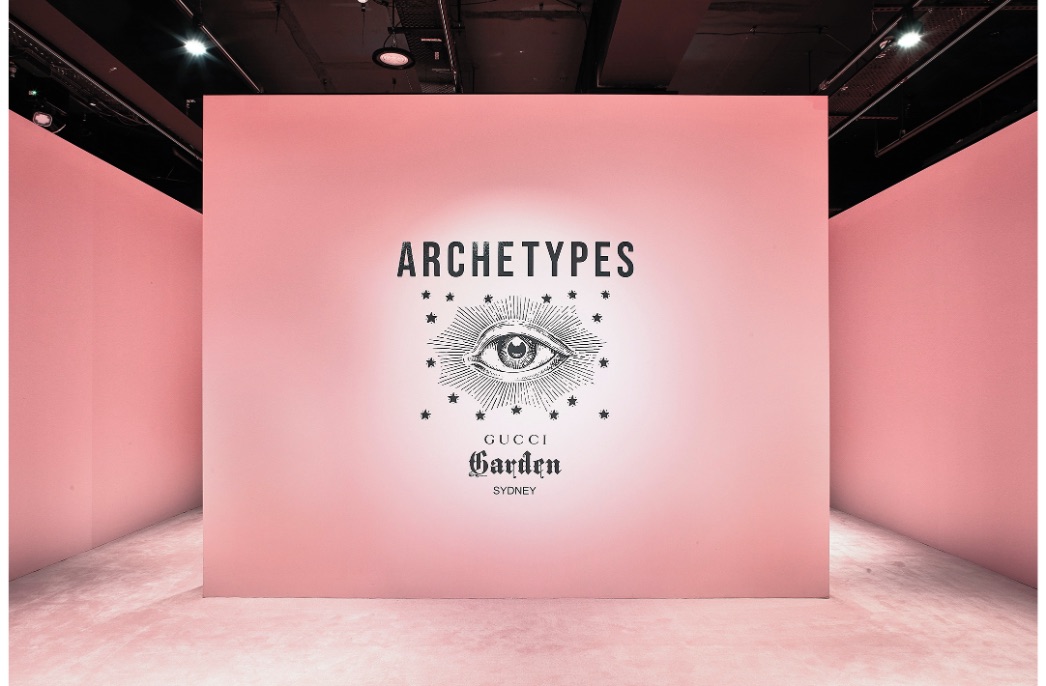 Gucci Garden Archetypes, a compilation of cutting-edge technology, elaborate hand-crafting and innovative interior design to create a sequence of distinct, immersive worlds, has been designed by Archivio Personale.

Sydney will be the seventh stop globally for this travelling wonderland following Shanghai, Taipei, Hong Kong, Tokyo and Seoul.

An archetype is the original form from which all copies are made, never to be recreated again, and every Gucci campaign speaks of a unique and unrepeatable moment – expressing the spirit of each collection while reflecting Michele’s inclusive, liberated and audacious philosophy.

Gucci Garden Archetypes delves into the multifarious inspirations from the music, art, travel and pop culture spheres that resonate through Gucci’s campaigns.

“I thought it was interesting to accompany people inthese almost eight years of adventure, inviting them to cross the imaginary, the narrative, the unexpected, the glitter,” says Michele.

“So, I created a playground of emotions that are the same as in the campaigns, because they are the most explicit journey into my imagery.”

Accessed via what appears to be a behind-the-scenes operations centre, visitors experience a split-screen live view of the exhibition they are about to enter.

Inside, a network of themed spaces and  corridors bring the intricate world - building of Gucci camp aigns to life.

Archivio Personale’s work is most welcomed in Sydney, according to Powerhouse chief executive Lisa Havilah

“The Powerhouse is thrilled to be exhibiting Gucci Garden’s Archetypes in Sydney, Australia,” says Havilah.

“Gucci’s extraordinary creative director Alessandro Michele draws on fashion’s affinities with art and music to create an exhibition that will take audiences on an immersive journey through past inspirations of the internationally renowned luxury fashion house’s most iconic campaigns.”

Viewers also enter the scented floral paradise of Gucci Bloom, a hidden imaginary garden becomes a place of freedom for the three stars of the campaign – actress Dakota Johnson, artist and photographer Petra Collins, and actress and model Hari Nef.

The Beloved Show campaign is recreated, showing the set where Hollywood A-listers joked around in front of a skyline with the late-night host while proudly showing off their handbags, the four Gucci Beloved lines – the Dionysus, Horsebit 1955 and the timeless Jackie 1961, bags that tell their own story.

The obsessive collections of the Fall Winter 2018 campaign fill the space from floor to ceiling, as visitors become immersed by shelves stacked with hundreds of cuckoo clocks, ceramics and Marmont handbags.

Guests can also find themselves in the 80s nightclub bathroom of the Berlin-set Spring Summer 2016 campaign.

Visitors can even enter a mirrored labyrinth to go inside a stately home like the one at the heart of the Cruise 2016 campaign, and ride on an LA subway carriage like the one that made an appearance back in the Fall Winter 2015 campaign.

The Gucci Garden Archetypes exhibition will be open to public until 15 January 2023 at the Powerhouse Ultimo, 500 Harris St, Ultimo, Sydney.

Tickets are available for booking here.

You can also read more about the Global Life of Design at the NGV, an exhibition which examines and reveals the interlocking networks of power, economics and influence that continue to shape design practices today.