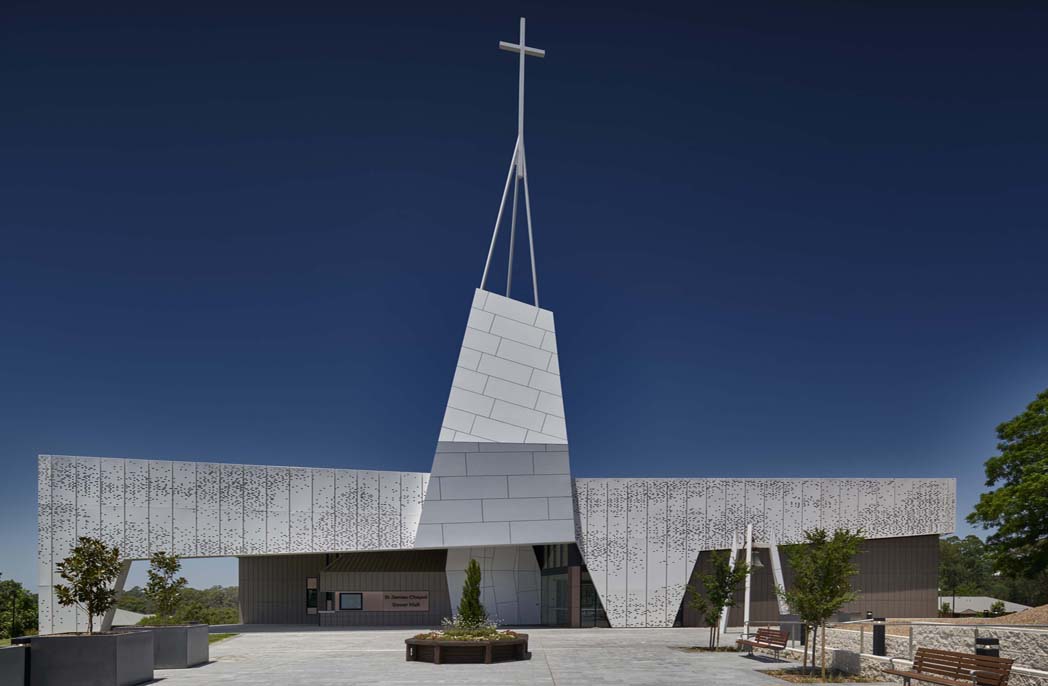 Redefining the role of a place of worship within a community, the team at Jackson Teece draws on their experience of public buildings to create a village centre of consummate relevance.

Initially, the St James’ chapel redevelopment was not part of the masterplan; however, it was soon revealed that the chapel no longer met functional requirements and had no Heritage value. Anglicare then briefed a purpose-built chapel/multifunctional space that could hold up to 400 people.

Effectively, a lack of flexibility stymied its use as a community resource beyond ceremonial gatherings. As such, this building was also put to tender with Jackson Teece engaged to produce a concept and develop and then fulfil a brief with Anglicare that would truly reflect its needs. 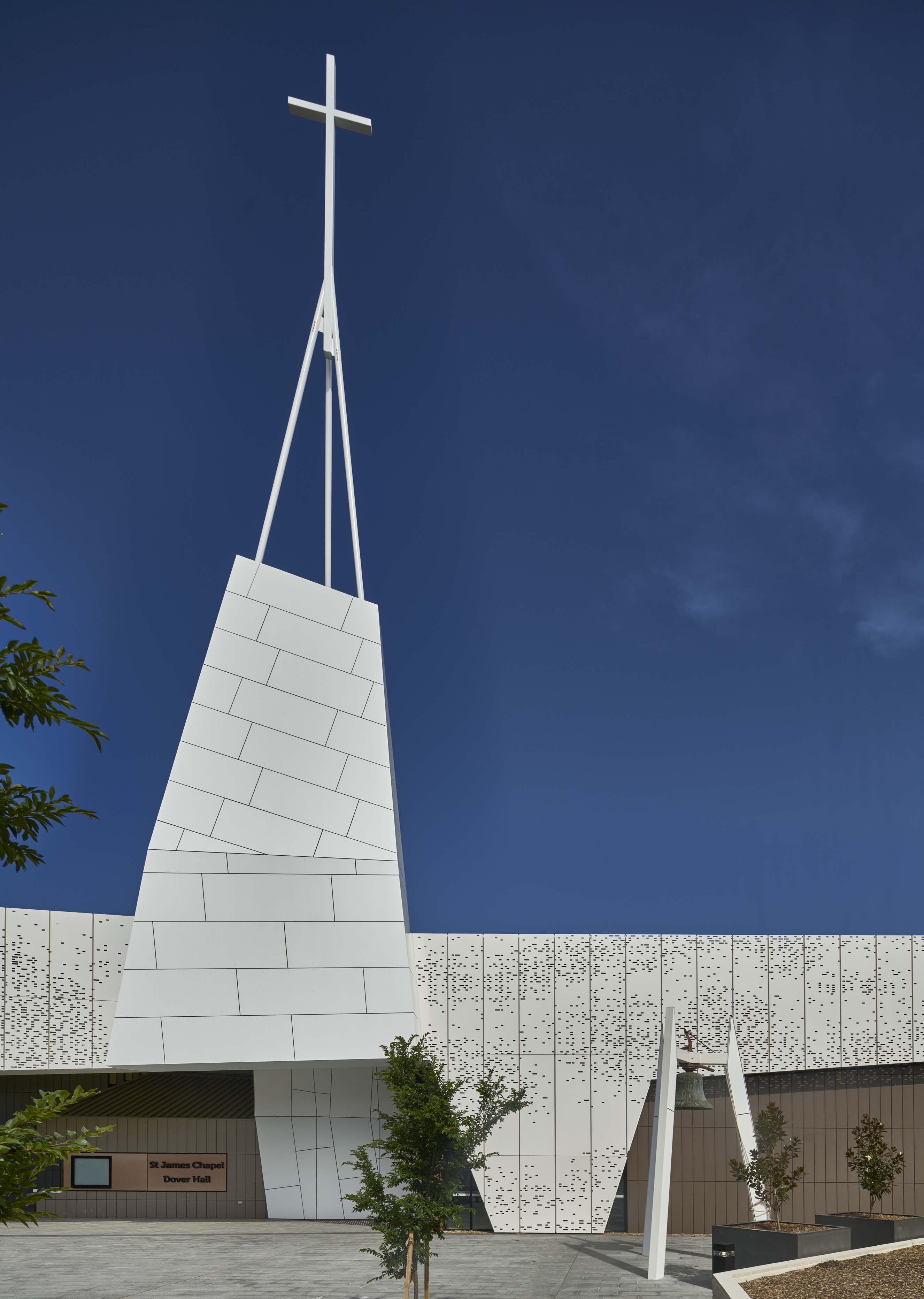 Taking up the previous chapel position alongside Lober House, the bowling green and the café around Lober Square, the new chapel is the final piece forming the heart of the community. The design responds to the way the community comes together, completing the public domain renewal as envisaged by the architects.

From an architectural perspective, the building is beautifully layered, with a terracotta clad envelope enclosing the whole with a visual and physical solidity. Covering this shell is a veil of white perforated aluminium.

“The idea of a veiled building is something we have been exploring for some time and it is very well-suited to St James’ Chapel where a view is not a primary concern. Instead, there is a delicate sense of calm, and a focus on worship,” says Damian Barker, Jackson Teece principal. Creating both an atmospheric and architectural impact, the veil filters light to a dappled play on the building surface. At night the impact is reversed with a seeming skin of warm twinkling lights covering the whole. 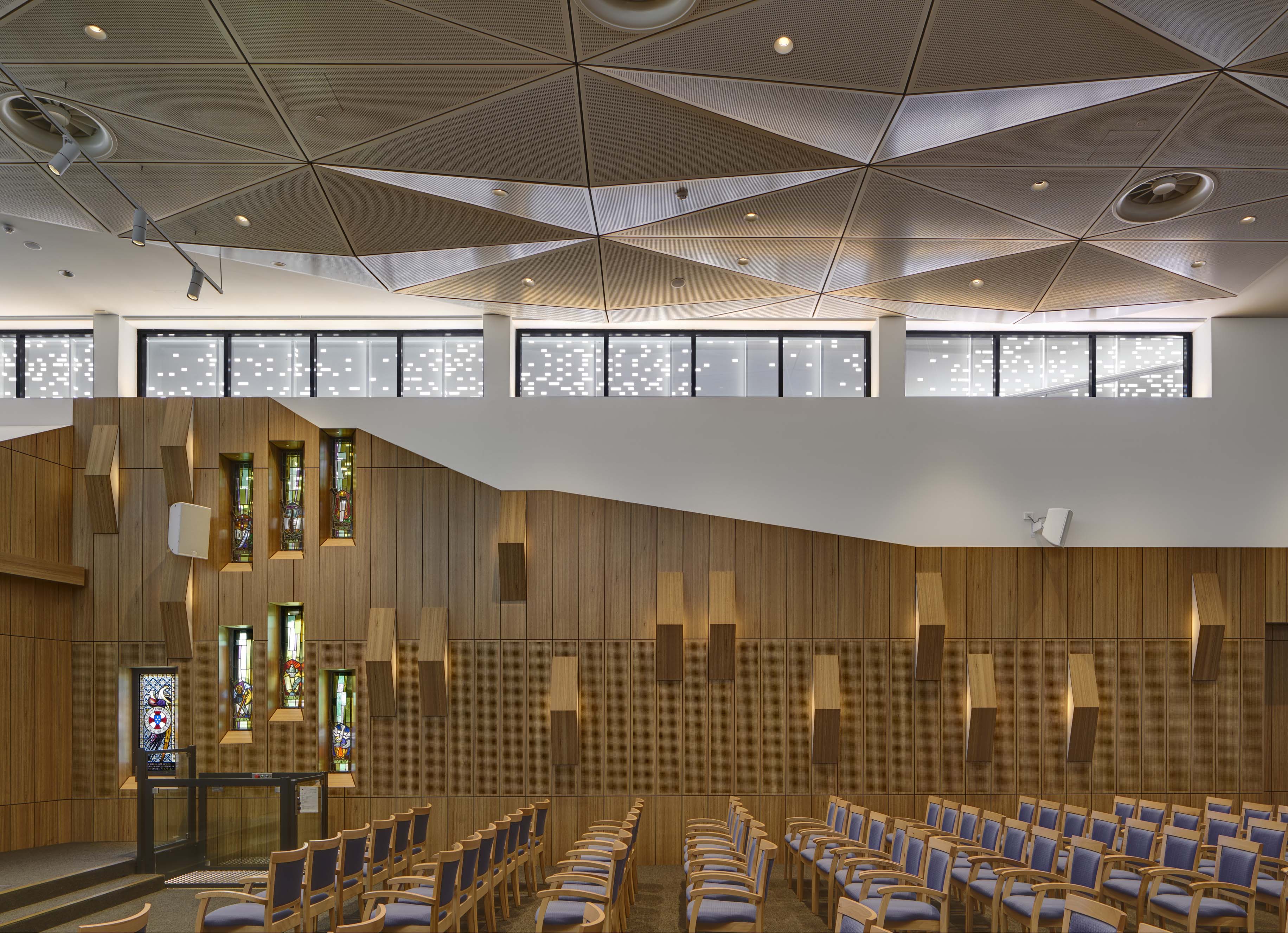 One of the key considerations of the design was the nature of social gatherings and the need for a relaxed means for interaction. Taking their learnings from work on public and religious buildings, including the Bondi Synagogue, Jackson Teece’s team designed the large forecourt specifically to allow the informal before and after chats inherent to communal gatherings. It additionally lends a more relaxed tone to the function of religious gatherings and is thereby appropriate to the village style of the community.

The gathering principle is further augmented by a large interstitial space that affords weather protection and ample opportunity to stand around talking without time constraints. A very large pre-function space is provided by the immediate internal space when entering the building. 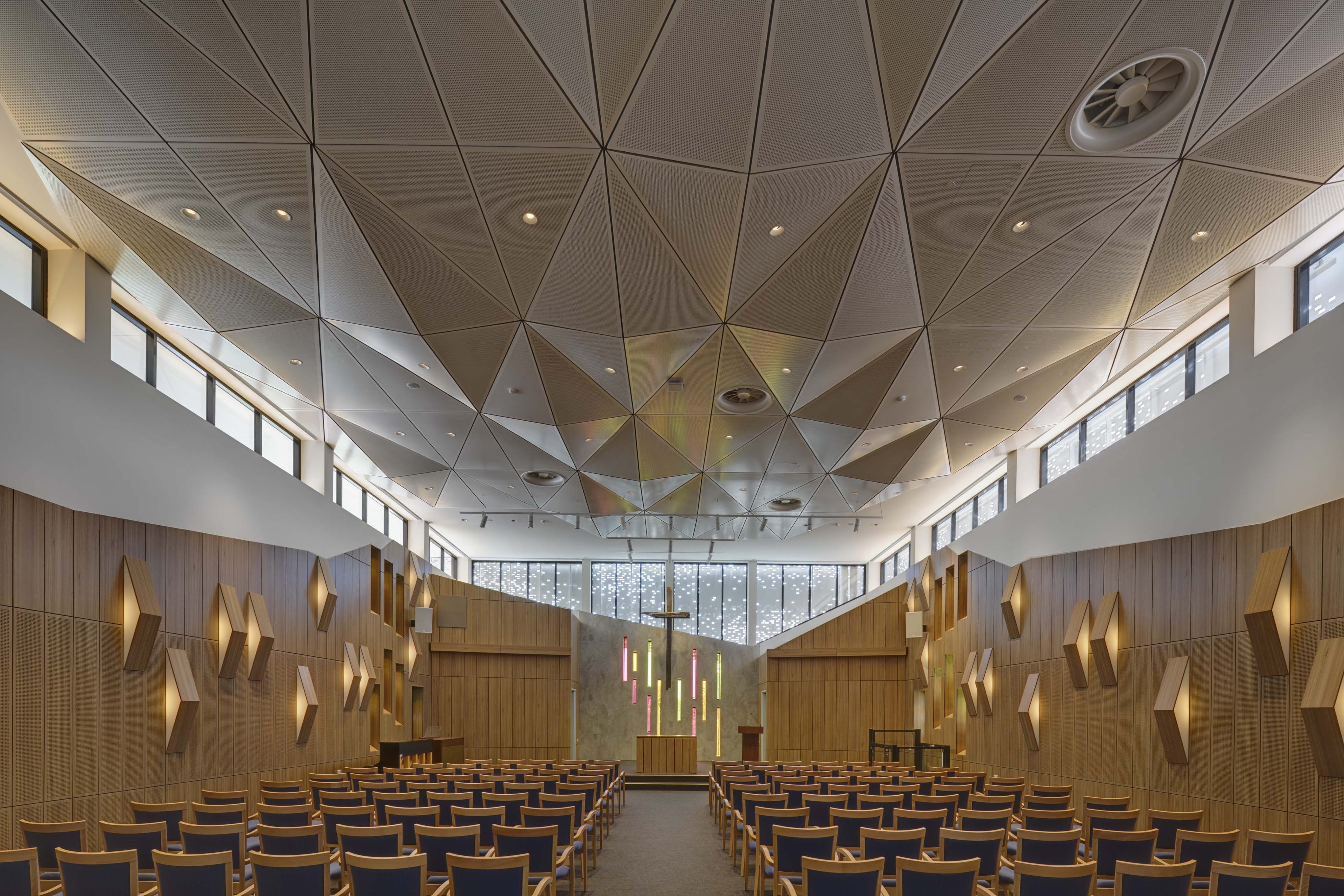 Hidden from view – but servicing the chapel, pre-function space and courtyard – is a large kitchen that underscores the pervading theme of community and shared meals. This consideration was significant to the main rooms of the chapel, which uses two automated acoustic sky-fold walls to create a flexible and functional space, quickly and easily separating or connecting the chapel and Dover Hall.

When both walls are closed, they create a central corridor connecting Lober Square with the lower residential villages. “The operable dividing walls were a very important decision in the design, not only for flexibility; functionality was key to the building’s success. Our objective was to design an easy and elegant transition between two spaces, to encourage and not deter people from rearranging the space, sometimes multiple times throughout the day,” says Barker.

When opened entirely, the space reads as one room and a continuation of the chapel, with the focus directed to the communion table. When closed off, however, the rooms have the feel of a secular function space and can be dressed to suit myriad occasions. The chapel space is warmly inviting with honey-toned timber used on walls and loose furniture, while ceramic tiles clad the wall behind the cross and communion table. 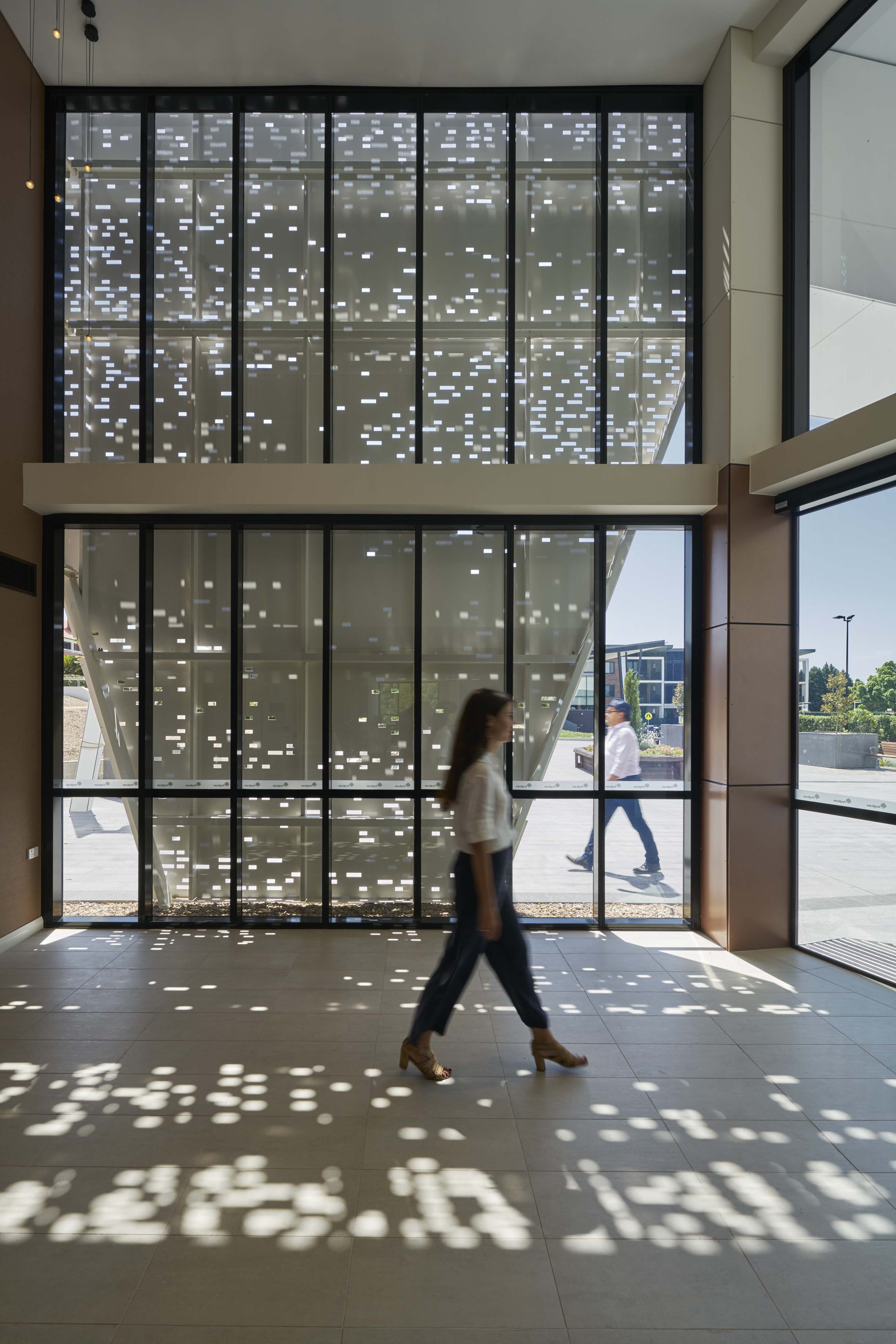 Interestingly, free-standing chairs were selected for their ability to be moved around to accommodate the walkers, wheelchairs and other means of assistance the aged congregation requires. The carpet too takes this into account, being softly forgiving to both falls and scraped chair legs. The option is also favourable to acoustic control, an aspect that is further addressed by the geometric forms of the ceiling.

Echoing the fall of the surrounding land, the crisp white ceiling is splashed with a gentle reflection of coloured light emanating from the stained glass and becomes beautifully opalescent at various times of the day. The original bell, stained glass windows and wooden cross from the 1965 St James’ Chapel, each having its own history, were key considerations in the design. The bell is now housed in a contemporary frame by the front entrance, while the cross retains its place behind the communion table.

The stained-glass windows (12 apostle windows and two dedicational scenes) have been placed into the side walls. This allows both a side view from the chairs, but also the opportunity for members to approach the windows for an intimate experience of their beauty and message. New coloured glass has been placed behind the communion table within long thin vertical apertures. 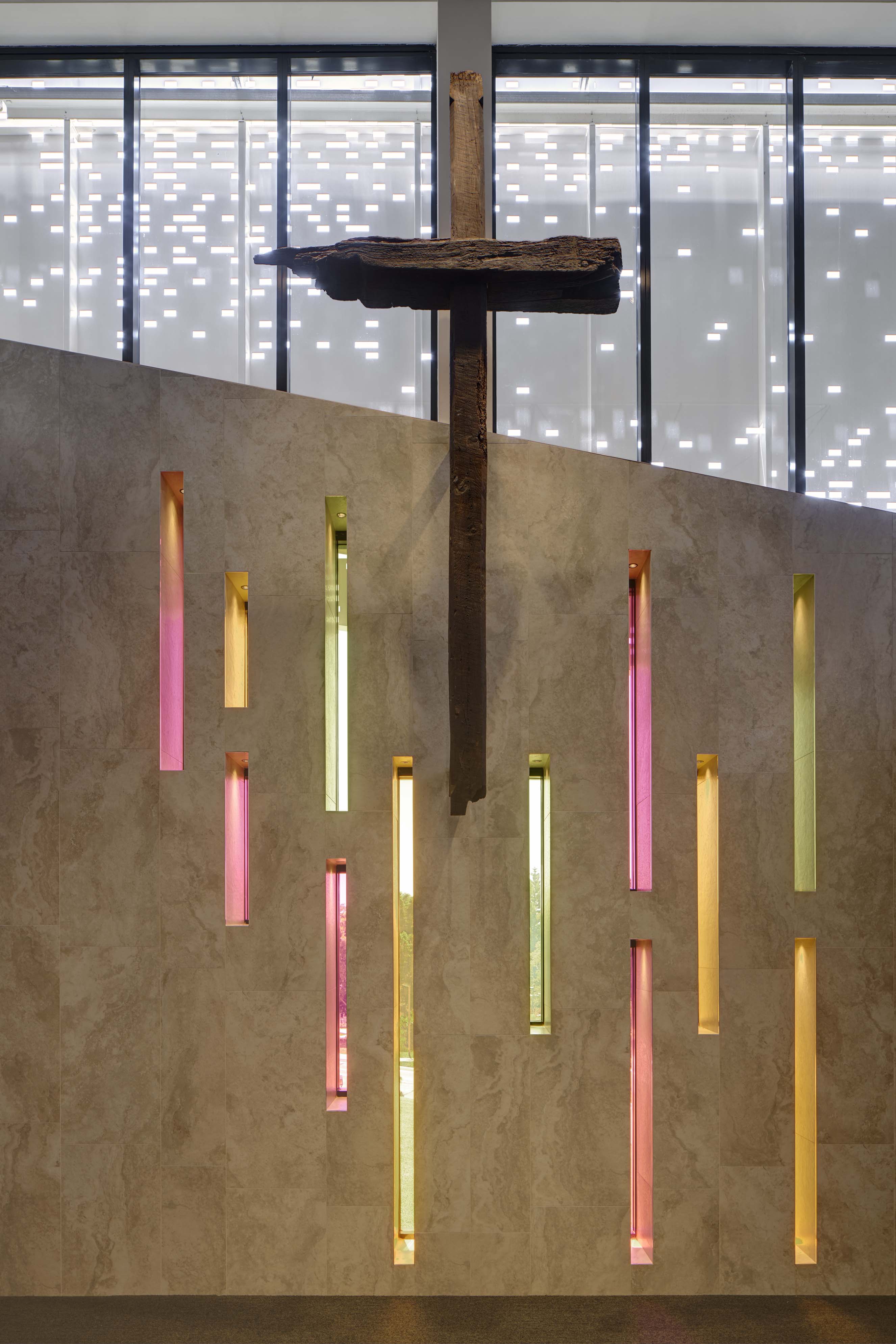 The level of very specific user consideration in this project is to be lauded with room use, accessibility and individual needs all addressed with care. It is, however, the understanding of the community’s needs that has led to a space that is an extension of the residents’ home, a relaxed and welcome environment encouraging social interaction. As a symbol of the Christian faith, it has also delivered gravitas with a building of strength and rigour, elegance and the magnificence of a fine 32-metre spire.