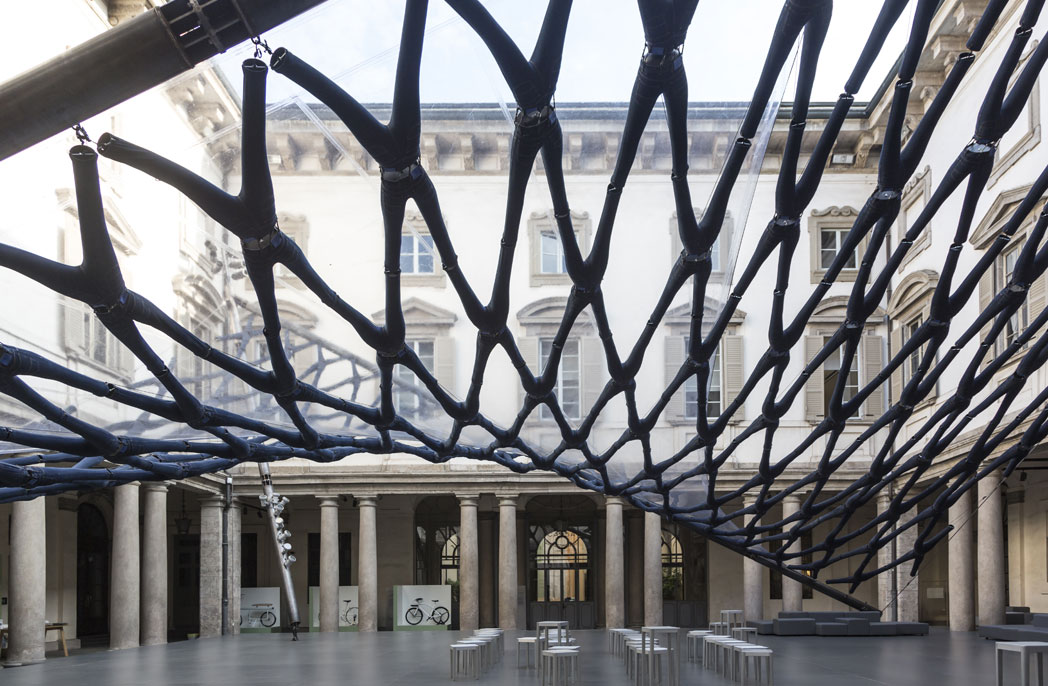 The 2017 Milan Salone del Mobile has wrapped for another year, we give a rundown on some of the installations from the FuoriSalone that you may not have already seen but are well worth a gander.

1. Off The Cuff by Diller Scofidio + Renfro

Known for their intersection between art and architecture, Diller Scofidio + Renfro has worked on several significant cultural and civic buildings including the Lincoln Center redevelopment and the Highline, both in New York.

The Palazzo Litta courtyard has traditionally been a mediator between the public and private realms, and it was this that drove the concept of using jeans as the main material.

The individual pairs of pants reflect the more intimate, human scale, while the unifying connection between them from waist-to-waist and ankle-to-ankle creates a singular form. The denim material also paying homage to its ‘everyman’ history.

Taking over a space next to the Museo delle Culture di Milano in Tortona, Corian collaborated with Cabana Magazine to explore a world of maximalism.

The space drew people through a hallway of eclectic sounds and intricately laser-cut panels of Corian to reveal the elaborately decorated cabanas, replete with a Corian-made water fountain feature.

In Brera, Danish brand Bang & Olufsen settled in for the Milan Design Week at the Spazio Radetzky to preview its new BeoSound Shape speakers.

In a space designed by the brand’s in-house architect, viewers could see the new product in a series of installations – from an exploded view, to an experimental ceiling feature, and the standard wall setting.

4. The Visit by Studiopepe

The Italian darlings, Studiopepe, took over an apartment in Brera, decking it out in their signature style.

Geometric shapes and a bold palette play up to a modern reinterpretation of mid-century shapes; the apartment featured a range of furniture and brands – all artfully displayed.

Taking the concept of a visit, visitors to the apartment were required to RSVP, given a timeslot to visit The Visit. As Arianna Lelli Mami and Chiara Di Pinto explain ,“The Visit is an act implying a physical place and the people who host and are hosted there.”

The giant space included multiple rooms and scenarios (bedroom, hospitality, living areas), all incorporating the extensive range of the brand, from carpets to lighting and furniture.

Another striking element of the installation was the series of oversize photographic artworks of bugs. In collaboration with Levon Biss, the microscopic portraits show an incredible level of detail.

Stay tuned for a full wrap up from Milan. We will be releasing a detailed report in the coming weeks.