Above image credit: John Tsiavis. All other images courtesy of Hermès

After 13 months of close collaboration and late night phone calls from one side of the globe to the other, French retailer Hermès and Melbourne-based designer Christopher Boots have revealed this year’s Christmas window installation for the brand’s two stores in New York.

On display until mid-January next year, both Madison Avenue stores feature work from the Melbourne-based lighting designer under the guide of the exhibition’s theme, ‘Metamorphosis’. Taking from this grand idea of transition and regeneration, Boots’ has drawn from his Greek heritage and looked at the classical world to influence the exhibition. Heavily inspired by geometric shapes, the medium of the window installation has allowed him and his studio team to incorporate elements of scale, colour and tone to meld together both his lighting designs and Hermès’ products. For Hermès, this collaboration is another success for a brand dedicated to a strong tradition of working alongside artists and designers. Past collaborations include those with such designers as Tokujin Yoshioka, 2009, Tokyo; Design Systems Ltd, 2013, China; and Lekker Design, 2013, Singapore. For its 2013/14 display, Hermès commissioned the Australian designer to create one of the brand’s most adventurous installations yet.

As an Australian designer, this commission offers Boots a fantastic platform from which to launch his studio into the international market. After finishing an industrial design degree, Boots worked under Geoffrey Mance, the iconic Australian designer, and then took over Mance Design after his mentor passed away. After several years Boots broke away and started his own studio in 2011, quickly constructing his own style with such recognizable pieces as Prometheus I & II, the Diamond Ring and Asterix. In 2012 his Orp and Phasmida designs were featured in the Lexus Design Pavilion within the celebrated birdcage for the Melbourne Spring Racing Carnival. Boots’ designs are already influenced by the classical world, hence the use of both heavy and light geometric shapes to conjure up archetypes such as the fire-wielding Prometheus or to reference the Greek mathematician, Euclid, via Boots’ Parallelogram and Quadrix designs.

For Hermès, this has translated into a stunning visual for passers-by, with its products being immersed into the stories that Boots’ designs collectively tell. In one window, framed by the emblazoning Prometheus IV, a pearl-toned purse by Hermès bursts out from the cerulean background and sits as a jewel amongst the handcrafted bronze and crystal geode sculptures surrounding it. 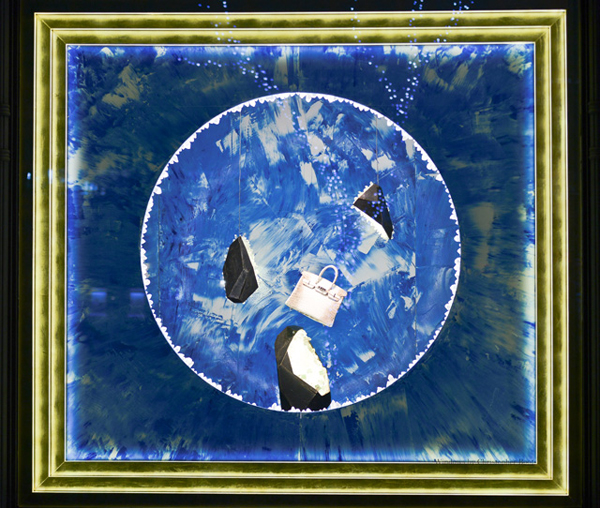 Boots’ ability to immerse Hermès’ products into the narrative of the installations has the impressive result of giving precedence to neither the designer nor the brand, but instead focuses on what is most important for a window display: the casual passer-by.