Home • Process • Beyond the web 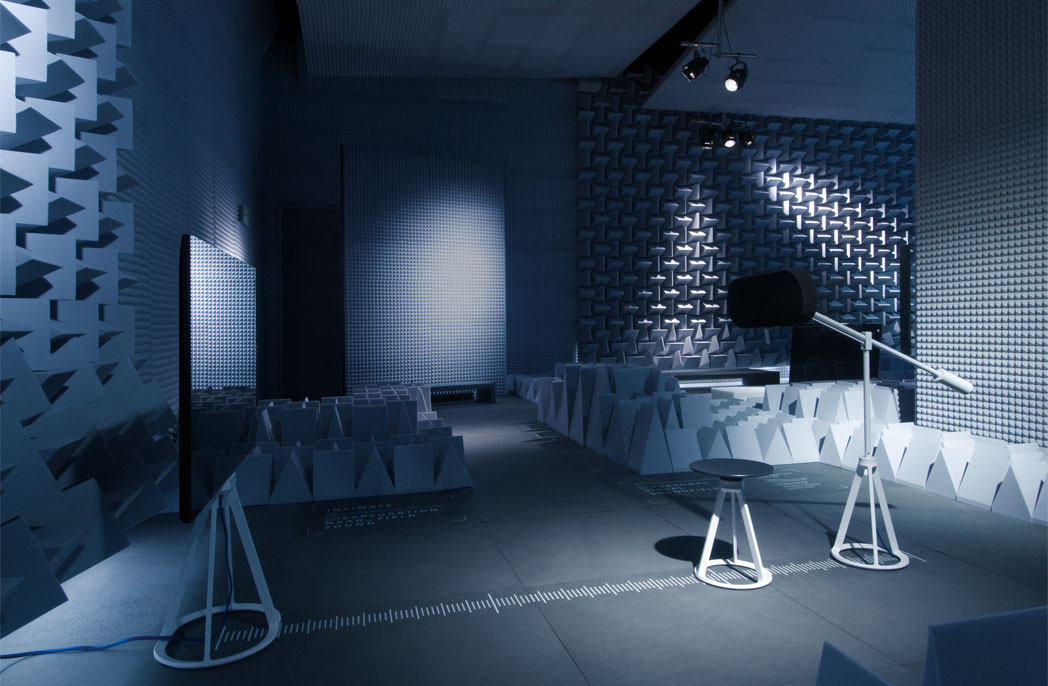 Image above, the Sony audio installation in Milan by Edward Barber and Jay Osgerby. Written by Marcus Piper.

MEZZANINE explores the way technology is redefining the concept of a well-connected home – taking us beyond the cobwebs and cables.

When Benjamin Franklin threw a kite into the sky one stormy night in 1752, he could not have foreseen the tangled web of cables that would result behind TV cabinets and bedheads of households around the world more than two centuries later. His electrifying discovery was akin to that of Thomas Edison, who was equally oblivious to the fact that his invention of the simple light globe would illuminate the way we live for years to come. Together with a certain Mr Bell, this group of inventors sparked possibilities that today see designers creating homes that break free from those tangled dust-traps with the same spirit of ingenuity and scientific discovery. Transporting ourselves to the 2010 Milan Furniture Fair, we see the London design duo Edward Barber and Jay Osgerby, who presented an anechoic (acoustically dead) room filled with prototypes of lighting, sculpture and furniture developed in collaboration with Sony’s Tokyo-based R&D department. As viewers moved towards the objects, they were presented with more than an aesthetic exploration. Each piece was embedded with special solenoids (a type of electromagnet), which activated Sony’s actuator technology, turning the glass, timber, Corian and ceramic objects into audio speakers.

While we might recognise Barber and Osgerby for their work with almost every major furniture manufacturer in the world, the pair are also at the forefront of the union of creativity and technology. Launching Map Project Office in 2012, a strategy-led design studio working across product development and user experience, the team have designed flat fabric speakers for Yamaha, a series of Kickstarter-based tech projects (including the first family-focused communication platform) and some rather fun experimental vehicles for the Honda Great Journey project. The pair have also applied their trademark minimal forms and technical understanding to the Axor One shower thermostat, designed to allow the user to intuitively control water temperature and volume. The device can control up to three showers or baths from one central ‘dock’.

Barber and Osgerby are not alone in the development of well-designed tech. Fellow Brits Benjamin Hubert and Jasper Morrison are taking their reputations for object design to new heights. Hubert’s studio, Layer Design, is currently working with the likes of Samsung and Braun on new ways to wirelessly connect the home, and recently launched a range of ceramic charging trays for Bitossi Ceramiche utilising touch-charging technology, which is growing rapidly more popular, with Corian also developing wireless benchtop charging.

Perhaps a little more anti-tech, Morrison has taken on the role of creative director for the new Swiss mobile phone brand Punkt, the disruptive approach of which to communication aims to remind us what is important in life. Minimal in design and functionality, the Punkt phones, alarm clocks and chargers are single-purpose with the M01 phone being just that – a mobile phone that allows calls and messages. No – there is no camera, and no social media!

With all the high-tech trickery emerging, the take-homes from these developments are starting to produce new possibilities on a broader scale. Designed by French brothers, Ronan and Erwan Bouroullec, the typographically-inspired Serif TV for Samsung incorporates a custom user interface to allow users to control their viewing from a simple app. Designed to be seen as an object when it isn’t a media source, it would be seemingly sacrilegious to watch The Simpsons on such an elegant screen, though who could forget that “light goes on, light goes off ” moment when Homer found himself responding to the simplicity of the fridge light effect.

Used in other parts of the house, such as kitchens, bathrooms and bedrooms, the simplicity of the automatic light can bring us the same joy as it did to Mr Simpson. Adele Locke, lighting specialist at Mint Lighting, suggests: “With forethought, this is something that is dead easy to incorporate and super cheap.” Though, as she points out, this piece of low-tech needs to be considered early in a project, as rewiring a home can be expensive and a nightmare for electricians, especially if there is insufficient timber in the joinery, in which case it can end up being impossible to achieve. Locke also sees some more complex innovations illuminating our homes in the not-too-distant future. Convergence, that buzz-word of the naughties, has come to Edison’s simple invention with new LED light globes developed that include speakers, sensors, security systems and Wi-Fi capability. It is a development that she sees as one of the most inspiring in the residential lighting spectrum with the possibility to control light levels and colour temperature throughout the day. According to Locke: “The reason LED is so exciting for blending technologies is because it is electronics.”

Highlighting the fact that the components of this new source of lighting speak the same language as other electronic components, she adds: “This could never have been done with halogen or incandescent globes. The electronic system is already there and so LEDs can play nicely with their other electronic friends.” While truly connected homes, where you can control everything from a mobile device, are a way off in Australia (due in most part to the limited access to bandwidth), Locke says that in countries like the US where data is a little more free-flowing, innovation is constant. Internet via light sources and lasers replacing globes are all on the horizon she suggests and, like Franklin, who showed that electricity can connect earth to sky, we continue to discover ways technology can connect our homes, just without the tangles.