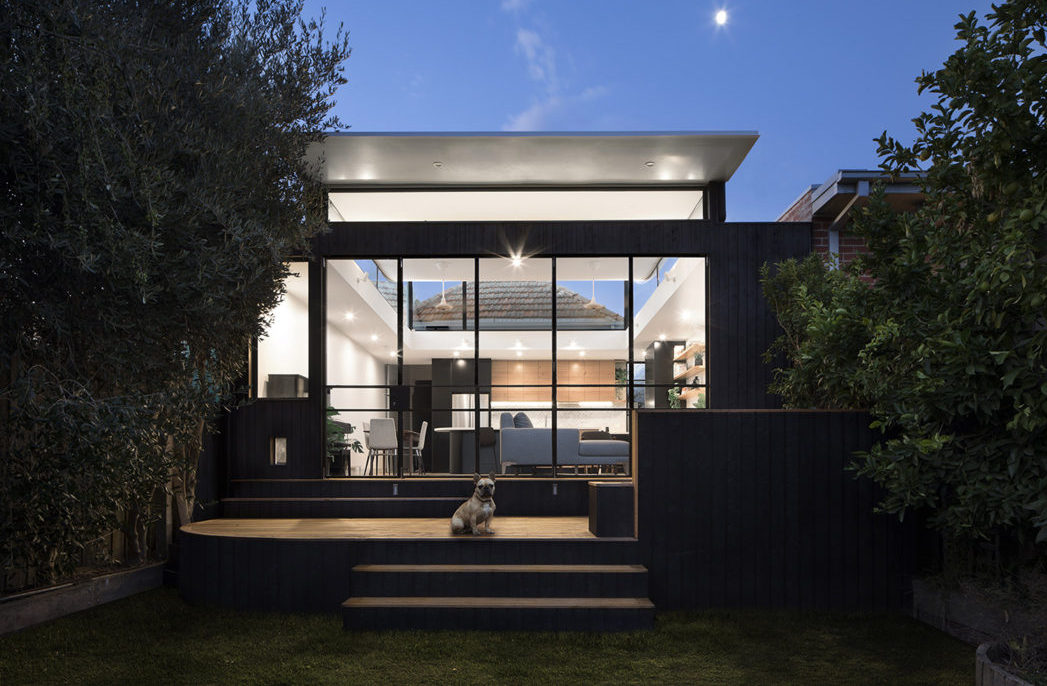 When Ben Callery of Ben Callery Architects was contracted to renovate and extend a Melbourne home on a 6.5-metre-wide block, walled in on both sides, and with a less than ideal aspect, some creativity was called for.

“In response to the site challenges, we popped up the roof and then curved it up towards the north,” says Callery. “The large highlight window brings in warming winter sun and the perimeter of clerestory windows brings light in at all times of the day,” he says.

The convex curve of the Curvy house’s roof bounces direct sunlight down into the living space and also creates an illusion of space. It also directs the eye up and outwards, increasing the sense of vertical space in the house while the long tail of the roof cantilevers over the back deck and accentuates the feeling of length on the small site.

The detailing is carefully considered to create a feeling of floating. The slender structural frame and black steel windows make the roof feel detached. The light coloured ceiling contrasts with the dark solidity of the external walls and cabinetry, increasing the sense of weightlessness.

The heritage parts of the Curvy house are retained and celebrated. The original pitched tiled roof is framed by the highlight window and juxtaposed with the new bright interior – a striking reminder of the context. The hard plaster in the old lounge was peeled away to reveal the original brickwork wall and brick lintel that are a feature of the new bathroom, which celebrates the texture of the old.

“This project sums up our approach to design – using creative means of getting sunlight into difficult spaces, while creating an uplifting feeling for the occupant,” says Callery.

Want to read more about clever approaches to inner-city renovations? This could be right up your alley.

Been following Ben’s practice for a while. He routinely manages to extract something wonderful from a tight constraints and meagre dimensions.