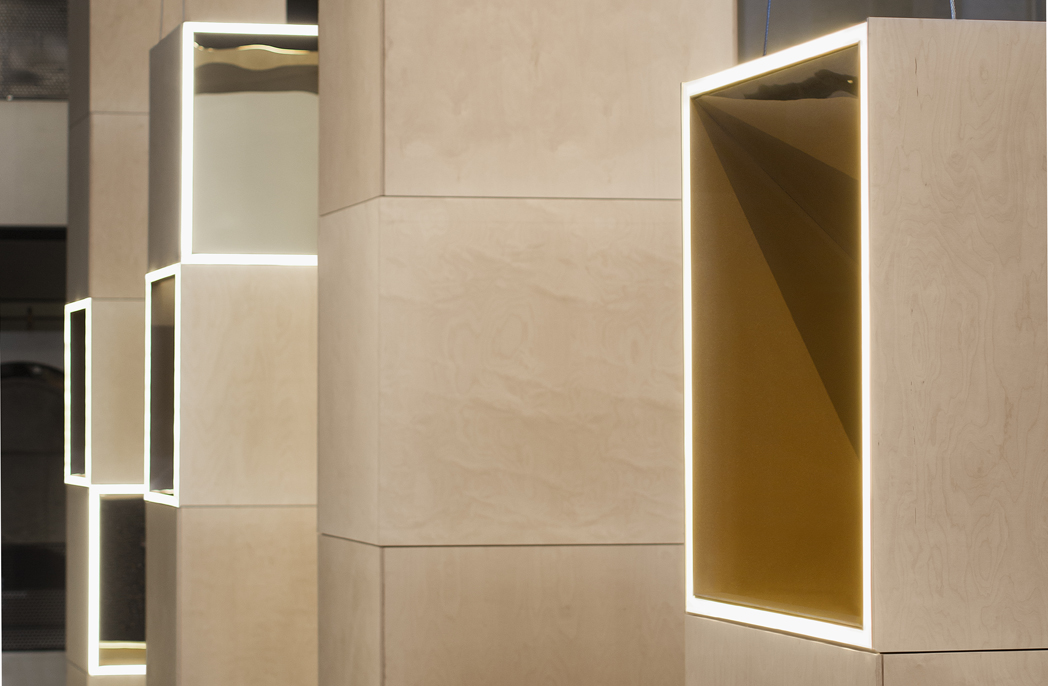 One of the main aims of architecture is to bring people together – to frame and contain a space where human connections can flourish. Four Periscopes, commissioned by MAAS (Museum of Applied Arts and Sciences) and created by TRIAS, highlights the importance of communicating within our ‘commons’. It encourages visitors to reflect – quite literally – and connect with one another through a matrix of mirrors.

From afar, the four suspended, timber-clad towers are evocative of Sydney’s skyline. Up close, visitors encounter a series of immersive, periscopic mirrors. The periscopes become portals that transport us away from ourselves and, instead, encourage interactions with others.

Peering into each tower reveals a complex web of connections and lines of sight, with unexpected views from the balconies to the ground floor, and from one tower to another.

How did the project come to you and how did it evolve?

TRIAS: Four Periscopes came about as the result of a competition run by Sydney’s MAAS. Three local practices were invited to submit a design proposal for an installation within the museum’s Turbine Hall. Our proposal, Four Periscopes, was fortunate to be selected as the inaugural winner of the competition.

Following the competition process, we worked closely with MAAS to realise the project within a tight, four-month time-frame.

The brief requested a design that engaged with the museum’s Turbine Hall. The aim was to change the way the space is experienced and enjoyed by visitors. The project also needed to respond to the themes of Common Good, an exhibition that opened alongside the periscopes as part of the Sydney Design Festival. 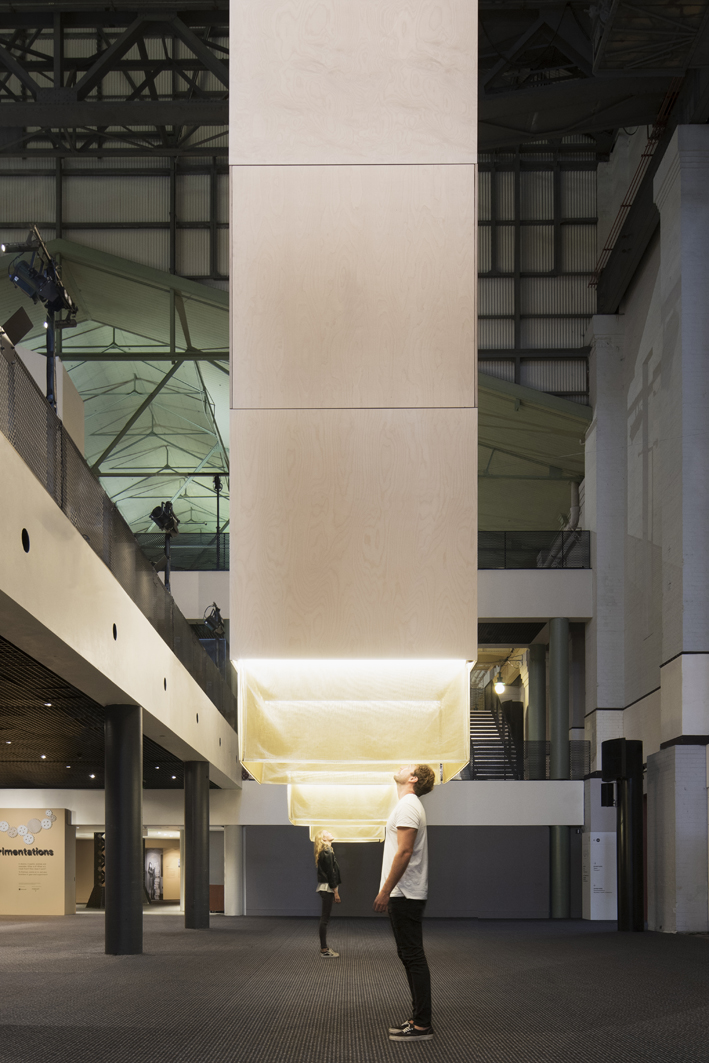 Four Periscopes emerged from a series of observations about the Turbine Hall, where the work is now installed. When we first visited the site, we noticed how this grand, cavernous space is experienced from multiple vantage points – it invites visitors to look up, down, around and out. We saw the potential for an installation that would encourage visitors to move around the museum, exploring both the space and the collection with greater curiosity.

The idea of periscopes emerged in the design process, through drawing and discussion. We believe that one of the primary purposes of architecture is to bring people together. To us, Four Periscopes highlights the importance of communicating within our ‘commons’ by encouraging museum-goers to reflect and connect with one another via the mirrors.

Our design was also influenced by the work of contemporary artists, such as Yayoi Kusama and Olafur Eliasson, who use immersion and reflection within their work. The periscopes employ concealed mirrors to connect people on the balconies to the ground floor, and from one tower to another. Part of the joy of the installation lies in witnessing unexpected interactions, and in deciphering how each tower works. The work is at once visually simple and technically complex in the way it is conceived and experienced.

Since the periscopes are so visual – and visible – we also liked the idea of subverting the role of mirrors. In response to our image- obsessed culture, Four Periscopes transforms the mirror – a traditionally visual device – into an experience. The periscopes become portals that transport us away from ourselves and, instead, encourage interactions with others. They create complex webs of connections, and layer lines of sight. 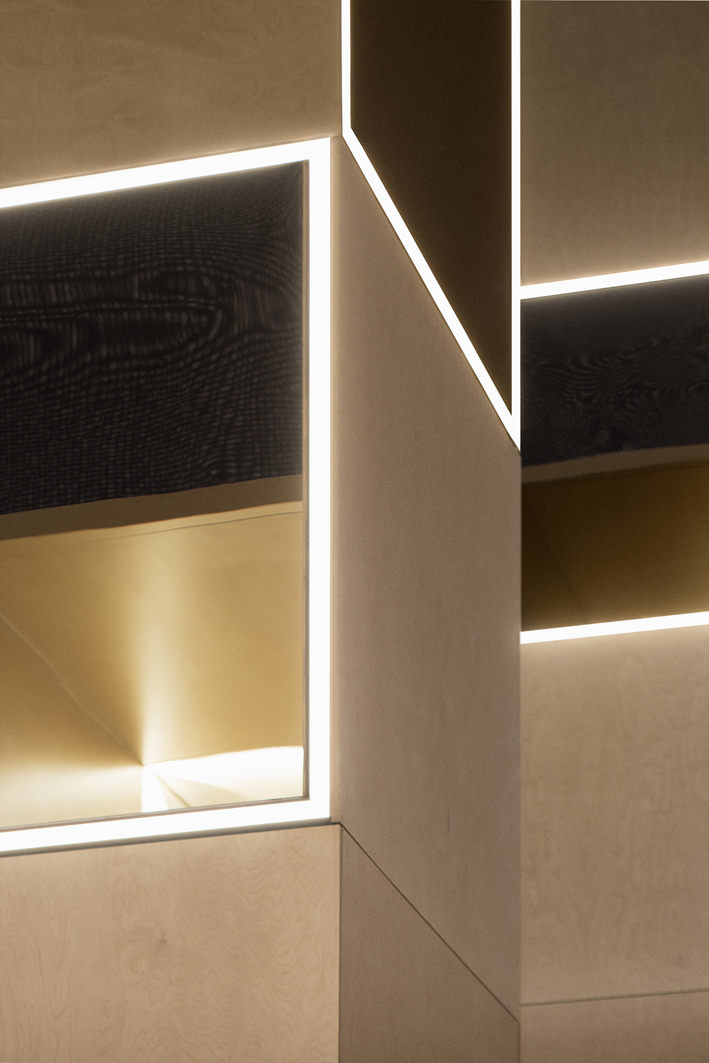 After being selected for the commission, we developed the design using both physical and 3D models, and prototypes. We used these to test and assess how the various view corridors would work, and to experiment with different building materials.

All of our material selections were governed by the design indent. From the outset, we intended to keep the installation abstract from afar – so that the experience of the periscopes would be heightened. This decision encouraged us to cover the towers in birch plywood, a seamless and uniform timber cladding. The interior, meanwhile, needed to feel unexpected and immersive. The use of gold paint and lustrous fabric became critical to creating this atmosphere.

The final challenge related to the project’s construction and reuse. In our initial competition entry, we proposed that Four Periscopes would adopt a ‘second life’ after the exhibition. This idea was formed in response to Common Good and the wasteful life cycles that often accompany architecture and design. This idea meant that all the parts of the installation – including its frame, connections and sheeting – needed to attach and detach for reassembly.

Our client – the museum – was closely involved in the design process. MAAS has a fantastic team of curators, project managers, designers and technical staff who were integral to the way we developed the project. Their knowledge and expertise undoubtedly made for a better outcome.

At the same time, the MAAS team were extremely respectful of our design process and ideas. They always supported our design intent and gave us the space and autonomy to iterate and explore potentials. They were excellent clients and collaborators, and we really enjoyed working with them.

Were there any specific requests or things you had to take into account during the design process?
A lot of the challenges were logistical. First of all, the space needed to remain open for the many events and workshops that the museum runs as part of its program. This is one of the criteria that encouraged us to produce a suspended structure – it meant that the museum could carry on, and enhance, their program in the presence of the periscopes.

We also needed to ensure the work was sufficiently durable – both for the nine months that the installation is hung in the space, and
in its future ‘second life’. This led us to use materials that would be lightweight enough to suspend, but resilient enough to withstand external weathering in the project’s future incarnations.

Finally, we needed to think through how the project would be assembled – and disassembled – within a very short window of time. The construction of Four Periscopes ran on a very quick time-frame, so this became a creative constraint for the project. 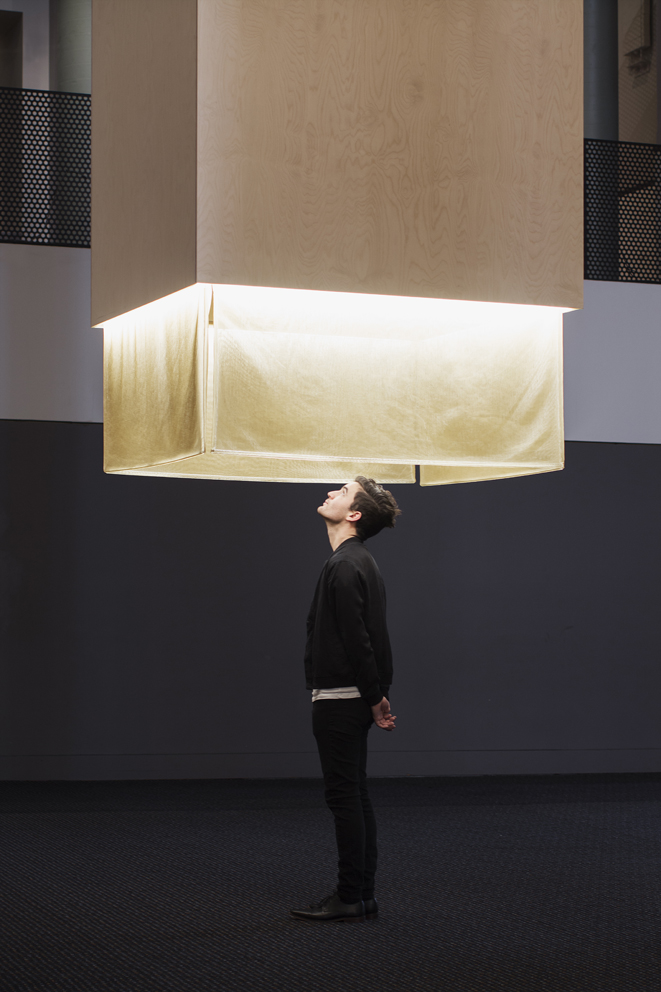 The biggest challenges probably related to the budget, as our initial scheme came back as too expensive. Fortunately, we were able to make a few small changes that still allowed the key design intent to be preserved.

What is your favourite element of Four Periscopes?

Definitely watching people interact with the work. On the opening night, it was amazing to watch people walk up, peer inside, and encounter a reflection of someone totally unknown or unexpected. Since then, we have been sent some great photos and videos that show people engaging with the work – pulling faces, waving manically, pivoting around or wandering through the space, trying to view reflections of friends and family. We like that it’s brought some fun and play into the space.

We are really happy with how the final project has come together. We’re also looking forward to seeing the periscopes evolve into a pavilion, as part of its ‘second life’.

Following the exhibition, the parts of the periscope will be reconfigured as a pavilion. A series of models – now displayed alongside the periscopes within the museum – document our ideas for how the structure might transform. We really hope this ‘second life’ ensures that Four Periscopes will remain within the museum’s collection, continuing to connect, engage and delight.