A retreat is a revered typically private space that has a personal connection with the occupant. A retreat’s physical size should, however, be considered as relative and can range from a bed in a room, to a room in a house, up to an estate in a country.

The Dragonfly project at Broken Head, south of Byron Bay, essentially involves the addition of a bedroom/studio space with an en suite sauna, patio, deck and outdoor shower to an existing holiday home. Dragonfly, however, functions conceptually, pragmatically and contextually as more than a regular addition by creating unique and personal connections, which elevates it to the sanctified status of ‘retreat’.

It’s an extension that wraps around the back of an existing house on a very small site. The addition has been designed to deliver the maximum experience within its confined space. 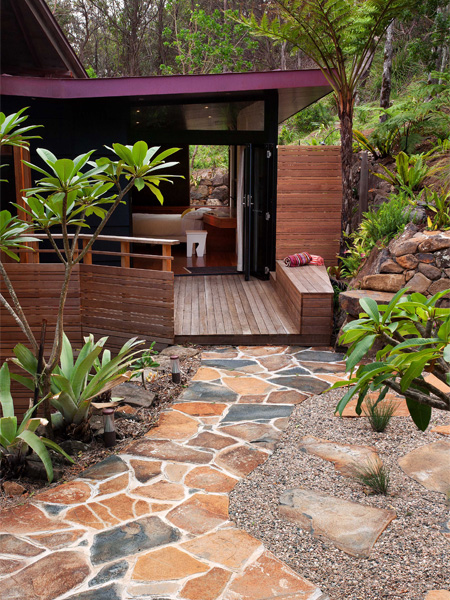 The idea of a relatively small project exploiting the potential space has many precedents. Internationally, Small House by Kazuyo Sejima and Rintala Eggertsson’s Boxhome are examples of confined living spaces, which can be considered as retreats within a larger city. Domestically, the project is reminiscent of M3 Architecture’s Armstrong Residence, where an addition to an existing home creates privates spaces by having a sense of separation.

Although unlike the Armstrong Residence, Dragonfly appears to be physically attached to the existing building. It is more accurate, however, to say that it is a cantilevering self-supporting module anchored to the hillside. The cantilevered concrete slab allows the project to be perched on both the land and the building, in symbiosis with both the building and the surrounding context, much like its animal namesake. An attachment to a home can either assimilate or reject the prevailing aesthetic. In this case the project can be described as native to its contextual environment. By respecting the overall aesthetic of the estate, which aims at maximising the life cycle of materials in a corrosive seaside environment, the project celebrates the use of copper, Australian hardwoods and operable glazing.

The copper roof forms an exoskeleton for the space by folding over and shielding it from westerly sun and coastal rain. The timber interior creates a warm and inviting internal space and external deck. This project further highlights its unique context through the strategic use of windows, which puncture the outer shell to create specific vignettes as well as to ventilate the space naturally. By wrapping around the corner of the existing house, the design enables the primary space and windowsill seat to have an inspirational view of the sea.

The forced perspective connects the occupant of the bed or the artist in the studio to the coastal landscape. There are two other vignettes created, first a corner window that focuses on the lush surrounding bushland and second a lowered window that highlights the shrubs and stones of the hillside.

Programmatically, the strength of the design lies in the duality of space; however, a space that does not signify a specific use is only that – space. The use of built-in furniture (a desk/bedside table and a windowsill couch) and the extension of the internal space to the large deck create a space to be lived in without restricting its use. Conceptually, Dragonfly is a Small House – a space separate from the family home. The functional space becomes a ‘sacred’ space through the paradoxical sense of detachment from others, but the enhanced sense of attachment to the landscape.

This is an elegant solution to the need for a separate, self contained space in a residential environment. The materials used are very attractive too. I would be interested in the cost of the project.
Thanks.