In terms of housing, Singapore is renowned for its seemingly thriving public housing scheme, noted in the fact that 82 percent of its population live in ubiquitous, overpriced high-rise residential complexes. Sentosa Cove, however, on Singapore’s holiday isle just south of the main island, is an exceptional case study.

Unlike other precincts, building regulations in Sentosa mandate, among other things, pitched roofs and enforce a ban on boundary walls in the hope of attaining some urban regularity in the plot arrangement. But such regulatory stipulations have not worked. The upshot of an apparent need to announce one’s own iconological dwelling has, conversely, resulted in a landscape of maximum difference. Driving down Sentosa Cove, visitors are given a crash course in architectural styles: the Neoclassical sits alongside tropical Modern and imperialist kitsch architecture. Vernacular tiled pitched roofs cosy up to sleek steel and glass modules, all lined up like a row of awkward adolescents along a single street. This leads to the question: how should an architect build in such a varied context? The Diamond House is Formwerkz Architects’ attempt at a critical response through the art of reduction. All the elements of a house – notably the porch, attic and roof, have been subsumed into a singular volume. Keeping its palette to a minimum, the faceted house is clad entirely in ironwood, which reads more like a sculptural object in the landscape. Instead of a projecting car porch synonymous with single dwellings in Singapore, the house is chamfered to allow a naturally shaded ‘overhang’ for the car porch. Even attic regulations that require two sides of the roof to taper off at 45-degree angles were cleverly integrated into the building form, rendering the attic itself indistinguishable from the rest of the building. The language of chamfering thus serves a dual purpose: reducing site coverage on ground while coherently integrating architectural elements into the angular mass.

While criticism may be levelled at the fact that this objectification adds to the cacophony of difference within the neighbourhood, it is also true that in an architecturally contextless site, the most banal form would constitute difference. The front of the house is of monolithic weight, except for a slice of triangular glazing revealing a sculptural twisting staircase and the full-height main entrance slit. Through this slit, the viewer is afforded a teasing glimpse from the street into a luscious landscape beyond.

The main entrance opens into the main living and dining spaces; and, to the eastern aspect, the kitchen expands volumetrically with the slope of the external wall, with strategic slits above the counter and cabinets allowing natural light and ventilation to penetrate. The upper levels are split to accommodate two bedrooms, one of which is naturally lit by a skylight. Real estate is famously calibrated around the ‘view’ and this house is no exception. The prime visual feast occurs at the back of the house, fronting a lake. The rear facade is thus the most open of all four elevations, featuring full-height sliding glass doors and windows that overlook a private pool deck. The muted singularity of the front facade dissolves into a collage of fractals at the rear, composed of discrete volumes that slip past each other. A black steel plate caps off the iron wood skin and is in turn accented by an internal wrapper of contrasting white paint. In contrast to the transparency of the back facade, the two side elevations are relatively solid, give or take a few carefully placed openings. 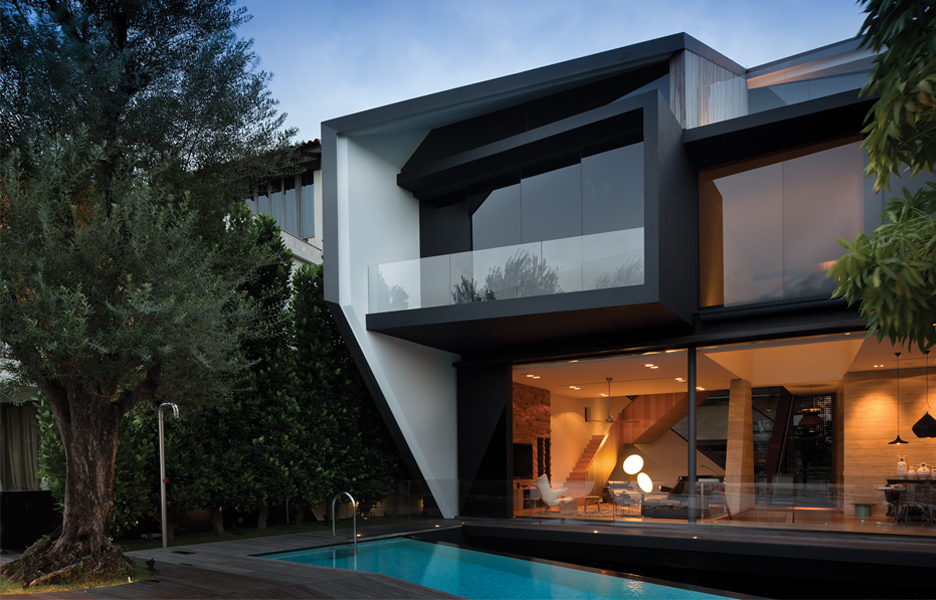 Interestingly, Sentosa Cove regulations state a requirement for a certain plot ratio, effectively limiting the buildable footprint. Consequently, the reduced on-grade floor area necessitated a sizeable basement that accommodates a car lift for two additional cars, an entertainment space, a bedroom and maid’s room. It seems that landscaping played an instrumental role in creating a basement level that is surprisingly bright and airy – light pours in through the courtyard. By condensing the requisite architectural programs into a compact prism, the house is both a product of building regulations, as well as a reaction against them. Through its pared-down simplicity, it critiques the kitsch frenzy of the precinct that is now its urban genome – the recognisable Sentosa Cove (non-) context. No house here needs a boundary wall, as their overt uniqueness makes explicit the spatial delineations.