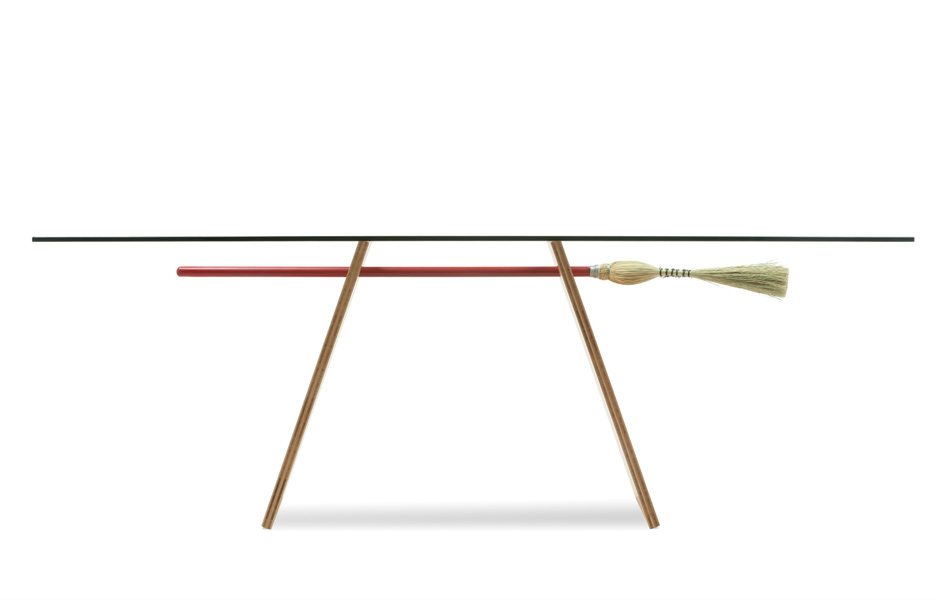 It’s difficult to gauge when a design company or manufacturer might be ready to ‘breakthrough’, as we often say, but if industry reactions during Salone del Mobile are any indication, an independent design collective by the name of Pirwi is certainly gaining real momentum. Having made a lasting impression at the 2011 festival in the Brera Design District of Milan, one of the busier areas of the central Fuori Salone showcase, word about this buzzworthy collective got out fast, with one good source dropping hints that there was interesting work to be seen in Brera by a collective called ‘Pee-wee’… No, no, ‘Pid-wee’. Pid-wha?

No wild goose chase ensued off the back of this mispronunciation. What they meant to say was Pirwi, and thankfully, I’d received the collective’s impressive catalogue earlier in the week (a hefty one-kilogram book filled with distinctive designs, driven by purpose and a bit of humour). The word ‘Pirwi’, meaning scrap wood, is actually of Mexican dialect and, thanks to a good local contact in Milan, (inside) was given exclusive access to their newest European showroom, just a few days before the big show dates in Brera. Conveniently sitting adjacent to a colleague’s office in Porta Genova, Pirwi’s still-dusty facility held a recent shipment that had just arrived from across the Atlantic.

“The Pirwi collection is placed transversally across the world’s countries and cultures,” says Hugo Kozlovsky (head of their European presence in Milan). “It belongs to the international community that identifies with that kind of Esperanto that has its roots in praxis and humanism – respect for the planet and the fun of designing and simply undertaking.”

A few days after my visit, the show was on, and the funny word was out. Reactions were beyond positive – noting very reasonable pricing that was right for the market. Even The New York Times had a photographer stop by for a shoot. By the end of the week, I returned to say goodbye to Kozlovsky and to find out how the show had gone for them. Pirwi, after its first ever show in Milan, had effectively sold out the showroom stock in Brera, with a longer list of orders signed for later in the year.

In other words, Milan was a huge success, due in part to some good positioning and strategic branding, but essentially for product that spoke for itself. Nevertheless, I can’t help but think it was also their ‘all-in’ approach in showing their product confidently. First impressions in Milan can be defining. Craftsmanship in design will always score brownie points, but people here want to hear about your story: who you are, where you come from and what you’re effectively trying to do. Pirwi certainly matches the product with a story, brilliantly.

Founded by designers Alejandro Castro and Emiliano Godoy in 2007, Pirwi began modestly in Mexico City, with the aim of making quality furniture out of sustainably grown timbers. They’ve always produced their work in small batches, incorporating the craftsmanship of local artisans – with the intention of nurturing the local economy and culture in a positive way. In the Pirwi book, the collective makes an interesting statement: “It seems that while Asia has become a large factory, Mexico, Chile, Argentina, Bolivia, Brazil and Ecuador export necessary nourishment for us in the old continent.” They’ve come to see this phenomenon as a sign of “vitality, renewal, development and hope.”

While such an earnest concept could be considered to relegate Pirwi to ‘small time’ practice for good, it has actually ended up having the complete opposite effect. In the few short years since the collective’s inception, their business plan has only become bolder, and the design itself is getting stronger.

With a roster of 16 designers, the 2011 collection showcases more than 100 furniture products and accessories – all handmade with organic birch, teak, maple or walnut from sustainably managed forests. Assembly for almost every piece in the collection is fairly ‘basic’, with its simplicity adding a key elemental feature. Natural adhesives, dry joints and seams define a Pirwi design, clearly meant to keep in focus the relationship of these objects to the Earth. Now that’s a do-good, solid bet – SOLD.