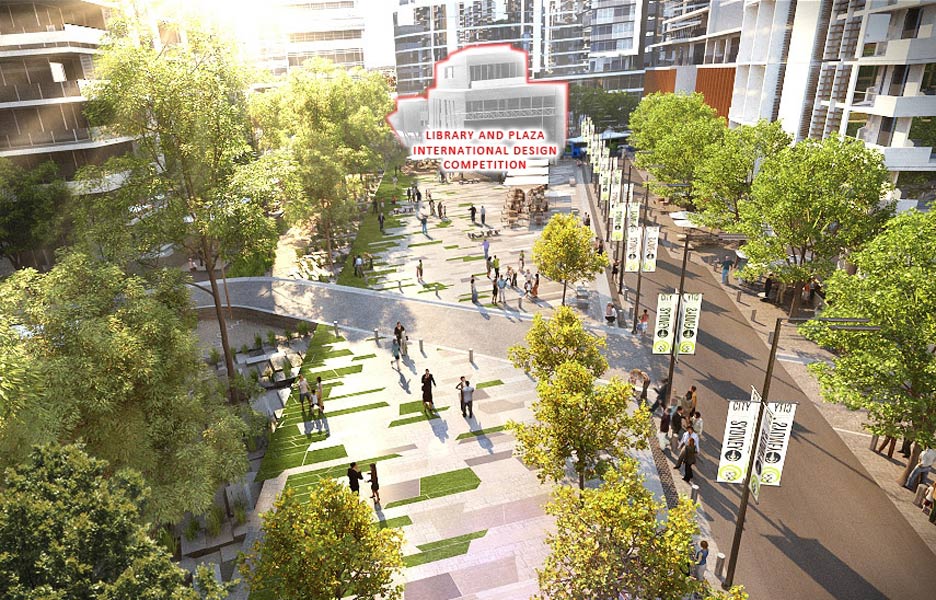 Above: Artist’s impression of the Green Square plaza and library. Supplied by City of Sydney

The City of Sydney has launched an international design competition for a new $40 million library and public square to sit at the heart of the Green Square Town Centre development.

The competition will be open to local and international architects, with a budget of $25 million set aside for a 3000-square-metre library and a further $15 million earmarked for the public plaza. Once complete, the project will serve as a community and cultural hub for the Green Square district, with the library encompassing a customer service centre, community meeting rooms, commercial kitchen and an arts and crafts space.

The new building and plaza will be one of several new facilities built as part of the $8bn Green Square project, a 292-hectare urban renewal initiative in Alexandria, Beaconsfield, Rosebery and Zetland, just south of Sydney’s CBD. The new library and plaza will form part of the Green Square Town Centre, which is being delivered by developers Landcom, Mirvac and Leighton.

Lord Mayor Clover Moore said: “We want to create a place which forms an important part of the local community. The space should pay careful attention to safety, seating, climate and circulation – but the rest is up to the vision and creativity of the architect.”

The competition calls for a “functional, flowing space” between the library and plaza, with consideration for the site’s heritage value, opportunities for public installations, easy access, in addition to “good value for money”.

This new project follows in the footsteps of a number of high-profile commissions from the City of Sydney, including the Surry Hills Library and Community Centre, designed by FJMT and completed in 2010, and the Ian Thorpe Aquatic Centre, designed by Harry Seidler and completed in 2007. Moore said she hoped high-profile projects such as these would inspire architects to work with the City of Sydney on this latest project.

The design competition will follow a two-stage format, with Stage One entries closing on 21 August. Entries will be judged by a panel of designers, architects and cultural experts – and assessed by a cost planner – with shortlisted firms required to submit detailed submissions for Stage Two.

Entries are also expected to be put on public display as part of community consultation, with the winning design announced in early 2013. The project is set for completion in early 2016.

To register for updates, visit www.greensquarelibrary.com.au