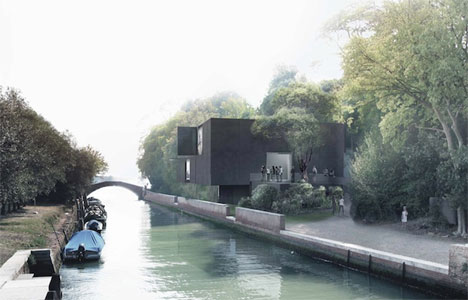 Venice pavilion: done, but not dusted

The Australia Council for the Arts recently announced Denton Corker Marshall (DCM) as the architects for the new Australian Venice Biennale Pavilion.  When the Australia Council first announced plans to redevelop the site, the design was to be the outcome of proposals from an invited shortlist of architects, but the outcry from the architectural community was overwhelming. In response to the Australia Council’s short-sighted position, OpenHAUS launched a campaign in support of a competition open to all Australian architects, artists and design professionals regardless of experience. Our petition received over 750 signatures, while numerous prominent architects and academics including Donald L Bates, John Choi and Gerard Reinmuth wrote letters of support. Many prominent Australians also backed the call for an open competition – among them, Janet Holmes à Court, John Gollings and Rinaldo Di Stasio.

The Australia Council reviewed its initial position and moved to a two stage competition process. The first stage called for expressions of interest but sadly limited the field of proposals by experience and capability. From 67 Expressions of Interest, six architectural practices were chosen for the second stage, and invited to submit their designs to the selection panel. The demographic profile of the directors of these firms was overwhelmingly baby boomer and male dominated. Knowing a range of the architectural offices that submitted EOIs, there was no lack of talented emerging practices and firms with female directors on the list.

DCM’s Di Stasio entry was cleverly pitched. It was everything a competition entry should be: a bold, singular proposal that immediately created a dialogue between client and architect. The proposal did not provide all of the answers but it did address all the right questions, simply and strategically pairing this with a strong and compelling visual. Looking at their proposal (below), amongst the wealth of architectural proposals in Di Stasio’s catalogue, it is an easy argument to make that if the ideas competition had been organised by the Australia Council, the panel would have selected DCM’s design. The Australia Council’s procurement methodology stems from the perceived need to control the outcome and avoid risk. In a risk-averse culture it is not surprising that clients seek well-credentialed, experienced practitioners – but experience does not always equate to quality outcomes and the diversity of architectural talent is left unexplored. It is the client’s prerogative to choose the proposal and the architect that they feel aligns with their vision for the project. However, in the case of a public, government-commissioned building of international significance, the fact that a diversity of responses was not generated is a wasted opportunity.

The lack of vision and community engagement currently displayed by our politicians extends to the primary body that governs and funds our arts. The Australia Council, in their need to completely control the process and in an attempt to mitigate risk, has missed an opportunity to create a lively conversation around Australian arts and architecture. It is sad and disappointing on many levels. An open competition process would have generated significant international interest and conversation around the new Australian pavilion, and in turn created a much broader conversation around Australian art and architecture and our significant contribution to the Venice Art and Architecture Biennales.

The Australian public is interested in architecture. We love Grand Designs and the success of the Robin Boyd Foundation’s open days, the national Open House events, the Sydney Architecture Festival and the crowds of people who flocked to the open days at the Melbourne Theatre Company and the Melbourne Recital Hall attest to this. If we fail to give people the opportunity to engage with architecture and the arts, socially and culturally, we will be much poorer for it.

Which leads us to the question of funding for the pavilion: all of the funds for the redevelopment of the Venice pavilion are to be sourced from the private sector. In 2010, the Australian Government spent tens of millions of dollars on the Australian Pavilion at the Shanghai World Expo, and yet the Australia Council is currently doing the rounds of the private sector. The funding of Australia’s pavilion in Shanghai highlights the value our government places on the arts. We are willing to spend money on a temporary building that is perceived to facilitate business opportunities, and yet the permanent Australian Biennale pavilion is ignored. The promotion of Australian contemporary art and architecture is a business that deals in cultural capital and as such, investment in it is important. It is interesting to note that, just like the Olympics, Australia hits well above its weight in relation to the arts and architecture but without the significant levels of funding our sporting bodies command. We can only imagine what we might achieve with better funding models.

The construction of a new pavilion in the Venice Biennale Giardini is of international significance. There are only 29 countries that have permanent pavilions in the Giardini, yet over 41 countries will be participating in this year’s Venice Architecture Biennale¹ and last year 89 countries participated in the Art Biennale². It is a great privilege to have a permanent site. The conversation and energy we have created around the design of our new pavilion does not live up to the magnitude of this event.

Public engagement is crucial to the appreciation of architecture and the arts, and the discussion around the new Australian pavilion is part of a much broader discussion that architects need to engage with. Architecture and the architectural process has the power to capture the imagination and transform the way we think about space, site, context and program. Architects are trained to see the opportunities and possibilities of a project beyond the functionality of the brief. As architects, we need to create a broader dialogue with the community; a more informed public creates a better built outcome. We need to fight for robust and engaging procurement practices for our public buildings and our public spaces so that opportunities such as our new Venice Biennale pavilion do not pass us by.

OpenHAUS Architecture would like to thank all of the people who signed the petition, wrote letters of support, lobbied the powers that be or were just plain vocal in support of an open competition for the new Australian Venice Biennale Pavilion.

A good article Christine. The selection IS as much about minimising risk as it is about providing practical exhibition space. A sad outcome, reflected well in DCM’s sketches, full of sad looking people. Just goes to prove my earlier points that the design does not inspire or uplift the human spirit – quite the opposite in it’s inhumanity.

‘Australia is the Brisbane of the world’….Barry Humphries

Thanks for writing this. These are important issues, and need to be heard. I don’t imagine that too many would disagree that the process through which we were landed with this outcome was, indeed, a wasted opportunity. In my opinion, the outcome itself was also a wasted opportunity, but any such opinion hasn’t had the opportunity to be fully tested through a truly open competition where many more ideas could have had the opportunity to live, be aired, discussed and feed cultural discourse.

This is the best news for young architects.
Why?
Because a closed shop competition resulted in a black box as the winner.
Meaning that,
In 20 years once the financiers of this deal have moved on, a third attempt to get a representative space will occur.
Hopefully in 2030 the fundamentals of the procurement will be transparent and open.

The comments are valid about lack of competition – I like the DCM design, but look in your (our) own backyard first > the AIA does not emphatically/always support open competition for significant buildings. The AIA did not and has not changed in my understanding, with State Government Major Projects only being offered to a ‘selected’ shortlist of architects. Even the State Government Architect when wanting ‘good design’ in schools selected who he thought were the ‘chosen ones’. Until we get our own house in order it is not only the Australia Council that should be criticized. Without opportunity for competition it is not only gender discrimination; don’t forget the old, young, argumentative Architects that some bureaucrat applies the bias to and excludes and, as a result, the community will lose out on what is most important – the best design outcome.

A good point Peter, but as far as I can see it, the AIA’s own issues have little to do with this competition in particular. It is the principle of striving for the best possible design, not just process, due diligence or risk minimisation that I am interested in. I think the profession made it crystal clear in private submissions to the Australia Council that it had it wrong the first time. The result was a compromise and so is the design. One could therefore argue that the brief was satisfied completely. This is Darwinian selection in architecture.

Jorn Utzon was hardly a tried and tested architect when he won the Sydney Opera House competition. In the end with that project, good design was not allowed to be fully realised because of risk averse, visionless conservative bureaucrats, and we are dealing with the fallout to date. I agree with Paul, in 20 years it will be time to re-imagine the black box, rip it apart and make use of the ridiculously expensive superstructure to remake the building into something that elevates the human spirit.

I would agree with Peter Hirst in respect to the courage (or lack of courage) within the AIA when it came to the Australian Pavilion design.

This may well be true, but the Institute had a choice to NOT support a competition process which disenfranchised hundreds of architects. Seriously, they only got 65 entry submissions for the most prestigious commission in recent times. The AIA shares the blame and consequence of a process that was elitist, irrational (as it had nothing to do with the reality of getting a project designed and built for Venice), and which is now treated with little to no interest from the architectural profession, much less the public at large.

The AIA did more than just “allow” the competition be to be sanctioned; it validated this discredited process by having the AIA President as a member of the jury. If the AIA could not exert more influence on the Australia Council, then it should never have lent its legitimacy. This was such a weak response – especially in the face of a clear statement by many, many architects – that it was only increases the sense of powerlessness and irrelevance of the Institute.

First look at the Australian Pavilion for the 2020 Venice Biennale