Exiled in New York in 1943, a star trio of Spanish architect-planner Josep Lluís Sert, Swiss architectural historian Sigfried Giedion, and French artist Fernand Léger collaborated on a miniature manifesto entitled ‘Nine Points on Monumentality’. They banded together to bemoan the lost agency of architects, who they claimed had been reduced to creating ‘utilitarian buildings’. Anticipating the opportunities that would come from post-war reconstruction, their nine points called for a new age of stirring monuments, rising from Europe’s ruins. Little did the three know that their utopian dream bore an uncanny resemblance to the Welthauptstadt (‘World Capital’) Germania planned by Adolf Hitler and Albert Speer.

As an exile in present-day Sydney, even the opportunities afforded to architects in the 1940s seem a far-off dream, and Sert, Giedion and Léger’s aspirations naive. While in their day, the most well-respected architects were rewarded with the most important commissions, in Sydney the case is almost the reverse. Possibilities for significant projects are typically outsourced for high-profile foreign architects to squander. Our own high-profile names, such as Murcutt, Lewin, Neeson, Stutchbury, Durbach and Block, have to date been associated mainly with small-scale work, such as single residences or alterations and additions. Of course, there is nothing intrinsically wrong with small projects, but as is often the case, modest projects engender little respect from clients, councils and the community. Unfavourable sites, prohibitive controls, petty objections and measly budgets can easily compromise grand architectural visions. Architecture always adapts its formal and theoretical concerns to match its scope of influence. This is why, in 1977, Robert Venturi urged his colleagues to learn from Las Vegas: North America’s monuments were leaving architects behind. Despite (and because of) their limited scope, contemporary Sydney architects have replaced monumentality with singularity as an aspiration. Their aim is to create a mode of expression that rises above the mundane. In architecture, use of the term ‘singularity’ is relatively new. It describes an aesthetic unity, without the loss of programmatic amenity or spatial complexity. To achieve this requires painstaking commitment to detail and consistency, particularly where consultants, corners, roof planes, mechanical exhausts and drainpipes, safety measures and heritage overlays come into play.

As this most current of its projects attests, Chenchow Little is masterfully accomplished when it comes to achieving singularity. Led by Tony Chenchow and Stephanie Little, the Sydney practice has garnered a slew of awards for creating houses of striking sculptural cohesion. Of course, it is no stranger to restrictive budgets, difficult clients or draconian council codes. So how is it that it consistently succeeds where others fail? I asked Chenchow for the secret. His answer was twofold: he begins every project by taking the client’s brief and paring it back to the minimum. He then extends the brief in ways which were not specified at the outset, but which emerge from the design process. This method is also applied to the design itself, where conventional details are stripped away and new ones added. In addition to these procedures, in recent projects Chenchow and Little has ingeniously shown how imperfections in council development controls can be manipulated to create striking buildings in conservative areas. The dark triangulated envelope of their 2009 Pitched Roof House responds cunningly to the local council’s requirement for an angled roof in keeping with the suburban surrounds; only the constraint was specified, not the aesthetic outcome, and Chenchow Little pounced. The Skylight House was to be a straightforward extension to an existing terrace house, on a heritage-listed street in harbourside Balmain. However, the footings of the house sat half on rock and half off, and during demolition the entire terrace caved in. Despite a total rebuild being necessary, Leichardt Council maintained that no changes were allowed to the property’s street frontage. The front of the terrace had to be rebuilt to precisely emulate the historic character of what had been there before. What escaped the councillors, but not Chenchow Little, is that the side walls of the house are also visible from the street. So while the architects were forced to replicate the balcony and cast iron balustrade of the previous dwelling, from even the slightest of angles their intervention is clearly visible. The side walls stretch upwards and away from the Victorian-style facade to form the sharp profile of the dual skylights, which give the house its name. A graphic black zinc roofline exaggerates the silhouette of the skylights, and articulates where the line of the traditional roof would have been. Like racing stripes down a sports car, the apparent lines of structural force (actually recessed gutters and flashings) are traced in black zinc down the walls. The effect of all of this is that, from the street, the relationship of the ‘old’ and ‘new’ parts of the house are immediately visible, bound together in a single, arresting form. As I approach the Skylight House on a bright summer day, the balcony’s bay windows have been thrown open, allowing a tantalising glimpse of the sky-lit space within. There is an almost church-like flood of white light. Chenchow describes the project, built for a retired couple, as an ‘inverted terrace house’. In traditional Sydney terraces the living areas are on the dark and airless ground floor, while the bedrooms are above. Here, the living spaces are on the light and airy middle floor. A bedroom and a study occupy the ground floor, with the master bedroom on a small third level. The main feature of the house is its living space, illuminated by the two immense skylights. The skylights are angled to admit soft southerly light, with intermediate aerofoil blades positioned to diffuse glare and support the vast sheets of glass above. Alternating strips of light and shadow animate smooth white walls. One of the retirees is a painter, who desired the living space as a place to work. Accordingly, the architects conceived of the middle storey as a concrete tray that anchors the structure laterally, negating the need for cross walls as bracing. The tray constitutes a datum that ties the floating middle storey to the earth. From the courtyard at the house’s centre, the ground plane appears to fold up into the living space, and fold up again to support the walls. Reminiscent of Alvaro Siza’s Summer House in Sintra and, more locally, MAC Interactive’s Stirling House in Redfern, the datum also creates a visual continuity that ties the house’s disparate spaces together. It continues through the other side of the courtyard into the dining space, where it is expressed in timber. Continuity is also achieved by blurring distinctions between inside and out. The floating concrete steps that rise from the courtyard to the living space are bisected by a sliding glass door, which allows for multiple spatial configurations and dissolves the line of threshold. Between the dining space and a rear yard, the ceiling curves down to conceal a strip of lighting. The curve obscures a view of the back door, making where room ends and yard begins ambiguous. 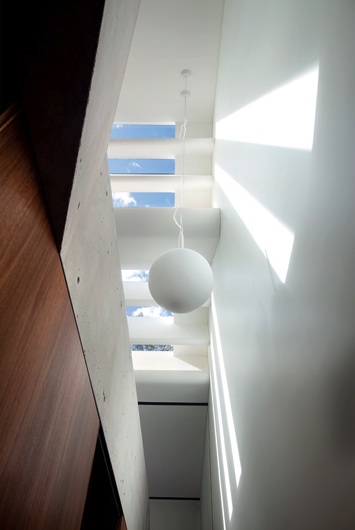 Writing in The Guardian newspaper, critic Rowan Moore recently declared: ‘Architects still work hard, and test different ideas, but they search more for a magic formula in the cladding or the form which will make the whole building smoothly beautiful and consistent.’ This is undoubtedly true of Chenchow Little’s approach. What is remarkable is how the architects are able to apply this ‘magic formula’ to even the most unprepossessing of situations. Their Skylight House takes the fight for singularity over fractious circumstances to the extreme. However, we should not dismiss the work of the architects as mere form-making. The ingenuity and craftsmanship of their residential projects demonstrates an intellectual rigour, which merits testing at more monumental scales. David Neustein is the Sydney editor of Architectural Review Australia.

BEAUTIFUL, this is my dream house. Fantastic detailing ! The stairs, the stairs !!!

Another brilliant example of Chenchow Little’s magnificent contribution to the Sydney architectural landscape, presented admirably in a well written critique by David Neustein, whose articles are always constructive and informative.

These now famous stairs were made by boutique precasters 2barrows, based in Sydney.

The design rules of Chenchow Little