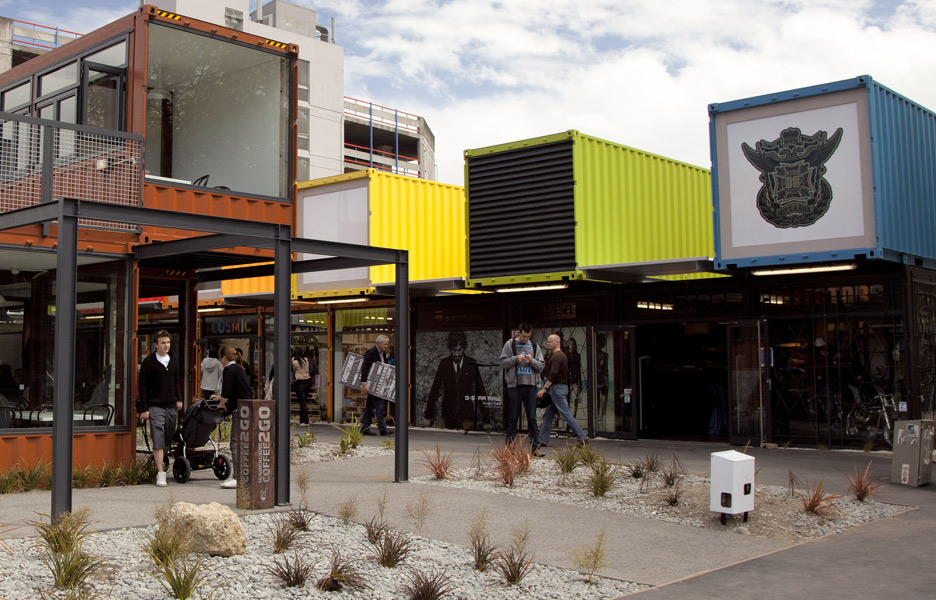 ‘The New Normal’ is a phrase you often hear in Christchurch these days, uttered with characteristic local irony. Devastated by the series of major earthquakes that began early in the morning of 4 September 2010 and lasted for more than 15 months, everyday life in the city is of course far from normal. In the central city alone, nearly 800 buildings have been demolished and there are many more to come down before the red zone cordon is lifted. ‘The New Normal’ describes the myriad adjustments to daily life that Christchurch locals have had to make in the aftermath of the quakes: changed traffic patterns, constant roadworks, the torch under the bed, the mobile phone kept constantly charged, the portaloos that are still being used in some suburbs.

While reconstruction of the city hasn’t started yet, temporary buildings made from converted shipping containers have popped up on vacant sites: dairies, an art gallery, a furniture shore, boutique dress shops, bars and cafes. And in the central city an entire shopping precinct has been built from them. The Re:START Mall opened in late October 2011, the initiative of a group of retailers who anchored their development around Ballantynes, the venerable Christchurch department store. Around 60 shipping containers–stacked and placed in various configurations, pierced with windows and folding doors and painted in a bright and cheerful palette – have been fitted out as high-end shops and cafes.

Re:START is built on the site of the old Cashel Street pedestrian mall, whose Victorian and Edwardian commercial buildings have been largely demolished. Only a couple of buildings remain, isolated in space. Re:START includes a specialist grocer, a handmade shoe shop, an independent bookstore, a lingerie boutique – the kind of shops, in fact, that used to populate the buildings in the historic part of town (the part of the city worst hit during the earthquakes, when ornate concrete pediments and brick facades collapsed over the street).

When Anton Tritt of the Buchan Group was appointed design leader and project architect of Re:START, he had just finished designing a container house in the Port Hills. Driving home from his office every day over the Waltham Road overbridge, he passed the shipping containers stacked high in the railway yards. The containers provided an obvious solution to the problem of building a temporary shopping precinct in an earthquake zone. They’re strong, modular, ubiquitous and most importantly exude a sense of safety in a city fraught with architectural danger. Their very mundaneness was a recommendation. “We’re an export nation,” says Tritt. “We’re used to shipping containers.”

There is no firm finish date for Re:START, though it will start to be reconfigured as new buildings are built around it. In the end, I expect that the converted shipping crates will be scattered around the region, becoming freestanding shops or even holiday homes.

There is a long New Zealand architectural history of repurposing modular buildings. In the 1960s and 70s, ‘baches’ (beach houses) and sleepouts were commonly built from the crates used to import car parts. When I mention this to Tritt, he laughs, recalling holidays spent stripping down plywood car crates with his father for extensions to the family bach. “New Zealanders use what’s to hand, what’s affordable,” he reflects. “We have to be clever with what we’ve got.”

In fact, at architecture school Tritt studied the work of Louis Hay, one of the architects responsible for the rebuilding of Napier in the Art Deco style after the M7.8 earthquake of 1931. (Tritt comments that the Art Deco style met the needs of post-quake Napier, with its stripped-back detail and lack of dangerous pediments.) Faced, like Christchurch, with the wholesale rebuilding of the city centre, the burghers of Napier constructed Tin Town, a temporary shopping precinct built of corrugated iron that lasted for three years.

The biggest constraint on Re:START was time, with an eight-week building period for the shops and public areas. This included the provision of power and drainage, as all essential services were damaged in the earthquakes. Tritt says, “It could not have been done without the goodwill of everyone involved.” Volunteers from out of town grew plants for hanging baskets, and others assisted landscape architects Rough and Milne with planting. Access was a problem, again solved by goodwill and good communication. They were building in a live disaster zone, behind a cordon manned by the New Zealand army. When the precinct opened to the public, it was a symbolic reclamation of the city by its residents.

When I met Tritt at the mall, although it was mid-week and a hot autumn day, it was bustling with tourists and local families, as indeed it has been every time I’ve visited – at the weekend it can be extremely crowded. I’m particularly struck by the sociability of the public spaces. The edges of the colourful container buildings are as important as what’s inside them. People sit, chat, drink coffee, listen to music and the spaces are intimate, sheltered, on a human scale – they find a receptive public. People clearly feel safe there and they relax. There are many lessons to be learned from Re:START about the construction of public space in a new city. In effect, the mall itself is a tiny purpose-built city in the middle of a vast wasteland. As Tritt comments ruefully, parking is no problem. It is so lively and cheerful that you forget, for a while, the great strangeness of its context.

As I leave and head towards Ballantynes, I’m stopped in my tracks by an operatic soprano singing the aria from Catalani’s La Wally, the song that featured so prominently in Jean-Jacques Beineix’s Diva. As the busker’s voice trembles and rises in the small plazas between the shipping containers, and the northwest arch frames the city, the sound of jackhammers swell like a chorus behind her as the high-rises are demolished around us. It is the New Normal.

Not shipping containers-modular building units
Much more socially acceptable.
Good to see more of them being put to practical use