The long-standing discussion around the relationship of Australian architecture to its landscape has shifted a little in recent years. Faith in the exultant proposition of ‘touching the earth lightly’ has eroded with the dawning realisation that the production of architecture is an invasive act on the landscape. Along with this however there has also emerged a greater understanding of the land. Respect for indigenous plant species has grown, ideas around ‘drought-proof’ planting have become necessarily fashionable and a focused appreciation for the complexities of the Australian bush has become much more widespread. Natural disasters of fire and flood have prompted a questioning of the role of architecture in a bush context – should it resist natural forces, or work with them to its benefit?

Wood/Marsh Architecture has long had respect for the land, but this is a respect prompted by the reading of site by land artists embracing the formal language of Richard Serra or Robert Smithson. The formal qualities of Wood/Marsh’s brilliant and much-lauded ‘sound walls’, arcs of textured precast concrete that track your journey along Melbourne’s Eastern Freeway, define this position clearly. But be it the Shadowfax Winery at Werribee, ACCA in South Melbourne or the recent Yve and Balencia housing projects on St Kilda Road, the directness of formal expression in Wood/Marsh’s work is striking.

Wood/Marsh was recently awarded the AIA Victorian Chapter Sir Osborn McCutcheon Award for Commercial Architecture for the Port Phillip
Estate Winery. Located near Red Hill on the Mornington Peninsula, south-west of Melbourne, the surrounding area is a beautiful wine region of dramatic rolling hills that occasionally subside to reveal epic views out to Western Port. This is a manufactured landscape, once dominated by farming but now structured by the fine lines of vineyards. Port Phillip Estate presented a new challenge to Wood/Marsh, allowing for the implementation of a strategy towards a rural Australian landscape on a scale that had previously eluded the practice. What we are presented with is a collection of massive rammed limestone walls that sinuously calibrate the rolling topography. ‘We wanted to create an architecture that was emanating from the landscape,’ explains Roger Wood, ‘but with the [formal] idea that an ancient whalebone or giant piece of bleached driftwood has lodged itself on the site after the tide had gone out.’ On approach the visitor is greeted with intersecting arcs of limestone, nestling into a spiky native garden, and a large pair of timber doors. Once through the doors, the dramatic theatre of the view (and its denial) makes for a spectacular entrance to the space, offering a panoramic outlook over the vineyard to the ocean. Framed by massive radial timber beams, the curves of the plan peel away to the north and south with walls of simple, black-framed glass. Effectively, you enter the site at its highest point into the front of house, with a restaurant to the left and wine tasting and private rooms to the right. The ‘working’ components of the facility are stacked three storeys below, embracing the advantage of the sloping site. A member of the AIA jury for the Commercial Architecture award commented that the plan was ‘very sexy’. The 2D representation is an exotic collection of curved walls, with layers of function peeling off the main arcs to cleverly structure and conceal the operational side from the visitor. As with many Wood/Marsh projects there appears a slight awkwardness in the way that junctions are made in plan, but when experienced the intense spatiality of the architecture erases any doubts in this respect. The poetic simplicity of Wood/ Marsh’s spaces is persuasive, the apparently effortless formal and material expression concealing a beguiling complexity. At Port Phillip, the fact that a working winery is able to be buried in a hill and maintain a dynamic relationship to program is a significant achievement. 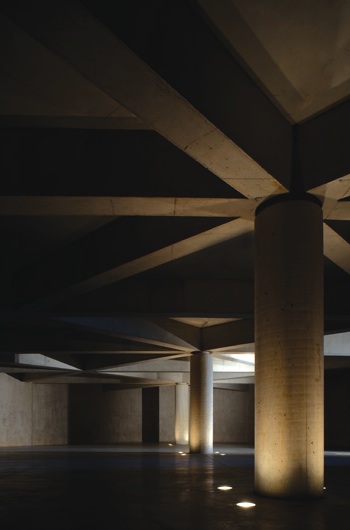 Back in the restaurant/cellar door the material palette is perfect. ‘We wanted a space that spoke of rustic elegance,’ says Roger, ‘A monochromatic [space] that allows the architecture to retreat.’ The detailing is typically restrained and composed with blackened steel and chunky timber, becoming the foil for the white limestone. The space is surprisingly quiet, the acoustic ceiling held in place by herringbone timber battens that draw on the timber boat making processes much admired by the client. The descent into the core of the building is via an incredible, heroic staircase, two limestone arcs plunging deep into section and taking the visitor along with them. Down below, the architects have cleverly utilised the immense thermal mass of rammed earth and concrete to create a space that boasts qualities very close to those of a French cave (the ultimate goal for wine storage), and again the slope of the site has allowed significant quantities of earth to be layered over the subterranean volumes. The barrel hall itself is a highly atmospheric space, with strategically located lighting and a coffered concrete ceiling. Adjacent to the hall is a sliver of space between two arcs that is a connoisseur’s tasting room, with direct access to an archive of excellent wines stacked in blackened steel racks. The adjacent, relatively compact processing area is a tall, flexible space that opens onto the industrial backend characteristic of all wineries. At Port Phillip, this is supported with a collection of advanced technological systems that monitor the performance of all equipment, including that related to the architecture. But it’s not all hard work in the basement, as the view through the large door is magnificent and arguably better than that of the restaurant. The rare feature provided by this winery is several rooms for guest accommodation. Nestled under the restaurant and in contact with the ground are a series of ’boutique hotel’ suites that resist the usual hip hotel tricks. Roger describes them as ‘comfortable, but containing things that you wouldn’t necessarily have at home’. Drawing on Wood/Marsh’s work at the Sofitel Hotel in Werribee, the rooms have a refreshing generosity, layered with the rich texture of a collection of Bill Henson photographs in each room. They are private spaces that allow direct connection to the land through a veiled terrace. The unseen element of this project is the client and his family. An electrical engineer and entrepreneur, he drove the environmental aspects of the project, demanding in particular a continual assessment of the lighting. Through strategic provision and the careful selection of fittings, he has created a dramatic but effective solution that is remarkably low in energy consumption.

Port Phillip Estate is not an indulgent piece of wine tourism. It is a sophisticated production facility that embraces the advantage of its site to craft a collection of poetic but performative spaces. Its architecture questions the relationship of built form to landscape and seeks to innovate in aspects of this partnership. Vintners have begun to understand the vast differences of our Australian landscape, charting its regions and sub-regions through climatic shifts, topographic particularities and terroir – evidence that the pursuit of a singular Australian architecture is a flawed ideal. At Port Phillip Estate, Wood/Marsh demonstrate that our architecture requires a careful understanding of the condition of the land and a response that is challenging and compelling.

Martyn Hook is the Melbourne editor for Architectural Review Australia, associate professor of architecture at RMIT and a director of iredale pedersen hook Architects.

Very Creative and modern facility; this is a must visit

Heritage inspires a sculptural take on a seaside house