Like a series of giant meshed golf balls, Melbourne’s new Rectangular Stadium, or AAMI Park, sits on the banks of the Yarra just upstream from the famous Olympic Pool, and opposite the other sports buildings that collectively have become Australia’s foremost urban sports precinct, Melbourne and Olympic Parks.

“Brilliant arena lights up our city of sport” claimed the special colour lift-out on AAMI Park that came free with the Herald Sun recently. The building wasn’t completely finished, but ‘the death star was fully operational’, you might say. Indeed, there is a real sense of the space age with this new sports stadium, the use of domes and triangular facets recalling the futurism of Buckminster Fuller. Here, though, the domes are intersecting and supporting one another, making for a brave new kind of building. The Melbourne and Olympic Parks precinct started with the Melbourne Cricket Ground and began growing in 1956 with the addition of the Olympic Pool and Park. Borland and McIntyre’s Pool was a key early sports building expressing dynamic structure, and here COX Architects have knowingly entered again into this tradition, which in many respects they have made their own. The addition in 1988 of the National Tennis Centre (now Rod Laver Arena), by Philip Cox and Peddle Thorp solidified the precinct. The more recent buildings are mostly white, and this is directly due to the Cox legacy, not only in the new stadium and the Tennis Centre, but also the deeply flawed Hisense Arena (2000), a confused copy of the Tennis Centre by Peddle Thorpe, made without the involvement of Phillip Cox. The project continues a now long tradition of innovation in sports architecture by COX Architects and Planners. This tradition starts with the National Athletics Stadium, Canberra, in 1977, which used tensile roof cabling to support a heavy cantilevering roof. Working with Arup as structural engineers, the innovation in the Rectangular Stadium, which otherwise employs very traditional arch and dome principles, is the use of 3D steel elements optimised through software – with the aim being to reduce the total quantity of steel needed. The dome, a form often rejected in architectural modernism, is employed for both its formal presence and structural efficiency – spanning elements are fundamentally more efficient as an arch, rather than horizontal. Instead of one dome, the series of interlocking domes provides the perimeter condition needed for covered external seating.

Watching soccer or rugby on an oval ground can be a distant experience; the difference here in proximity and intimacy is remarkable. Once inside the stadium, the opposite long sides are close and parallel, the crowd opposite is directly visible – you can see their faces. Tiers on the long edges of the ground, on the east and west sides, are taller than those on the shorter north and south sides. This maximises seating on the long edges, the primary seating areas. Distance from the pitch to the ‘worst’ seats has become a key measure of the quality of a stadium, and this stadium keeps that at a low figure, despite housing just over 30,000 people. The capacity of the ground was increased during the commission from 20 to 30 thousand, and while this pushed the design harder, the premise has remained unchanged. The increase in capacity followed a trend of soaring attendance at Melbourne Victory games, as they became the premier team in the soccer A-League. The facilities are home to Victory and the troubled rugby league team Melbourne Storm, but are also the administration base for the Melbourne Football Club. As a result, the building has offices, multiple change and treatment rooms, pools and a large gymnasium contained within its extensive semi-basement, which, despite its hidden nature, enjoys a fair slice of natural light. The second seating tier houses flexible linear function spaces that maintain a sense of proximity and connection to the pitch. One key consequence of the domed roof is that it tilts into the arena (the exterior surface of the north and south domes is readable from within the arena, as you get higher in the seating) and that it allows views out of the arena to the city beyond. This also allows extra north light onto the pitch. The cladding of the domes, visible inside and out, is insulated white steel panels, interspersed with varying numbers of glass panels located by orientation and views out. Solar gain through these glass triangles is mediated by a triangular fret pattern on the glass. As for the interior public spaces, the architects made a very clear statement to me: “This is not a shopping centre.” This is a welcome change of emphasis in sports buildings, where confused designers have often sought to emulate something in-between a shopping centre and an airport internally. The building fronts and gets right up to Swan Street, giving frontage to some of the key groups based there. The canopy cantilevers over this area forming a protected walkway, which then opens into two large stairs either side, the main public entries. From this elevated deck, entries take you into the sheltered concourse, a highly protected outdoor space that wraps all the way around the ground. In here, the two building systems meet – the white domes and the stand itself, which is predominantly grey. The bubble-like dome roof envelops and forms a screening wall of white steel and glass, a lighter system. The robust stand is a combination of different forms of concrete, including large spanning precast beams for the seating tiers, hollowcore concrete beams, in-situ and concrete block. Applied to these surfaces is a system of signage in green, also designed by the office. This colour then continues in both the subterranean areas and in the distinctive seating around the pitch itself, which successfully aims to blur the boundary between pitch and viewing areas. 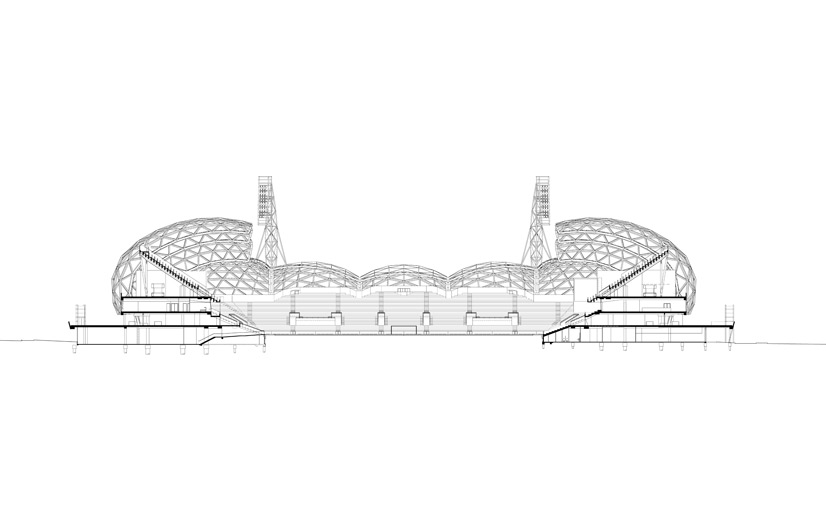 The interconnected domes act structurally together as well as alone – the height increasing in the middle of each side, and as a result the leading edges facing into the sportsground work a large arch themselves, transferring the end load to the squat and more muscular corner domes. Within the wireframe structural web, only two sizes are used, but these have been optimised structurally through software – the wall thickness of the steel circular sections are then adjusted to suit. This makes the optimisation less visible than it is on say, PTW’s Beijing Water Cube, where the steel diameters vary, but it makes junctions more consistent. One of the key challenges presented by this complex enclosing surface is drainage – each structural line has a gutter that transfers into main gutters placed in the valleys between the domes and along the leading edges. I have previously argued, in this magazine and elsewhere, that Philip Cox has perhaps been Australia’s most influential architect – creating an architectural style with an approach that is beyond structural expression, that belongs simultaneously to worlds of both architecture and structure. As the work of the wider practice of COX has become more complex in its authorship, it has evolved from the white steel and cables that defined it and pushed it into the international spotlight in the 1980s and 1990s. COX’s work continues to innovate in the structural, and is strongest when on this path. This is seen in the recent Kurilpa Bridge in Brisbane, and here in the Rectangular Stadium, a shift from the earlier, influential style of COX to an approach that positions optimisation within the discourse around sustainability – its reduced material usage making a powerful argument that structure has a key role to play in the debate.

Does your practice have a communications plan?