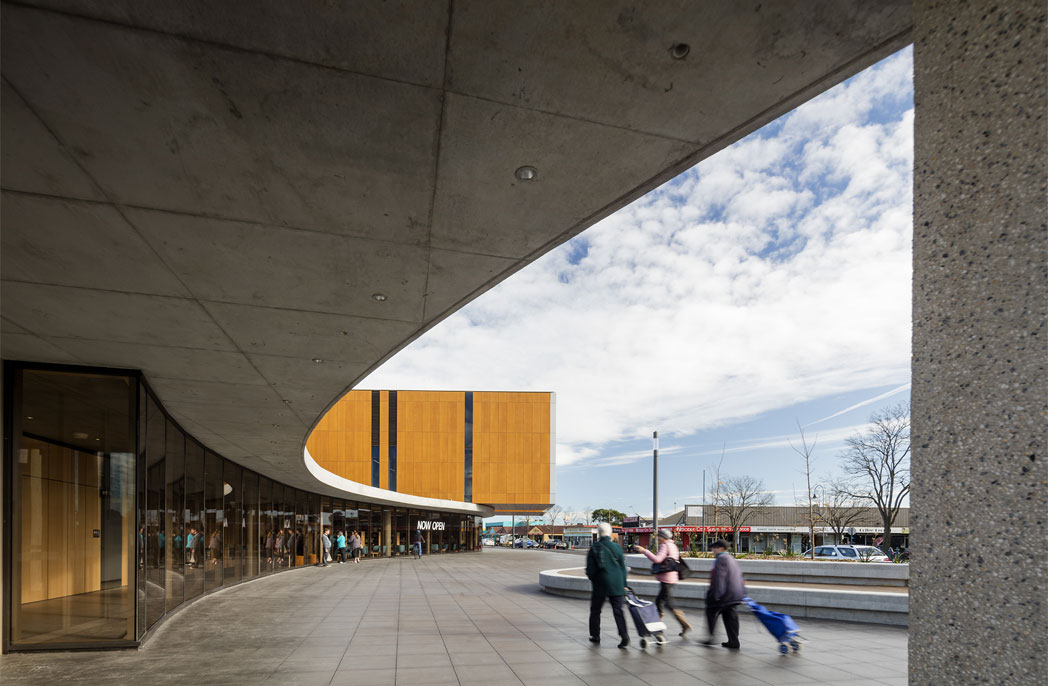 Wedged between a regional train line and the town of Moe is the Frank Bartlett Library & Service Centre designed by fjmt. The new civic building has been named a Global Award winner at the Shaw Contract Design Awards. The five winners, chosen out of 497 entries, have been announced today. For an Australian project, the win is a huge coup on an international stage. ADR chats to Geoff Croker, principal at fjmt.

A driving purpose of the new library and service centre is to sensitively join the small town of Moe, in Victoria’s Gippsland region, back together. With a busy freight and passenger train line slicing the town into two, the new building presented an opportunity be a new centre point for the area.

As a revitalisation project, Croker explains the important role this project has had for the region, “It’s a really green building on what was a greyfields site. The project is about revetting a piece of the city, which was previously just the back of some disused shops. It’s important for the revitalisation of Moe.”

In addition to re-livening the town, the project responded to its surround context. “We were keen to take advantage of the views of the adjoining mountain ranges – the Strzelecki and Baw Baw. These two elevated forms are on an axis with the main street. At the end of that street is a view of Mount Baw Baw, so in the winter you can see the snow capped peaks. For this project we wanted to activate as much of the town as we could.”

Bringing the community in
Any civic project of this scale requires consultation with the community and the Frank Bartlett Library & Service Centre was no different. Croker elaborates, “This project required a lot of stakeholder engagement, so we had a community meeting in the town hall. Everyone in the city was invited and there was a lot of conversation about the design.

“We worked with multiple user and community groups throughout the process – librarians, visitors to the library, the historic society – and they were all engaged at different forums as the design progressed.”

The design
The final design offers an expansive and large forecourt along with a mix of interior spaces. It’s both open and welcoming while offering a place of respite.

“It’s more than just a library, it’s also a community space and kitchen and there is a rooftop garden, which is a publicly accessible green space with excellent views of the surrounding landscape and the trains arriving from Melbourne. There’s also a plaza, which is north facing – it’s designed to be a new heart or centre for the city. A place where Moe can have markets and things on the weekends,” says Croker.

A striking feature inside the space is an undulating ceiling.  “The curving ceiling gently positions the building in an artistic way to take advantage of the views to the north while maximising some warmth. The windows on the south, which face the train tracks, are smaller. There’s a lot of logic in how the building works,” says Croker.

Other references from the surrounding landscape make a subtle appearance, Croker explains. “In plan form, the building is very sinuous, it sort of takes on the form of a river. Historically, Latrobe Valley would have had water running through the valley and the building picks up on that.”

Sustainable features played an important role in the design, including a displaced air conditioning system with night purge. This level of thought also went into the finishes; locally sourced timbers were used, along with Shaw’s Beyond the Fold and Pacific collections for the flooring – its cradle-to-cradle methodology being a deciding factor.

When reflecting on the project, Croker adds that “in a country town, and even in any town, these kinds of civic spaces are really important.”

All photography by John Gollings.

Take a look at the history of the State Library of Victoria here.