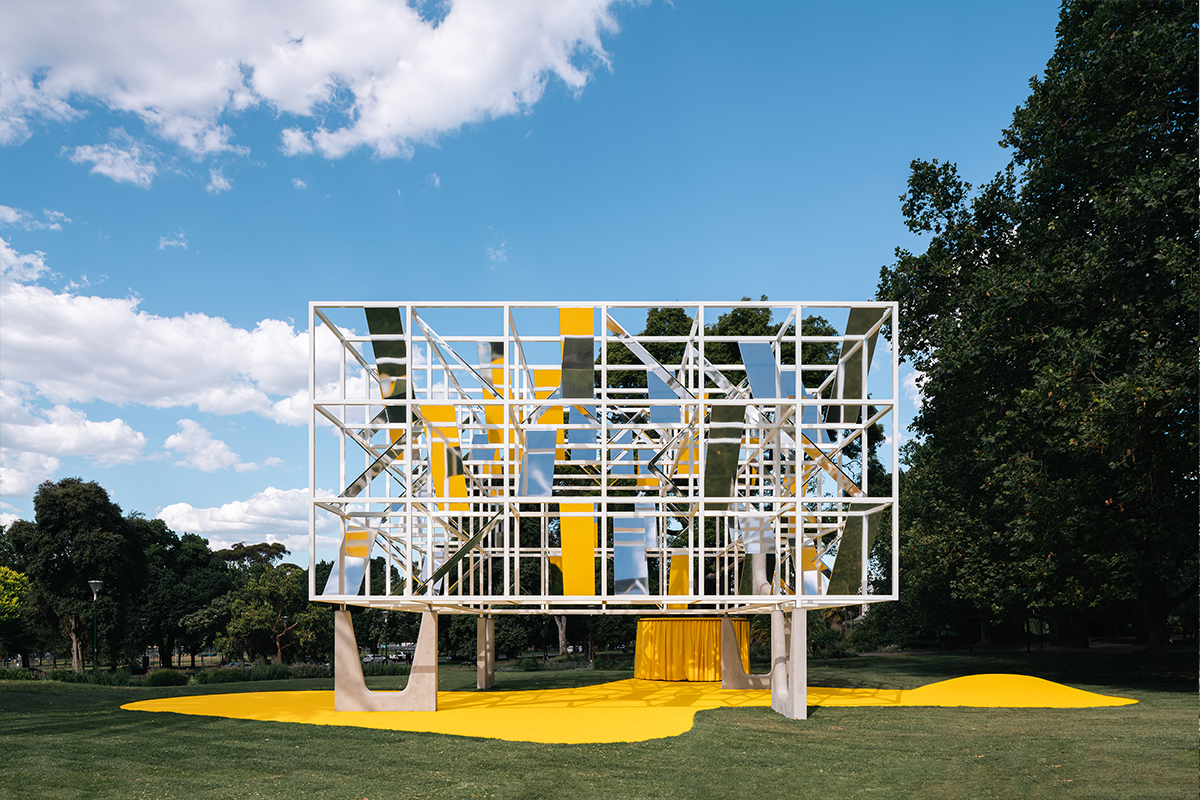 MPavilion 2021 was officially opened earlier today with the shimmering structure dubbed The Lighthouse by its designers MAP Studio (Venice).

The Venice-based architects behind the kaleidoscope structure spoke to ADR earlier this year about their design, which they describe as an “urban lighthouse” designed to be a beacon of joy in the wake of Melbourne’s prolonged COVID-19 lockdowns.

MPavilion 2020 was impacted by the Victorian restrictions, with organisers – the Naomi Milgrom Foundation – making the decision not to commission a new pavilion, preferring instead to host a series of virtual and live events in its past pavilions, which are scattered across the city.

MAP Studio directors Traudy Pelzel and Francesco Magnani designed 89 angled mirrored panels for this year’s installation – each “acting as a container of ideas” that reflect and amplify both the people and cultural activity planned for the coming months.

The MPavilion 2021 program will feature more than 400 free events, workshops, talks, performances, community projects and installations from now until 24 April 2022.

On what is its opening weekend, you can catch five Melbourne Music Week events, including A Mindful Morning with Rich Moffat & Alex Albrecht; an Afternoon in Naarm with First Nations artists spanning acoustic, hip hop, pop, storytelling and spoken word, and an evening of transcendent dance with Dutty and Tribqu.

But visitors don’t have to attend any events to explore The Lightcatcher.

The mirrored kaleidoscopic cube, which features an open steel structure on four u-shaped concrete columns is open 24/7 and accessible from Queen Victoria Gardens.

“In our minds, the kaleidoscope structure takes on a double meaning of an urban lighthouse to gather people around as an expression of new hope and to glitter our minds into appreciating new horizons,” explained Pelzel at the unveiling.

“But it’s also a kind of warning.

“It is not a shelter in nature as the previous pavilions were, but an element of amplification of human activities in nature, as a metaphor of man’s current condition—inspiring an aspect of new awareness of this fragile situation.”

Melbourne’s MPavilion 2021 will run until 24 April 2022. See the full program on the MPavilion website.

In 2019, Glenn Murcutt’s pavilion was inspired by his experience resting under the wing of an aeroplane in Mexico more than 30 years ago.

Earlier this year, the Naomi Milgrom Foundation released MPavilion Encounters with Design and Architecture, which chronicles the first six years of the project with contributions from each of the MPavilion architects from 2014 to 2019.